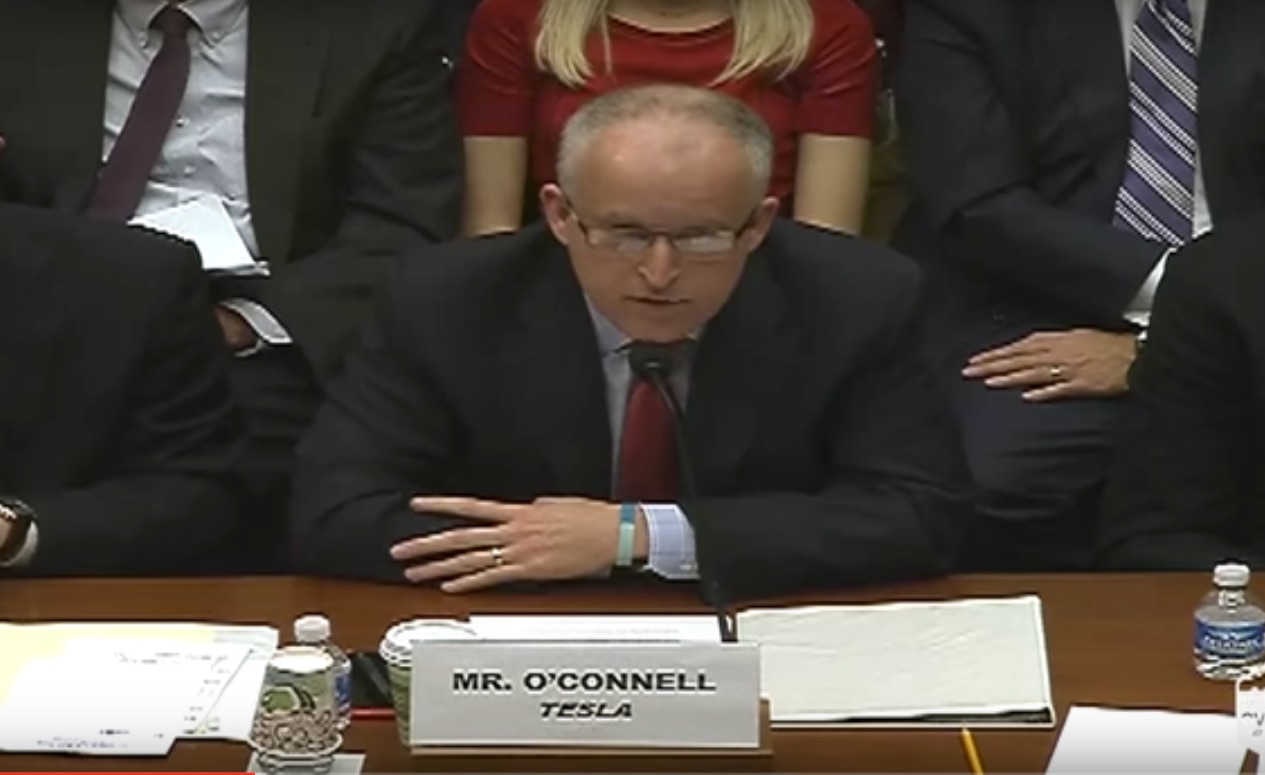 Representatives from Tesla Motors, Toyota and GM spoke on Wednesday before a Subcommittee on Information Technology about the safety, security and driving benefits of increasingly connected vehicles.

Diarmuid O’Connell, Vice President of Business Development for Tesla Motors told the committee members, “Tesla believes that in order to maintain the pace of reducing injury and fatality rates, vehicles will need to increasingly use computerized vehicle systems to avoid crashes, with particular opportunity afforded in the fully connected vehicle space.”

In a prepared statement submitted to the House Oversight Committee, O’Connell laid out four principles Tesla thinks are vital to limiting unauthorized intrusion into the digital systems that will define “The Internet Of Cars”.

As summarized on EVannex, first, O’Connell encourages all manufacturers to use “signing,” a standard cryptography technology that ensures any software updates are authorized by the manufacturer, something Tesla already does.

Second, O’Connell urged provisions that would make it impossible to connect directly to a vehicle over the internet, as happened in a widely publicized cyber attack on a Jeep earlier this year. Once again, O’Connell said Tesla does this by following industry standards for filtering, firewalling, and designs that do not required direct incoming connections.

Third, O’Connell testified that is it vital to isolate networked systems from the mechanical systems of the vehicle. He said that some manufacturers do this with technology called a “gateway,” however Tesla employs a physically separate gateway processor in order to provide added safety.

Lastly, he recommends that all manufacturers use industry standard encrypted communications protocols for connections from the vehicle.

Tesla has been highly proactive in working with experts outside the company to verify and maintain the security of its onboard digital systems. “Tesla is seeing increased vehicle security interest and scrutiny from academic and industry security researchers. Tesla encourages and applauds this assistance — to the extent of even providing financial rewards for the best research. Tesla encourages other manufacturers to do the same, because we are all safer when we work together on vehicle safety and security.”

Of course, every legislative committee thinks its proper role is to promulgate new laws and regulations. O’Connell urged the legislators to use restraint when seeking to regulate this new technology. “One possible impediment to advanced technologies, and the safety benefits of connected vehicles, is of course overly restrictive regulation. Regulation at a time of rapid innovation runs the risk of limiting the realization of the full extent of safety advances.”

While it is important for Tesla to be a leader in digital security, it is also important that other stakeholders are constantly vigilant as well. News about such things as the hacked Jeep Grand Cherokee undermine the public’s faith in the integrity of digitally connected cars. For the technology to succeed in the marketplace, it is vital that consumer confidence in the vehicles made by all manufacturers be kept at the highest possible level.