Tesla developers are known to have a little fun when it comes to planting hidden items into a vehicle’s firmware, otherwise known as an “easter egg”. Whether it’s being able to transform your Tesla into the James Bond 007 Lotus submarine or take a psychedelic cowbell road while using Autopilot, it’s always exciting to be able to uncover an unlisted feature that’s presumed to have been there all along.

A new discovery we made while using Tesla’s official mobile app reveals that Elon Musk’s other company – the one that launches things into space, SpaceX – may have been having a little fun with its own hidden “easter egg”. It’s first worth noting that Tesla’s mobile app provides Model S and Model X owners the ability to remotely control the vehicle’s climate settings, Summon the vehicle, and perform a variety of other features related to the vehicle. One such feature is the ability to view your vehicle’s location by map. Given that we were using the app at Tesla’s Design Center which also happens to be next door to SpaceX, we noticed a rather interesting pattern on the roof of SpaceX’s headquarters. Zooming in on the map we could see a vast array of solar panels on the rooftop that forms the outline to the letter “X”. That’s right. A SpaceX easter egg in the form of X-shaped solar panels. 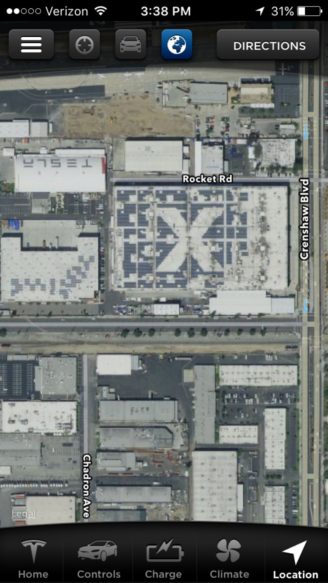 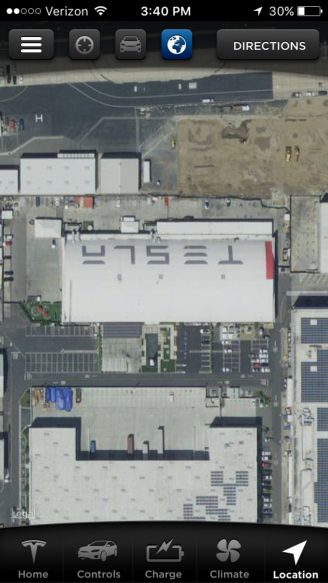 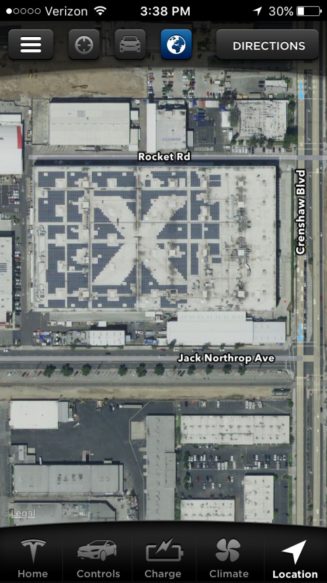 We tried to confirm the discovery through an aerial view of SpaceX using Google Earth and Google Maps however neither revealed the X-shaped solar panels, though it’s more likely because the maps haven’t been updated. Non-Tesla owners that do not have a login to Tesla’s official app can view the SpaceX easter egg using the map through our very own app (iOS | Android). Zoom to the ‘Los Angeles Supercharger’ and view the map with ‘Filter’ set to ‘Hybrid’.

We sent a quick note to some friends at SpaceX with our discovery and they were able to confirm that the company did in fact decorate the roof with solar panels in the form of a X a couple of years back. The combined solar output is said to be at least 1 megawatt of power using a SolarCity system.

Way to keep it all in the family, Musk. Tesla next to SpaceX using SolarCity solar panels. Bravo!