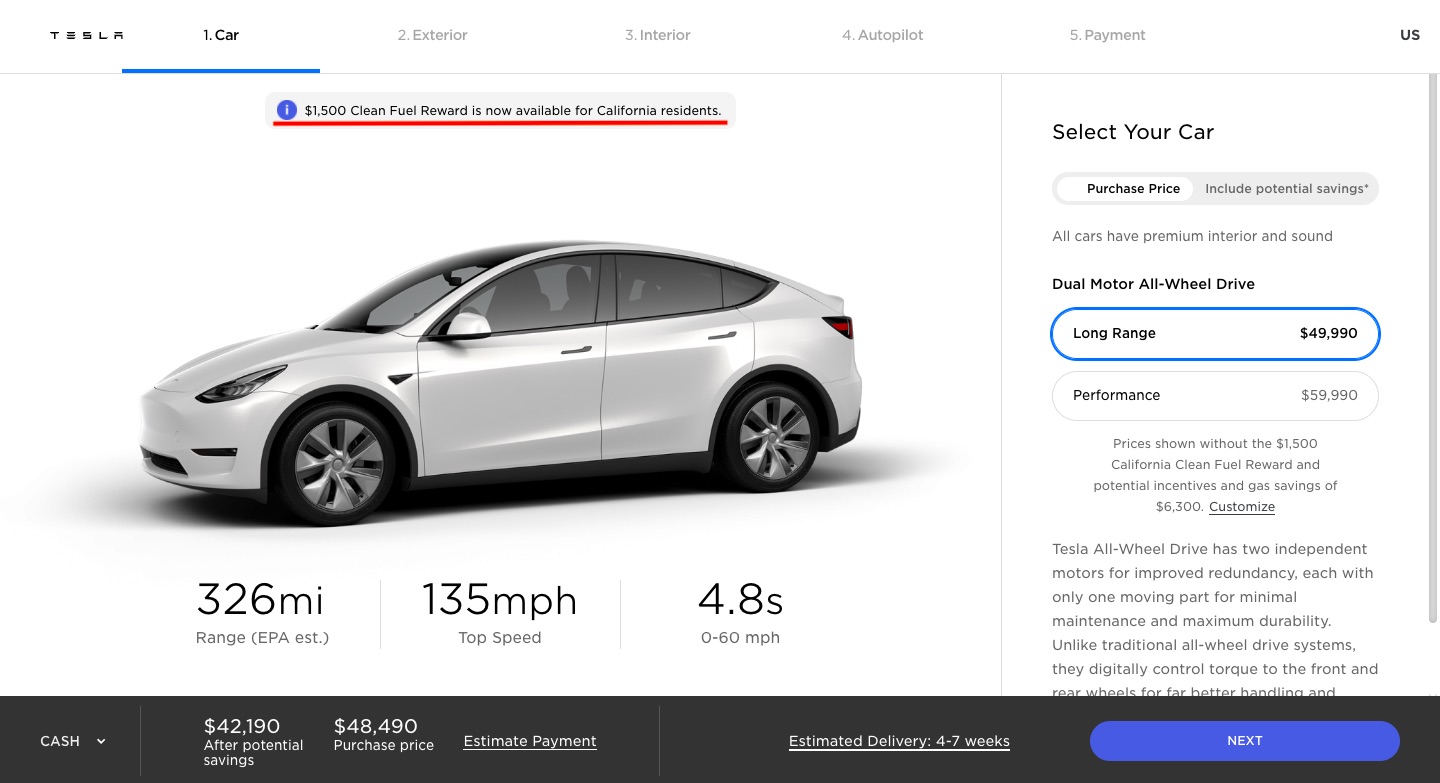 Teslas just became even more attractive to California-based car buyers. As could be seen in Tesla’s online configurator for the Model S, Model 3, Model X, and Model Y, every vehicle order now comes with a $1,500 “Clean Fuel Reward,” making the company’s lineup of EVs more affordable for consumers.

The new incentive for Tesla’s electric cars was observed by members of the EV community, with Reddit user u/lakeric posting about the update on the r/TeslaModel3 subreddit. A look at the online configurators for Tesla’s other vehicles shows that the $1,500 Clean Fuel Reward is also applicable for Model S, Model X, and Model Y orders.

The California Clean Fuel Reward is made possible by a collaboration between the California Air Resources Board (CARB) and electric utility providers. Under the terms of the incentive, the price cut will be implemented on eligible new battery-electric and plug-in hybrid vehicles. Buyers who opt to buy or lease new vehicles are eligible to claim the reward. No income or location restrictions within California come with the incentive, though the vehicle that is purchased or leased must be registered in the State of California.

“The California Air Resources Board and your electric utility want to make it easier to own an EV. That’s why we’re providing the California Clean Fuel Reward to people who purchase or lease an eligible* new Battery Electric (BEV) or Plug-in Hybrid (PHEV) vehicle at participating automotive retailers. This is on top of any applicable federal, state, and local incentives, rebates, and tax credits,” the CARB wrote.

What is rather interesting about the Clean Fuel Reward is that it could be added on top of any applicable federal, state, and local incentives, rebates, and tax credits. The incentive is also offered on a sliding scale depending on a purchased or leased vehicle’s battery size, measured in kWh. Vehicles with battery capacities of 16 kWh or higher qualify for the maximum $1,500 reward.

Tesla’s Model S, Model 3, Model X, and Model Y, thanks to their large batteries, qualify for the maximum $1,500 reward. It should also be noted that the Clean Fuel Reward will not be replacing the California Clean Vehicle Rebate Program (CVRP), which continues to be available for eligible consumers and businesses. As noted on the incentive’s official website, the California Clean Fuel Reward could be combined with the CVRP rebates.

More guidelines about the California Clean Fuel Reward could be viewed below.