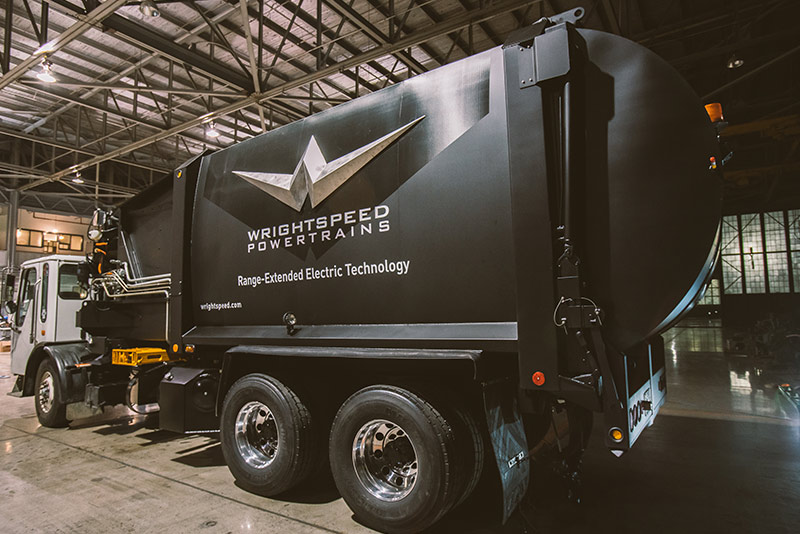 The global transition from combustion engine to all-electric vehicle continues to move into new sectors as Wrightspeed has just released its first fleet of range-extended electric refuse trucks. The powertrain represents a new era in vehicle propulsion, repowering a generation of lighter, quieter, and more efficient vehicle fleets for urban streets.

Wrightspeed’s commercial application of the range-extended, turbine-electric powertrain is the heavy-duty Class 8 Freightliner, which will be delivered to The Ratto Group, a Sonoma County solid waste collection and recycling business. The Class 8 Freightliner is the first of at least fifteen electric vehicles that will be integrated into the trash company’s fleet over the next year, according to Tim Dummer, Wrightspeed’s chief business officer. Dummer, an engineering and commercialization executive, was brought into Wrightspeed in October, 2016 as part of the company’s ramp-up of its Range-extended Electric Vehicle (REV) powertrain systems.

Called The Route™, Wrightspeed’s REV powertrain is optimized for the refuse industry and can be customized to fit a variety of today’s heavy-duty truck platforms, replacing both the engine and the transmission. Much of the growing demand for the award-winning The Route is due to Wrightspeed’s founder, Ian Wright, one of the original co-founders of Tesla Motors. After his departure from Tesla Motors in 2003, Wright had a vision that electric vehicles could deliver high-performance without compromising intrinsic efficiency. Using turbines and applying electric vehicle principles to urban, heavy-duty trucks, The Route powertrain was the result.

The Wrightspeed system can power a 66,000-pound GVW truck, delivering up to 24 miles on battery power before the range extender kicks in. After that, range is nearly unlimited as long as there is fuel for the turbine. With fuel efficiency the equivalent of up to 7 mpg in combined electricity-liquid fuel operation, the powertrain can slash annual fuel consumption by 70 percent or more compared with the average diesel refuse truck. CEO Lou Ratto says he expects a fuel savings of at least 50 percent.

Eventually, all of Ratto’s 130 residential trash and recycling trucks may be retrofitted with the turbine-electric powertrain. This is an ambitious undertaking, as a refuse truck’s demanding duty cycle drains an electric powertrain’s batteries quickly.  Think start, then stop.  Start, stop. Wrightspeed’s electric powertrain drives more low-end torque to the wheels than conventional diesel engines, with less fuel, emissions, and noise.

Wrightspeed, in a sense, is recycling Ratto’s trash collection trucks. The Wrightspeed/ Ratto contract is thought to be in the range of $3 million to $5 million.

A new refuse truck that meets all California air quality standards costs more than $500,000, so Wrightspeed’s retrofit of Ratto’s existing trucks makes the system more cost-effective, Van Amburg relates. Sonoma County officials like the trash fleet electrification program because they see it as a means of improving local air quality, says Efren Carrillo, chairman of the Sonoma County Board of Supervisors. Ratto concurs. “Here in Sonoma County there is a lot of environmental consciousness, and we are always looking for ways to be cleaner, environmentally friendly, and help the bottom line. And the idea that [by electrifying the trucks] we can do this and get off the air quality rollercoaster and stop battling to meet California emissions requirements— that makes it all worthwhile.”

ALSO SEE: The Tesla Semi will shake the trucking industry to its roots

Wrightspeed featured its powertrain technology alongside Mack Trucks at Waste Expo 2016 in Las Vegas and signed a $30+ million agreement with NZ Bus, symbolizing multinational and multimodal demand for Wrightspeed’s powertrain technology. In June, the company was named a Technology Pioneer by the World Economic Forum (WEF), and CEO Wright was an invited presenter to the International Business Council of the World Economic Forum. He will be a keynote speaker at the upcoming SAE 2016 Range Extenders for Electric Vehicles Symposium in Knoxville, 2-3 November, 2016.