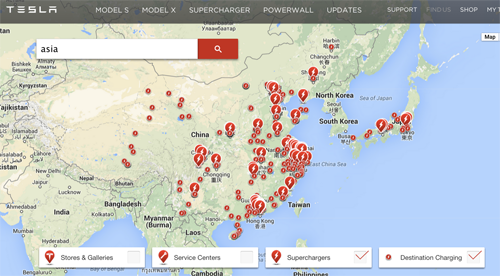 Another big week is on deck for Tesla, the automaker and energy company release its first quarter 2015 earnings this week and that could include updates on China developments. Coming into 2015, the automaker’s woes in China were very apparent, with the firing of Veronica Wu and other PR personnel. 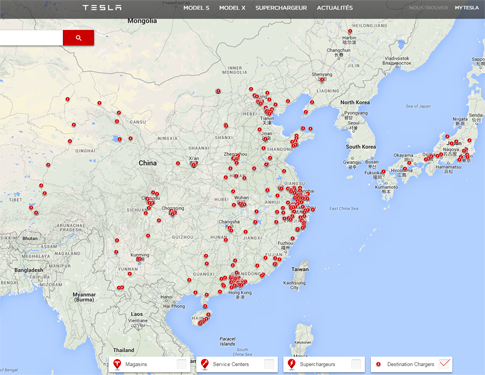 The conventional wisdom for the firings centered around the lack of a singular message about Tesla charging infrastructure in the mainland. In a short matter of time, Tesla is changing that perception as a look at a recent charging map shows an impressive number of destination chargers in Asia, above top. The picture, above, depicts just destination chargers.

Tesla has recently emphasized destination charging for Europe for the 2nd quarter of 2015, but now we know they were quite busy in Asia and China in the 1st quarter. Capital expenditures may be at an all-time high this quarter as the company tries to regain momentum in Asia.

However, the lack of charging narrative is still out there via a “hard-hitting” Forbes post about how ONE customer that sold his Model S due to the lack of charging infrastructure at his complex (home). The guy is a “sorta of a big deal” and his name is Fan Xiabo, an advertising entrepreneur in China.

According to Forbes, the building management at his home said no to a home charger and he eventually sold the Model S for a third of what it’s worth.

I’m thinking he might have looked into that tiny detail before buying a $118,000 car in China. As content marketing entrepreneur, myself, I looked into the charging issue before I made my Model S purchase. Maybe Forbes can do a story on me.

Tesla has many substantial challenges in China. According to the Tesla forum, many upper-end car owners are chauffeured during the week and desire luxury treatment in the back seat. The first edition of Model S cars didn’t have executive rear seats, now that’s been an option since December 2014.

So will Musk and company be able to change the electric car charging narrative for China? See the map below that includes superchargers and destination chargers, you decide?