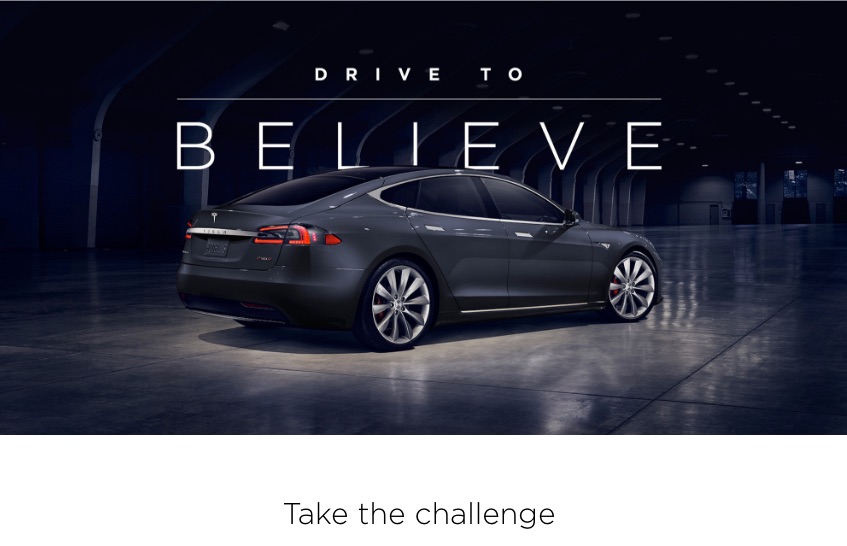 A new program being offered by Tesla invites residents in select European markets to participate in the company’s latest ‘Drive To Believe’ challenge and win a chance to experience Model S through an extended one week test drive.

Residents of the UK, Germany, Netherlands, Norway, Sweden, Switzerland, France, Austria, Belgium, Finland, Luxembourg, Italy, Denmark, and Ireland that win the challenge will have the opportunity to swap their existing vehicles for a Tesla Model S on specific dates between November 16 and December 31, 2016.

“At Tesla, we believe that it takes driving a Tesla and experiencing its superior performance, safety, and technology, to be convinced. We now want to give you that opportunity as well.”, reads the description on Tesla’s ‘Drive to Believe’ online form.

It’s no secret that Tesla is making a significant investment in expanding its European footprint. CEO Elon Musk recently told investors that the company has plans to expand its battery production into Europe with a second Gigafactory. The company also recently announced that it had acquired top-notch German engineering firm Grohmann Engineering to form a new division aimed at building automated assembly systems, a step towards Musk’s goal of “building the machine that builds the machine”. Continued efforts on scaling Tesla’s European infrastructure while streamlining manufacturing processes and logistics allows the company to position itself ahead of demand.

Meanwhile, programs such as the latest ‘Drive To Believe’ challenge allows the company’s sales arm to focus on driving demand overseas. Secondarily, by having prize winners sign off on terms that would allow Tesla to film their experience with a Model S, the company is able to leverage its Customer Stories program as a tool to build trust among interested buyers and further stimulate sales efforts.

3. Eligibility
3.1 The competition is only open to all residents in the following European markets: UK, Germany, Netherlands, Norway, Sweden, Switzerland, France, Austria, Belgium, Finland, Luxembourg, Italy, Denmark, Ireland
3.2 Entrants must be 25 years of age or above and own a car and hold a valid driver’s license for the market they reside in and enter the competition from.
3.3 Entrants must be able to provide proof of identity.
3.4 Entrants must be willing to be filmed and for all footage and image and voice recordings of their person to be used for Tesla promotional purposes, in all media, globally, in perpetuity for no additional fee or financial remuneration of any kind.
3.5 Any person that is any of the following is not eligible to win the competition:
(a) an employee of Tesla or its holding or subsidiary companies;
(b) an employee of agents or suppliers of Tesla or its holding or subsidiary companies, who are professionally connected with the competition or its administration; or
(c) a member of the immediate families or households of (a) and (b) above.
Tesla reserves the right to disqualify any person that it knows is, or has reasonable grounds to believe is, ineligible for the competition as a result of this condition.
3.6 In entering the competition, you confirm that you are eligible to do so and eligible to claim the prize. Tesla may require you to provide proof that you are eligible to enter the competition.
3.7 Tesla will not accept competition entries that are:
(a) automatically generated by computer;
(b) completed by third parties;
(c) illegible, have been altered, reconstructed, forged or tampered with;
(d) incomplete.
3.8 There is a limit of one entry per person for the duration of the competition. In the event that Tesla discovers or has reasonable grounds to believe that the same person has made multiple entries, such person and any entries made by them shall be disqualified and, if such entrant has already been selected as a prize-winner, an alternative prize-winner will be selected in accordance with condition 2.14
3.9 Tesla reserves all rights to disqualify you if your conduct is contrary to the spirit or intention of the competition or if you engage in political slogans or homophobic language, behaviour of a lewd or explicitly sexual nature or engage in content which is defamatory, obscene, illegal, vulgar, offensive or otherwise unsuitable or infringes others’ rights (including intellectual property rights).

4 The prize
4.1 The prize is as following:
(a) Competition winners must swap their current car for a Tesla Model S for the duration of one week to take place on specific dates Tesla will select between 00:01 on 16th November to 23:59 on 31 December 2016.
4.2 The prize is supplied by Tesla.
4.3 There is no cash alternative for the prize. The prize is not negotiable or transferable.
4.4 In order to claim the prize you must comply with condition 6.

6. Claiming the prize
6.1 If you are the winner of the prize, you will have 2 days from the Announcement Date to claim the prize. If you do not claim the prize within this timeframe, your claim will become invalid.
6.2 The prize may not be claimed by a third party on your behalf.
6.3 Tesla will make all reasonable efforts to contact the winner. If the winner cannot be contacted or is not available, or has not claimed their prize within 2 days of contact, Tesla reserves the right to offer the prize to the next eligible entrant selected from the correct entries that were received.
6.4 Tesla does not accept any responsibility if you are not able to take up the prize.
6.5 No prize will be awarded where any entrant has committed any form of misconduct (as determined by Tesla in its sole discretion).

7. Limitation of liability
Insofar as is permitted by law, Tesla, its agents or distributors will not in any circumstances be responsible or liable to compensate the winner or accept any liability for any loss, damage, disappointment, personal injury or death occurring as a result of any entrant entering this competition, taking up the prize, or as a result of any entrant winning or not winning any prize, except where it is caused by the negligence of Tesla, its agents or distributors or that of their employees. Your statutory rights are not affected.

8. Ownership and intellectual property rights
8.1 You agree that Tesla (and any third party authorised by Tesla) may use your person, voice and image for any promotional purpose (for example, placing it on the Tesla webpage and social channels for advertising media. You give Tesla (and any third party authorised by Tesla) your irrevocable permission to use, reproduce, publish, display, transmit, copy, amend, store, sell and sub-license your person, voice and image worldwide and in perpetuity for promotional purposes and for the purposes of the competition. Tesla will own the right to your image and voice recordings captured during the duration of the competition.
8.2 By submitting your competition entry, you agree to:
(a) assign to Tesla all your voice and image rights with full title guarantee; and
(b) waive all moral rights,
8.3 You agree that Tesla may, but is not required to, make your personal image and voice recordings available on our social media channels and websites and any other media, whether now known or invented in the future, and in connection with any publicity of the competition. You agree to grant Tesla a non-exclusive, worldwide, irrevocable license, for the full period of any intellectual property rights in your image and voice recordings, to use, display, publish, transmit, copy, edit, alter, store, re-format for such purposes.