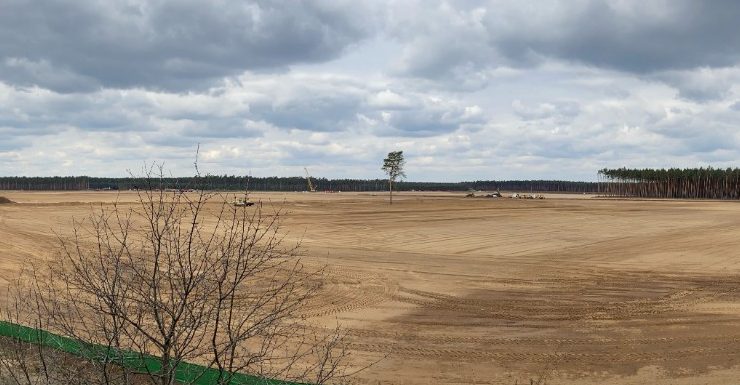 Tesla’s Giga Berlin factory is officially ready for groundbreaking as the final tree was removed from the parcel of land earlier today.

Local Tesla enthusiast behind Twitter account @gigafactory_4 shared an image of the newly cleared land at the German site, noting “The last tree at #gigaberlin is history.”

The electric vehicle manufacturer has been preparing the 90-hectares of land for several months. In February 2020, the company began removing the low-quality trees that were planted within the property to ready the land for leveling and excavation. The trees will be replaced in areas surrounding Tesla’s purchased land by three-fold.

The final tree remained standing on the property as bats inhabited it as a place of hibernation. Tesla made a point to protect any wildlife on the site and promised not to interfere with the homes of animals on the site. Tesla’s removal of trees needed to be completed by the start of March as the bird-breeding season began during the third month of the year. Tesla completed this phase of the project, leaving this single tree standing for the bats.

According to Weather.com, Grünheide, the city where the land is located, warmer weather has arrived. These weather conditions could mean the conclusion of bat hibernation as temperatures are consistently around 60 degrees Fahrenheit. Bats are known for hibernating in temperatures that are below this mark, but not by much. However, when temperatures begin to rise and the Spring season arrives, bats end their hibernation and start stocking up on food for the summer months.

The removal of the final tree means the bats have likely vacated the property, which would allow crews to remove it from the site and officially conclude the deforestation process for the first portion of land that will house the Giga Berlin production facility.

Construction crews completed ground leveling and excavation in early April as Tesla is planning to begin construction on the facility within the near future. Tesla has applied for permission to begin the construction as soon as possible.

The groundbreaking ceremony was scheduled for the final portion of March, and Tesla CEO Elon Musk confirmed his attendance. However, travel restrictions because of the COVID-19 pandemic would have left Musk stranded in Germany, as U.S. President Donald Trump banned any travel from a majority of European countries to the United States.

As of now, Tesla’s Giga Berlin will begin producing vehicles, starting with the Model Y, in July 2021. On April 14, Musk gave an update about the facility’s paint shop, stating it would be the best in the world. Tesla plans to upgrade its other paint shops within both Fremont and Shanghai, too, but Berlin’s will be the model for its other production plants.