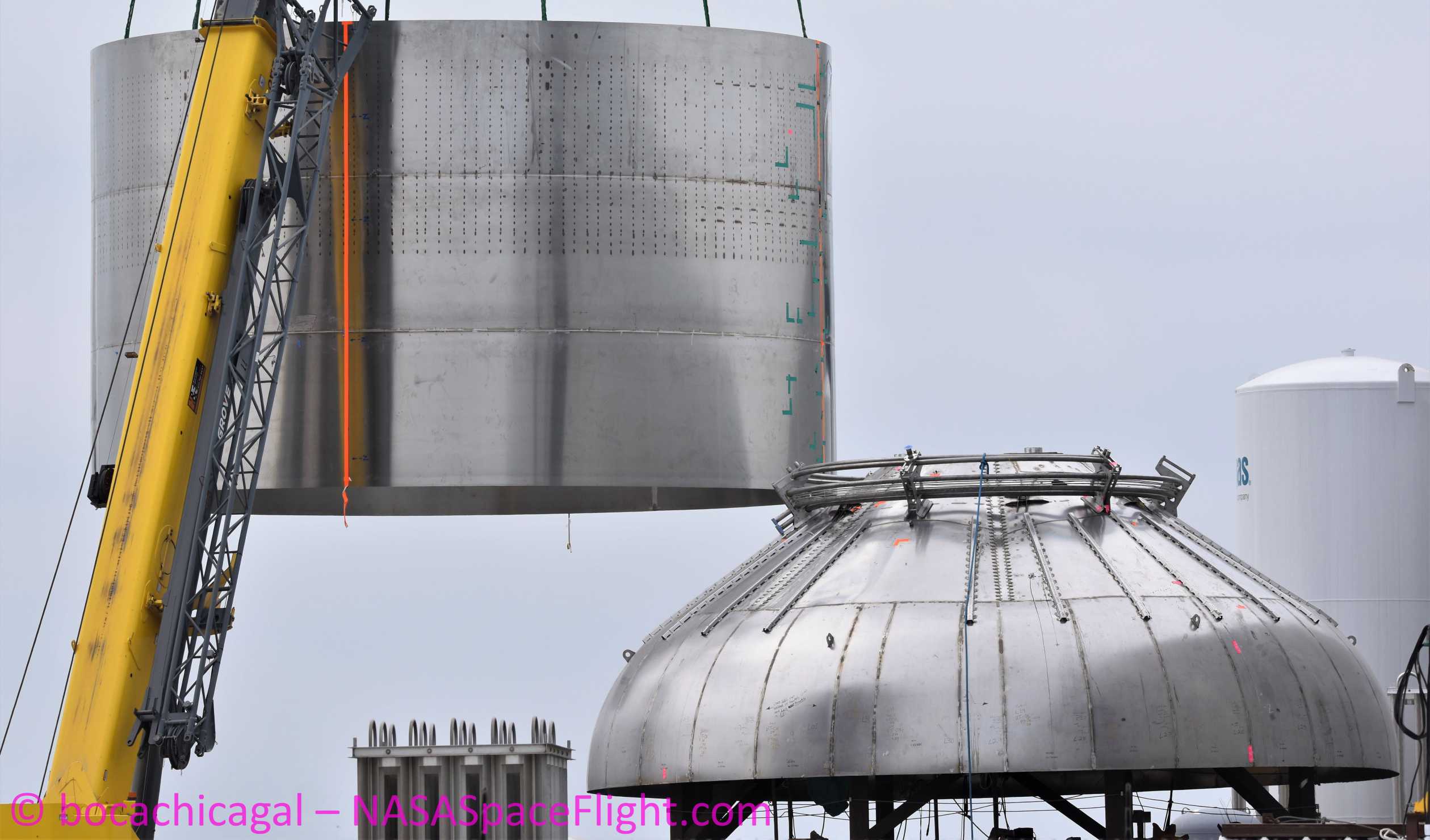 Pictured here on April 10th, Starship SN4's engine section is about to cap off the ship's business end, setting it up for testing later this month. (NASASpaceflight - bocachicagal)

SpaceX appears to have entered the final stages of assembly of its fourth full-scale Starship prototype with a fifth ship already close on its heels, suggesting that the South Texas rocket factory may be close to achieving CEO Elon Musk’s lofty production goals just weeks after he set them.

Known as SN4, short for the fourth serial production vehicle, SpaceX continues to build full-scale rocket prototypes – following Starship SN1, SN2, and SN3 – in a matter of weeks. While both SN1 and SN3 were destroyed during their first major tests on February 29th and April 3rd, the almost unbelievable speed of SpaceX’s Starship production suggests that each prototype is being built for pennies on the dollar compared to any traditional aerospace effort.

That speed also means that any single failure should cause no more than a few weeks of delays, assuming the failure mode can be quickly identified and rectified. Along those lines, at the same time as Starship SN4 is likely no more than a day or two away from its final stacking milestone, numerous large parts for the next prototype – Starship SN5 – have also been spotted in the late stages of fabrication. This is great news for the next few weeks of Starship development.

In simple terms, the appearance of multiple partially-completed Starship SN5 parts suggests that even if Starship SN4 soon follows in the footsteps of its predecessors and fails in the early stages of testing, another ship should be ready to take its place just a few weeks later. This has been SpaceX’s strategy for the last several months. Less than nine days after Starship SN1 was destroyed during testing, Starship SN2 – turned into a dedicated test tank instead of a full ship – successfully passed tests confirming that the flaw that destroyed SN1 had already been fixed.

Less than three weeks after SN2’s successful test campaign, SpaceX wrapped up Starship SN3 assembly and rolled the building-sized rocket to the launch pad on March 29th, five days before it failed during its second cryogenic proof test.

At its current rate of assembly, Starship SN4 should also be ready to head to the launch pad less than three weeks after SN3 was lost during testing and should be physically complete within a matter of days. By all appearances, Starship SN5 is currently where SN4 was around the end of March, suggesting that SN5 is just two weeks behind its older sibling.

Ultimately, it appears that SpaceX – less than five prototypes into a wholly new production line – is already close to build a Starship every other week, while Musk’s near-term goal is to complete one every week by the end of 2020. At the same time, Starship SN4 is likely just a handful of days away from being transported to the launch pad for its first test campaign.