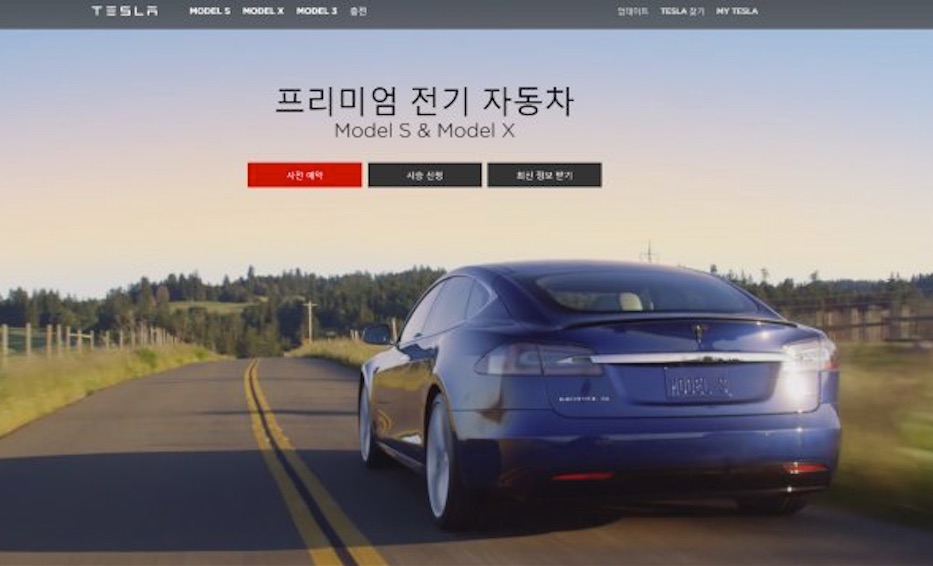 Tesla has officially opened up its online reservation process in Korea to interested buyers of the Model S, Model X, and Model 3. This marks the official entry of Tesla into the Korean market after it was reported late last year that the company filed incorporation papers with the government of Korea to establish an office in the Gangnam district south of Seoul.

Tesla CTO JB Straubel once told conference goers in Seoul that the company sees great potential in the Korean market but was unsure when sales would begin within the country. “I can’t give a specific answer about when we will exactly start selling vehicles in Korea but this is a market that we are committed to and we think there is great potential here,” he said late last year.

Now comes word via the Korea Herald that Tesla has launched a new Korean version of its website that allows buyers to place an online reservation deposit for one of the company’s fleet of electric cars. Would-be buyers of the Tesla Model S  sedan can place a 2 million won ($1,800) deposit to reserve the vehicle. Model X buyers are required to plunk down 5 million won or roughly $4,500 to reserve their spot for the unique electric crossover, and 1 million won ($900) for the Model 3.

Despite Tesla’s popularity within the country – a local poll showed that employees of Korean automakers picked Tesla over their own brand – the company is being cautious not to over expand due to the lack of charging infrastructure within the country. “We don’t want to damage the brand by growing too quickly and not having enough infrastructure, service and support for our customers,” Straubel said last year during his speech at Seoul’s Digital Forum conference.

Test rides for the Model S will be made available towards the end of the year at select Tesla stores. The company plans on showcasing the Model X in early 2017.