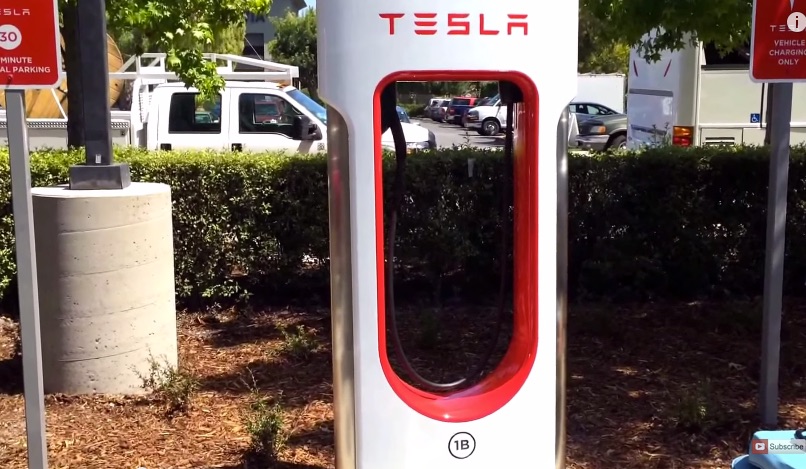 Liquid cooled charging cables are thinner and more flexible than ordinary charging cables. Soon, every Tesla SuperCharger will be equipped with them.

At Tesla’s annual shareholders meeting, Elon Musk announced that liquid cooled charging cables would soon be available at all Supercharger locations. Thanks to our friend KManAuto, we have thermal imaging video of the new liquid-cooled cables in action at the Supercharger station in Mountain View, California.

Liquid-cooled charging cables have several advantages. First, they are thinner and more flexible, which makes them easier to use, especially in cold conditions. Second, they give Tesla the ability to increase charging rates without overheating the cable.

The new liquid-cooled Superchargers are almost identical to the ones Tesla owners are accustomed to, with the exception of a row of air vents at the bottom. According to comments on the company’s forum, the cooling substance inside the cable is propylene glycol, an antifreeze commonly used in automotive applications.

KManAuto’s thermal image video shows the cable remains just slightly above ambient temperature while his car is being charged. Even the air used to cool the liquid exits the bottom of the charging station just a few degrees warmer than the surrounding air.

Charging times will become almost as important as range, performance and price for potential electric car buyers. If Tesla wants to become a mass-market manufacturer, it needs to reduce charging times as much as possible. That will help them scale with demand without having to build hundreds of new Supercharger locations.

While there is no car quite like the Model S on the market, there are plenty of car makers who plan to compete with the forthcoming Model X and Model 3. Audi’s new R8 E-Tron can go 90 miles on just 15 minutes of charging time using a high power 150 kW charger. As more and more electric cars come to market, high power chargers and shorter charging times will become critically important to high volume sales.

Elon Musk also said at the annual shareholder meeting that most Supercharger stations would be converted to solar power in the near future. He promised that those not able to be converted would soon get their electricity entirely from renewable energy sources.

As usual, Tesla is moving boldly to keep ahead of the competition even before any of them get in the game. Tesla is masterful at anticipating what the demands of the marketplace will be in the future and taking appropriate steps to meet them today. Liquid-cooled Supercharger cables and solar powered stations are two ways Tesla intends to stay far ahead of the competition.