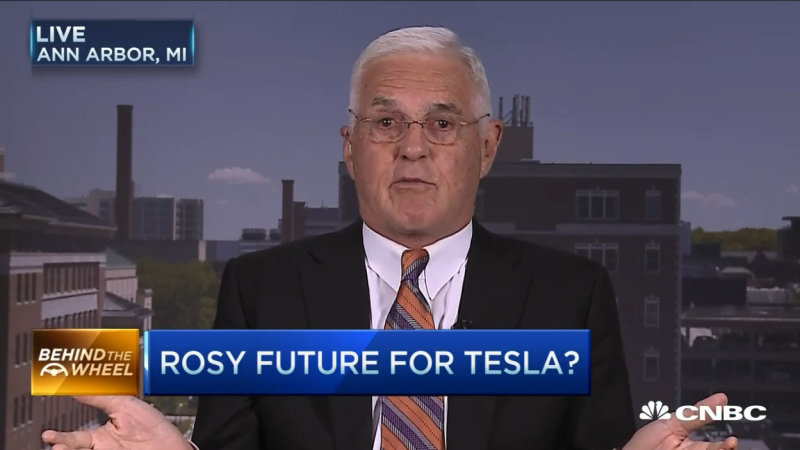 Last week on CNBC, maximum Bob Lutz took aim at Tesla Motors and, specifically, the Powerwall product offering. Lutz says, “I think [the battery] is greatly overvalued because having batteries as backup storage has been around for hundreds of years. I can’t understand the fascination with this.”

Maximum Bob is right on the mark, the Powerwall is overvalued by the media. The two home products, 10kWh (the backup battery) and the 7kWh daily cycle, will make up a small portion of the revenue mix for Tesla.

Musk even said so at the annual shareholder meeting. In response to a question about the powerwall, Musk said,“Actually it’s probably worth also elaborating on the Powerpack which we expect most of our activities to be with the Powerpack, not the Powerwall.”

“So, it’s probably 80%, maybe more than that of our total energy sales likely to be at the Powerpack level to utilities and to large industrial customers.”

However, the only problem for maximum Bob is that he keeps on speaking without mentioning the powerpack potential or he doesn’t understand it. Or maybe it’s a narrative for CNBC to milk, since Bob is a CNBC contributor. I enjoy Uncle Bob, but he’s a one-trick pony, Automotive guy.

Industrial and utilities are the big catch here and there’s no waiting for an energy market in this space. It’s here and Musk and JB Straubel are really smart, but how smart?

Musk on how the powerpack can assimilate in the utility space:

I guess that’s why Tesla didn’t go for the bulky, lead acid batteries solution that Lutz advocated on the “Squawk Box” segment. To be fair, maximum Bob was talking about a home battery solution.

Plus, there will be a healthy supply of customers in the industrial manufacturing space, too. I’ve been writing for Automation World magazine since 2008 and energy management has been a growing issue for manufacturers and those companies love plug-n-play solutions.

For example Cummins Inc., a manufacturer of truck engines, could be a candidate for the Powerpack. They just installed 7,200 solar panels and 2-megawatts of solar power at its Pennsylvania plant. Currently, Cummins sells it back to the utilities but a Powerpack solution could help them avoid large demand charges for heavy use in the afternoon, say during large production times.

Sure, Tesla Energy has to execute and utilities have to come on board. However, it’s getting there. Listen to a couple Energy Gang podcasts and you hear about utility infrastructure buildout costs, and utilities bemoaning that it will be selling less energy to retailers.

It looks like Elon has worked all this out for the utilities, first, the infrastructure and, secondly, the energy demand component. If Tesla produces 500,000 electric cars annually in, say, five or six years, then you have a big demand for energy and for the utilities. That’s a lot of juice.

Then, maybe maximum Bob will see the “fascination” with battery storage.