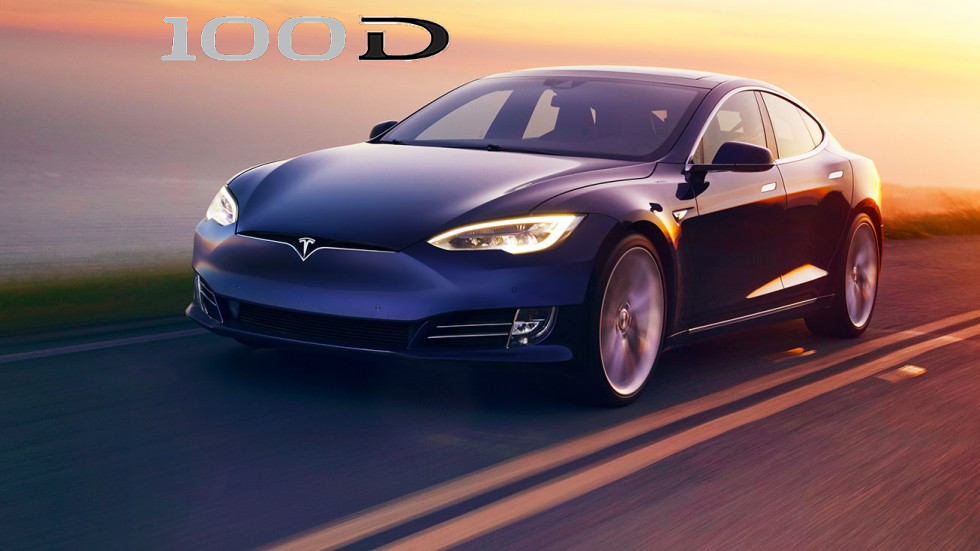 Tesla has updated the Model S and Model X online design studio to include a new 100D variant equipped with a 100 kWh battery pack. It’s the company’s longest range vehicle to date which offers 11-14% more range than the non-performance 90D.

Model S 100D vehicles will get a bump in range from the 90D’s 294 miles of range to 335 miles when equipped with the non-performance 100 kWh battery pack. Tesla’s Model X 100D will also get an increase of nearly 40 miles over the 90D variant, putting the two and a half ton electric SUV just shy of 300 miles of range. 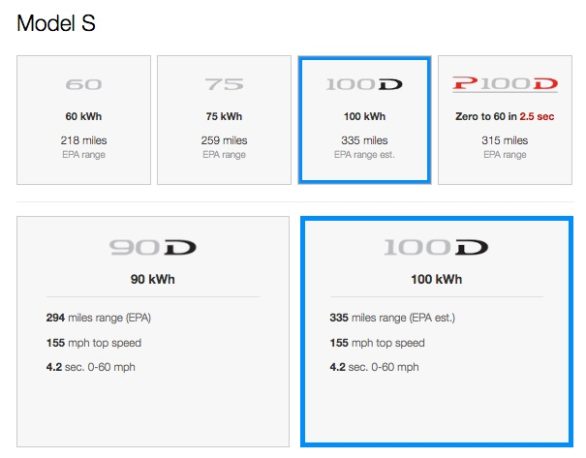 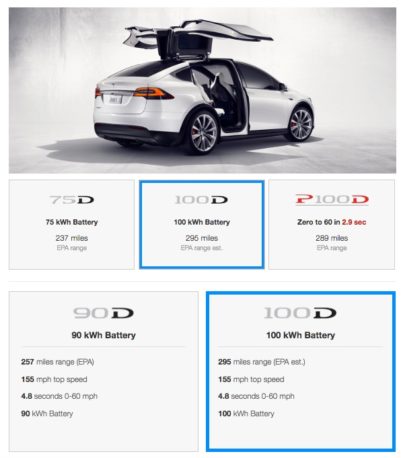 Though the increase in range on the 100D is minimal when compared to the company’s performance-based P100D with 100 kWh battery pack, the price difference is substantial. A Model S P100D starts at a base price of $137,800 and bundles in the Smart Air Suspension feature while the non-performance 100D is priced considerably less at $95,800, but does not include the Smart Air Suspension. The $42,000 price difference buys unprecedented acceleration, however the 100D offers 20 more miles of range than the P100D despite the lower price point. The same story can be told for the Model X. A Model X 100D costs $37,000 less than the P100D version and offers 6 more miles of range.

Tesla CEO Elon Musk has said in the past that the company “will probably stop” at a 100 kWh battery pack, however improvements in battery technology could result in even more driving range further down the road. Tesla has recently announced that it has begun mass production of the its newest ‘2170’ lithium-ion battery cells at the Gigafactory. The new cells have a different form factor than the current cylindrical 18650 cells being used in the Model S and Model X battery packs, but more importantly they offer a significant increase in energy density by comparison to battery cell volume. It’s the primary reason why Tesla’s latest Powerwall 2 home battery system – packed with Tesla’s new 2170 cells – boasts twice the energy over the original Powerwall, while also requiring less space.

2170 battery cell production for the Model 3 will begin in the second quarter. One can expect Tesla to eventually swap out the 18650 cells being used in the Model S and Model X with higher performing 2170 cells at some point in the future.

The once unimaginable 300-mile per single charge barrier has long been shattered. On to the next. A 400-mile Tesla isn’t that unthinkable.