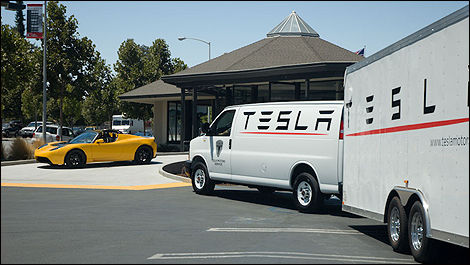 As Tesla prepares for volume production of its mass market Model 3 scheduled for later this year, the company is taking a prescriptive approach when it comes to establishing a dense service network that will support its growing fleet of vehicles.

While Tesla continues to improve vehicle quality and reduce the amount of service needed per vehicle, the company still doesn’t have the infrastructure to handle a mass production vehicle. Instead of needing to scale the number of service centers proportionately to vehicle production, Tesla will be expanding their mobile service capability which includes sending technicians to an owner’s home or office for minor repairs.

“Ahead of the Model 3 launch, we are reengineering and expanding our operations as we anticipate the needs of a much larger family of Tesla owners. In service, since more than 80% of our repairs are so minor that they can be done remotely, we are expanding our mobile repair service that allows Tesla to make vehicle repairs at an owner’s home or office.”

The announcement was made in the company’s Fourth Quarter and Full Year 2016 Update letter.

Amid growing concerns from Tesla owners citing long service delays, the Silicon Valley-based automaker also said that it has increased the number of cars serviced per day by 95% since early last year, and on track to reduce service wait times to less than one day, based on a global average.

“We continue to evolve our service function as well. In Q4, we reduced service backlog in our busiest markets by 25%, and by year end we had increased the number of cars serviced per day by 45% since Q3’16, and by 95% since Q1’16. In fact, we are on track to reduce the global average wait time for vehicle service to less than one day by the end of the first quarter of 2017.”

Tesla has offered mobile service since 2009 to support buyers of the company’s first Roadster vehicle. The company would later extend the mobile service offering to its flagship Model S sedan through an optional Tesla Ranger Service program.

According to Tesla, the majority of service repairs are minor enough that it makes sense to offer a mobile repair service that can be completed offsite and without the need of a physical service center. Musk empathized during a Q&A call with analysts that the Model 3 is designed to be a much simpler car with less parts than the Model S and Model X, thus resulting in potentially less areas that require servicing.

Additionally, Tesla’s acquisition of America’s largest solar provider, SolarCity, has given the company insight on how to handle mobile service calls in the most efficient and cost effective manner. SolarCity handles all of its solar system servicing and installations using a mobile installation team.