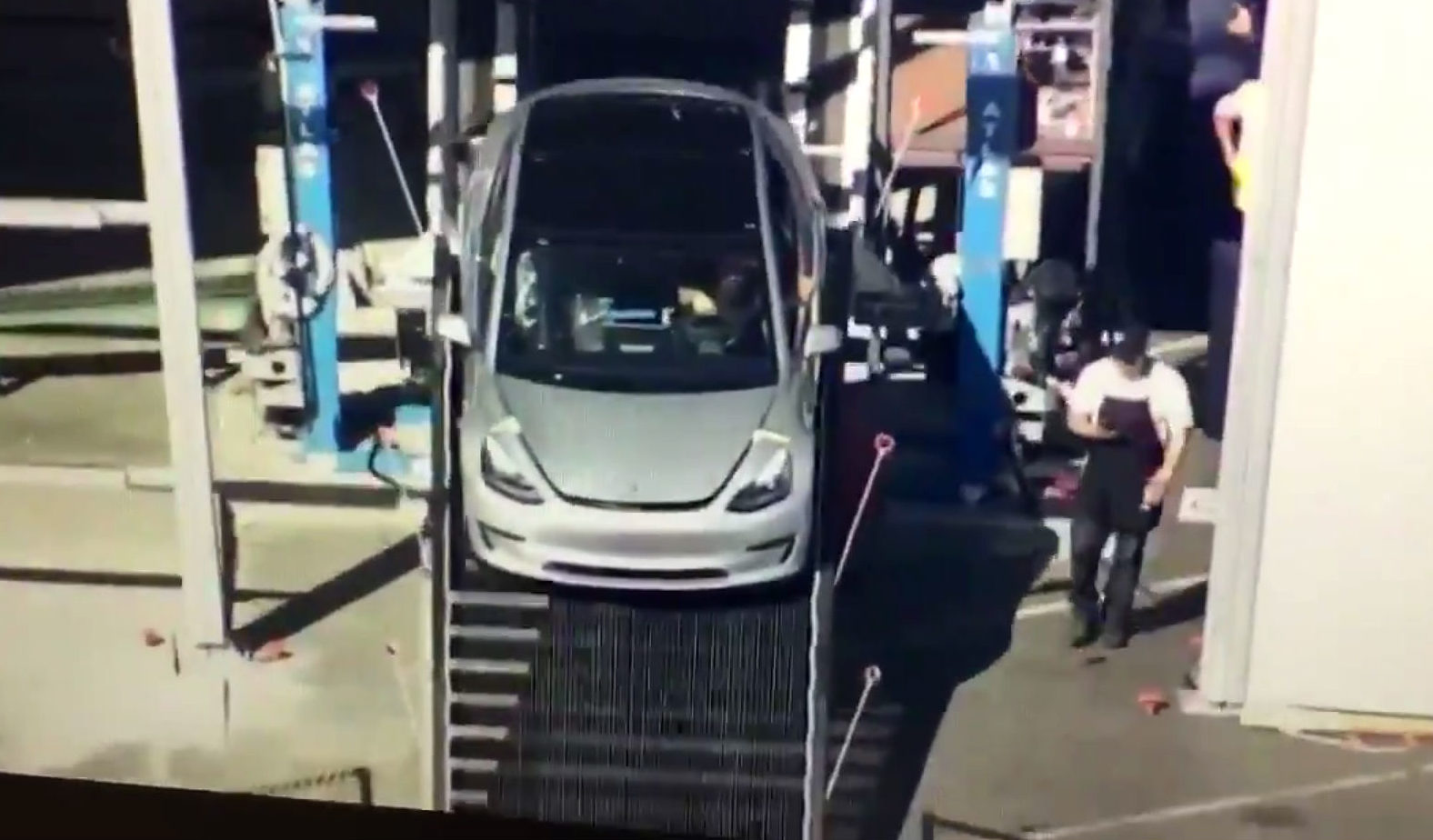 A recent flyover of Tesla’s Fremont factory has captured a rare footage of a freshly-built Model 3 rolling off GA4, the company’s newest general assembly line set up in a massive sprung structure. Located in the northeast end of Tesla’s main factory, the giant tent is currently seeing a flurry of activity as employees assemble the compact electric car.

The short clip of the flyover was shared by NBC host Raj Mathai, who noted that the overflow production line was added as a means to help Tesla achieve its self-imposed goal of producing 5,000 Model 3 per week by the end of the second quarter. Elon Musk, who has expressed enthusiasm about the sprung structure, responded to the video, stating that GA4 is working and that it has a “slightly higher quality” than more traditional assembly lines.

The future of #Tesla hinges on this gigantic tent. Overflow production line added in back lot of @tesla HQ. @elonmusk wants to pump out 5K #TeslaModel3 per week. @Teslarati pic.twitter.com/KhPtPHerzB

The flyover video revealed a number of interesting new scenes, the most notable of which is a freshly assembled silver Model 3 being driven off the end of GA4. Cars that are being constructed, as well as rows of finished vehicles, were also featured in NBC‘s brief clip.

Tesla’s sprung structure is massive, spanning the size of two football fields. Considering its unorthodox nature, GA4 has attracted its own fair share of critics, such as financial analyst Max Warburton from Sanford C. Bernstein & Co., who dubbed the assembly line as “insanity.” In a statement to KTVU News, however, Dr. Fred Barez, director of San Jose State’s Electric Vehicle Technology, stated that Telsa’s giant tent is actually not that unusual, since it’s being used throughout the world, especially in the field of aviation.

“It is not unusual because he understands the problems that he’s facing. He comes up with outside the box solutions. It is definitely in the right direction because this tent facility is going to double the capacity. It’s going to at least improve that capacity,” Dr. Barez said.

As the end of June approaches, Tesla stock (NASDAQ:TSLA) has become a battleground between bulls and short-sellers, with Goldman Sachs analyst David Tamberrino stating that Tesla would likely only deliver 22,000 units of the Model 3 during the second quarter, despite production likely to hit 5,000 vehicles per week in the final week of Q2 2018. It should be noted, however, that earlier this year, Tamberrino also issued a report stating that Tesla would only manufacture 1,500 Model 3 per week for the second quarter, making his current bearish expectations slightly optimistic by his own standards.

Pierre Ferragu of New Street Research, however, has a more optimistic outlook. In a recent statement to The Street, the Tesla bull noted that Tesla is still on track to profitability on Q3 or Q4 2018, regardless of whether the company achieves its Model 3 production targets this second quarter or not.

“You should not look at how many cars are produced. Instead, you should look at how much money each vehicle is bringing in, and as Tesla ramps production their free cash flow will improve dramatically. The long-term, five- to seven-year trajectory is the real story of Tesla,” Ferragu said.

Tesla stock continues to hold its position in the market, with shares of the electric car maker standing its ground after a steep 6% plunge last week. As of Wednesday’s intraday, Tesla stock is trading up 1.37% at $346.70 per share.