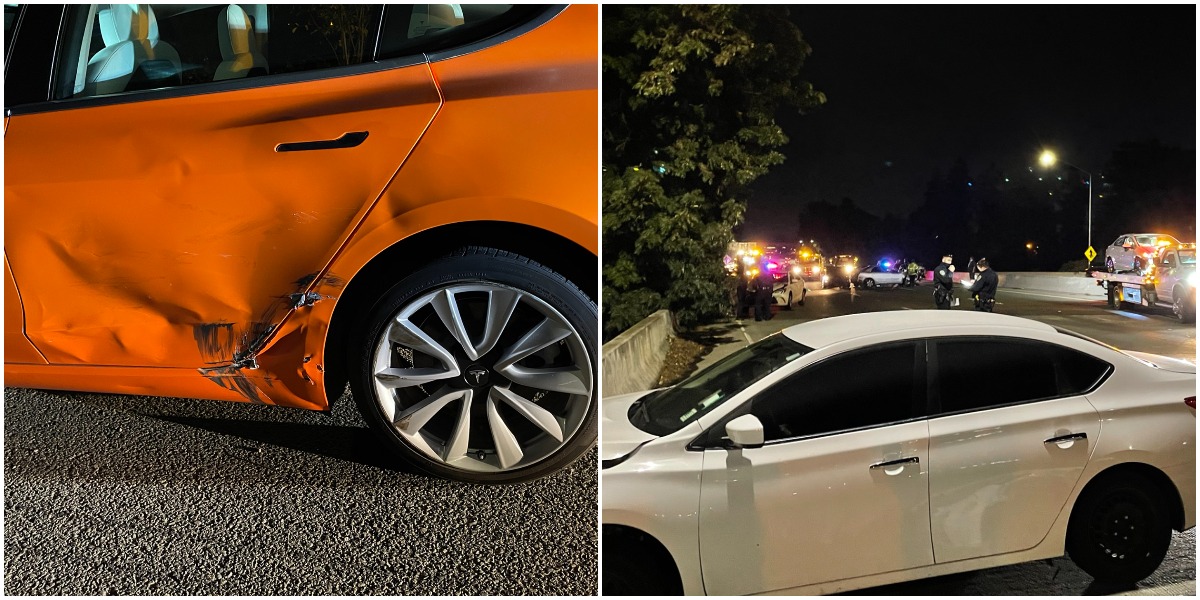 A Tesla Model 3 owner is thanking his vehicle’s Autopilot system for saving his vehicle from fishtailing out of control after contact with a distracted driver.

During a nighttime drive on California Highway 880, a Model 3 owner who wished to be referred to as Rorlover, was minding his own business and using Tesla’s Autopilot functionality to travel. Suddenly, a Nissan sedan quickly approached the all-electric vehicle from the rear, shifted lanes, and appeared to attempt a “pit maneuver.” The contact sent the Nissan spinning into the left-hand retaining wall, while the Model 3 maintained control and safely slowed down and came to a halt on the shoulder of the road.

“I do credit the Tesla Autopilot for keeping the car heading straight after being hit,” Rorlover said to Teslarati. “I was really quite impressed.” 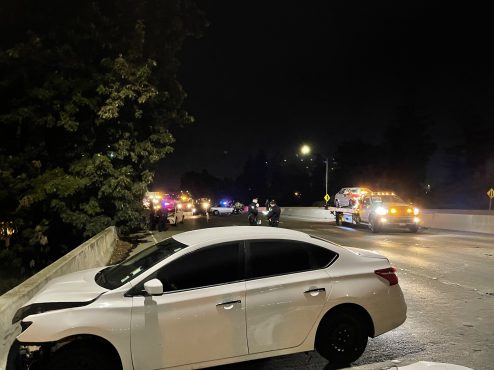 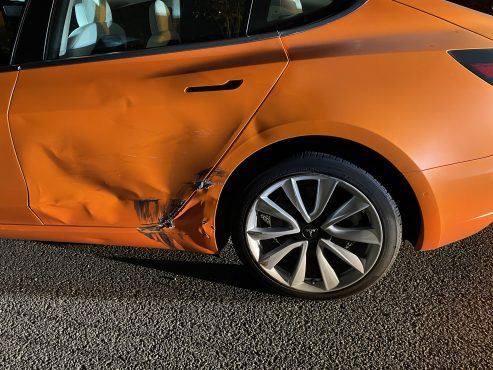 Rorlover initially posted the incident on a Subreddit, and although the incident appeared to be on purpose, Rorlover says the driver was actually distracted and accidentally made contact with his Tesla.

“The police report confirms there was nothing but a young and distracted driver. No road rage or attempted murder—hopefully, they’ve learned their lesson.”

The impact caused significant damage to the rear passenger door on the driver’s side of the Model 3, but it was by far the more fortunate vehicle in the event. The Nissan collided head-on with a jersey wall, sending debris all over the highway and ultimately lead to a six-vehicle pile-up that shut down the side of the highway the two cars were traveling on.

Rorlover walked away from the incident unharmed. The driver of the Nissan was taken to the hospital after a brief interview with Police, but the nature of their injuries is unknown.

The Model 3’s weight, which is supported by a large battery pack that gives the vehicle a low center of gravity, may have assisted in the car’s ability to maintain control. However, Rorlover’s description of the accident implies that Autopilot deserves more of the credit than the car’s weight distribution. Rorlover shared an exclusive video of the accident with Teslarati and stated that the impressive nature of Autopilot’s handling could be recognized from the Dashcam perspective of the vehicle.

“I didn’t share it initially as it’s not that exciting, unless you know it’s Autopilot doing the steering,” he said.

Tesla has made significant strides in its development of self-driving characteristics this year. In addition to releasing a more broad Autopilot functionality earlier this year that included driving on City Streets and Automatic Traffic Light Navigation, Tesla also rolled out its Full Self-Driving Beta in October. The release has revealed Tesla’s complex self-driving software, and CEO Elon Musk expects a Level 5 Autonomy version to be released next year.

The Model 3 already holds a Top Safety Pick+ recommendation from the Insurance Institute of Highway Safety (IIHS) and also achieved the lowest probability of injury of any vehicle ever tested by the National Highway Transportation Safety Administration (NHTSA). With its focus on semi-autonomous driving features, the inclusion of basic Autopilot with any Tesla car hints toward an even more robust safety system. After Autopilot prevented the Model 3 from fishtailing and colliding with a jersey wall, perhaps the system could contribute to even higher safety ratings in future tests.