The EPA released its Certification Summary Information Report of Tesla’s Model 3, and it contains some new information on battery specifications and horsepower rating for the premium electric sedan.

According to the EPA filing, the long range Model 3 that’s capable of 310 miles per single charge uses a battery pack rated at 350 volts with a capacity of 230Ah. Multiplying the two figures together and we can see that Model 3 uses an 80.5 kWh battery pack.

Also seen in the EPA document via InsideEVs is a reference to Model 3’s 258 rated horsepower. It’s important to note that the performance figure is for the first production long range Model 3 which is equipped with a single electric motor and comes standard in a rear wheel drive only configuration. According to Tesla CEO Elon Musk, the performance variant of the Model 3 in all wheel drive is expected to arrive in mid-2018. One can expect a Model 3 “P” to have well over 400 horsepower in a dual motor set up.

Probably middle of next year. Focus now is on getting out of Model 3 production hell. More versions = deeper in hell.

InsideEVs notes that “although Tesla CEO Elon Musk previously stated that the Model 3 can’t fit more than 75 kWh of battery, his reference could’ve well been to useable, not max capacity of the pack, so the numbers still fit in with his past statement.”

The EPA Certification Summary report points to an “END-SOC” or state of charge level of 78270 watt-hours or 78.2 kWh of useable battery capacity. 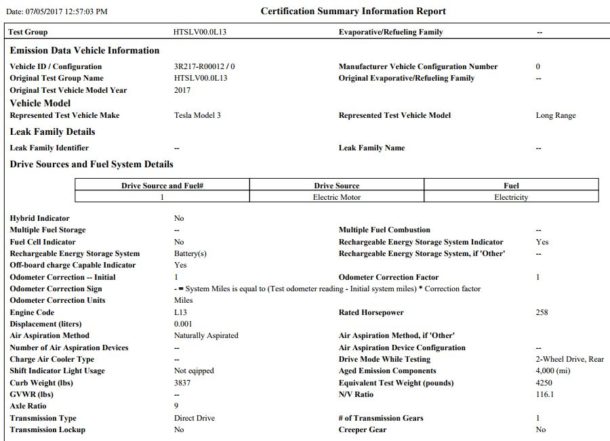 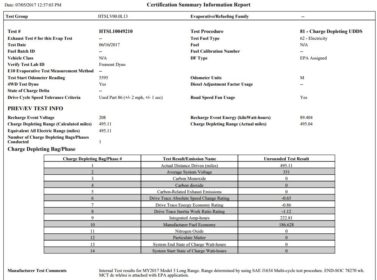 The figures reported by the EPA have not yet been confirmed by Tesla.

All in all, it looks as if the Model 3 with a 3,837 pound curb weight (1,740 kg) will be one of the most efficient vehicles in modern history. You can read the EPA document in full here.