Tesla appears to be on track to break the 300k barrier in its Model 3 VIN registrations this quarter, filing more than 74,000 vehicles on January and more than 24,000 cars this month. While these numbers are undoubtedly impressive, the recent batch of VINs registered by the company also hints at something notable — a steady demand for the Model 3 in the United States.

Based on the data gathered by Model 3 VIN registration tracking group @Model3VINs, Tesla had registered more than 44,000 vehicles this quarter for North America, comprised of both AWD and RWD units. This past Saturday alone, Tesla registered a large batch of 13,225 Model 3 VINs, and more than 95% were RWD units designated for the region, where the car has been available since it entered production in mid-2017 (Canada is the first country outside the United States that received the electric sedan). With this in mind, this recent batch of VIN filings hints at more than 12,000 RWD vehicles intended for the US and Canada.

Following the fourth quarter’s results, a TSLA bear thesis has emerged claiming that Tesla has exhausted the demand for the Model 3 in the United States. Nevertheless, the most recent registration for North American vehicles suggest that even Tesla’s most affordable Model 3 variant to date — the Mid Range RWD — continues to see some healthy demand in the region. It should also be noted that Tesla still has more than a month to register and produce more Model 3 units for the US. Overall, this all but highlights Elon Musk’s words during the Q4 2018 earnings call, when he stated that Tesla is not facing a demand problem.

“I feel very confident about Model 3 demand. The customer happiness level with the car is incredible, and I think probably the highest of any car in the world right now, I think. And so you can tell like; basically, nobody wants to sell (their) car,” Musk said. 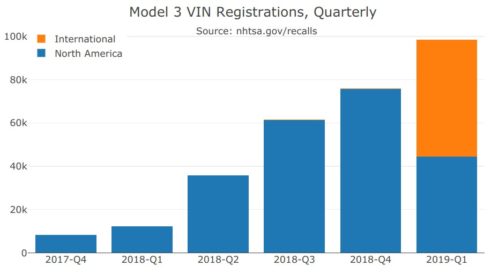 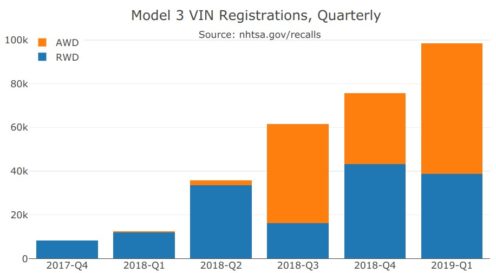 Granted, VIN filings do not directly correspond with Tesla’s actual production numbers, but the registrations themselves have been quite effective at estimating the company’s manufacturing trends every quarter, as seen in the increasing accuracy of Bloomberg‘s Model 3 VIN tracker.

While the Model 3 is already making waves in the United States (and seems poised to do the same for Europe and China), it should be noted that Tesla is not starting its attack on the lower end of the market yet. For Tesla to compete in this segment, the company would have to successfully produce the elusive base Model 3, which is priced at $35,000 before incentives and savings. So far, Tesla appears to be taking steps towards the production of the vehicle, with the Mid Range Model 3 RWD now priced at a reasonable $42,900. With this in mind, it could only be a matter of time before the company starts making its most disruptive Model 3 yet.