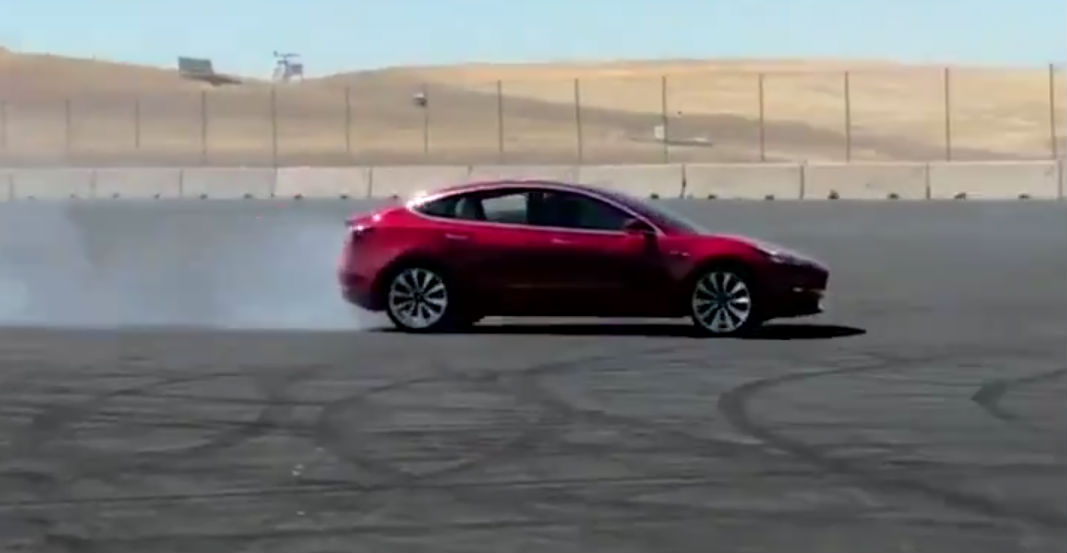 Tesla has shared a video of the Model 3 Performance during skidpad testing. The short clip, which was uploaded by the Silicon Valley carmaker on Twitter, featured the high-performance variant of the compact electric car burning rubber and drifting around what appears to be a closed area of the company’s test track.

Skidpad tests usually involve accelerating a vehicle until the outermost tires begin slipping. Once this happens, the speed of the vehicle is recorded, and a car’s handling in terms of lateral gs can be derived. Tesla did not mention the skidpad numbers of the Model 3 Performance in its recent post, but vehicles’ figures in the tests are usually correlated with the overall handling of the car. Skid pad tests can be among the most productive evaluations for high-performance vehicles and yield invaluable feedback from experienced test drivers.

The Model 3 Performance is the top-tier variant of Tesla’s mass-market compact electric car. The vehicle boasts two electric motors, a 0-60 mph time of 3.5 seconds, a top speed of 155 mph, as well as a range of 310 miles per charge. Initially announced with a price of $78,000 including all options such as white seats and premium paint except Autopilot, the vehicle’s sticker price was eventually lowered by Tesla to just $64,000 if fitted with standard seats, non-premium paint, and a top speed limited to 145 mph.

Among the options available for the vehicle is the $5,000 Performance Upgrade, which includes 20″ Performance Wheels, a Carbon Fiber Spoiler, Aluminum allow pedals, and a top speed boost to 155 mph. As we noted in a previous report, the Model 3 Performance will also feature a unique, underlined badge that reads “Dual Motor.”

Elon Musk initially announced that Tesla would probably start the production of the Model 3 Performance around July, when the company achieves a steady pace of producing 5,000 Model 3 per week. Midway through June, however, Elon Musk surprised the Tesla community by tweeting a picture of a red Model 3 Performance coming off GA4, a new assembly line set up in a sprung structure at the grounds of the Fremont factory. Musk did not state if the production of the Model 3 Performance had already started, but an image of the compact electric car’s seats that Musk later uploaded revealed that Tesla is already producing white seats for the vehicle.

If Tesla’s recently shared video is any indication, it appears that the testing for Model 3 Performance is well underway. Looking at the way the car moves in the short clip, it definitely seems like the vehicle could live up to Musk’s bold statement that the compact electric car would feature better handling than vehicles like the BMW M3 on the track.