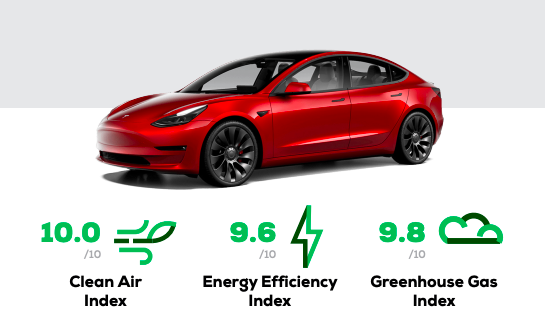 The Tesla Model 3 scored a five-star Green NCAP rating, Tesla announced on Monday. The top-selling electric vehicle was awarded five stars with a Weighted Overall Index of 9.8 out of 10 by Green NCAP, which promotes the development of clean vehicles that are energy efficient and cause as little harm to the environment as possible.

Tesla noted that its vehicles are “designed to be more than just a great electric vehicle, but the best vehicles, period. Their efficiency are simply a positive by-product of making the absolute best and most fun products possible.”

The company added that its process of continuous iteration introduced running changes to its vehicles to improve thermal comfort, efficiency, range, and more.

“In fact, 1 kWh of energy allows you to drive 7 kilometers in Model 3, compared to only 2 kilometers in an equivalent ICE vehicle. This efficiency leads to customer savings. Tesla’s online Calculator for European customers shows that a German Tesla owner spends as little as 0.08 € per kilometer on a Model 3 versus 0.12 € on an equivalent ICE vehicle—that’s 35% savings per kilometer,” Tesla noted.

Although Tesla scored 9.8 out of 10 on the greenhouse gas emissions tests, Tesla noted that its 2021 Impact Report analyzed the lifecycle emissions of its vehicles and compared them with equivalent internal combustion engine vehicles in the U.S., Europe, and China, and the Model 3 produced fewer greenhouse gases.

Green NCAP shared details of its Greenhouse Gas index, which is based on a Well-to-Wheel+ approach. The greenhouse gas emissions related to the supply of energy are added to those of the tailpipe.

“The vehicle’s production is not yet included in the assessment due to the implicit limitations of generic data about global supply chains. Since the Model 3 is a purely electric car, its assessed GHG emissions originate only from the upstream processes of electricity supply – ca. 45-80 gCO2-eq./km. Thanks to its low energy consumption and the relatively low GHG of EU electricity production, the Tesla scores a very high 9.8/10,” the organization said.