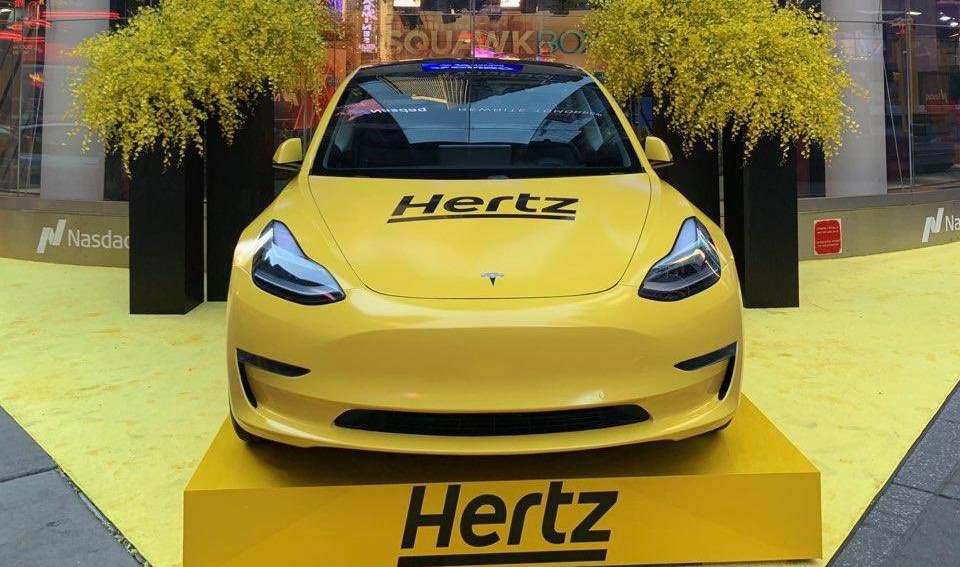 As it started trading on Tuesday on the Nasdaq, car rental giant Hertz brought over some of its Tesla Model 3 units to the Nasdaq MarketSite in Times Square, New York. The initiative was a show of force of sorts, showing that the car rental company is going full throttle in its efforts to embrace sustainable transportation.

Among the vehicles brought by Hertz were several white Model 3s and at least one that is wrapped in the company’s colors. And while the company also brought over some of its luxury SUVs to Times Square, it was the Model 3 that evidently took the center stage. This was somewhat symbolic for Hertz, which has made headlines recently with its blockbuster 100,000-unit Tesla order.

Hertz seems to be keen on emphasizing the idea that it is all-in on electric vehicles. Since announcing its intention to purchase 100,000 Teslas from the American electric car maker, Hertz has gone ahead and featured the Model 3 in several of its advertisements. This was despite Tesla CEO Elon Musk noting on Twitter that the Hertz deal involves no fleet discounts for the car rental company.

In a recent appearance at CNBC’s Squawk Box, Hertz Board Member Tom Wagner highlighted that there is no doubt that demand far outstrips Tesla’s supply. He also noted that Hertz has been seeing some interest for electric vehicles among its customers. “There’s no question demand exceeds supply at Tesla, there’s enormous built up demand from us, from consumers in general … It’s really about working to ensure we bring vehicles into the fleet in timeline consistent with what all parties want,” Wagner said.

While Hertz may have no binding contract for its massive 100,000 Tesla purchase, the EV maker did benefit from news of the car rental giant’s order. The massive vehicle order helped Tesla stock strengthen its momentum, which ultimately pushed Tesla well into a valuation of over $1 trillion. Hertz also seems to be looking at a long-term relationship with Tesla. The company noted that its order could increase to about 150,000 (or even more) vehicles if the electric cars prove popular enough among its customers.