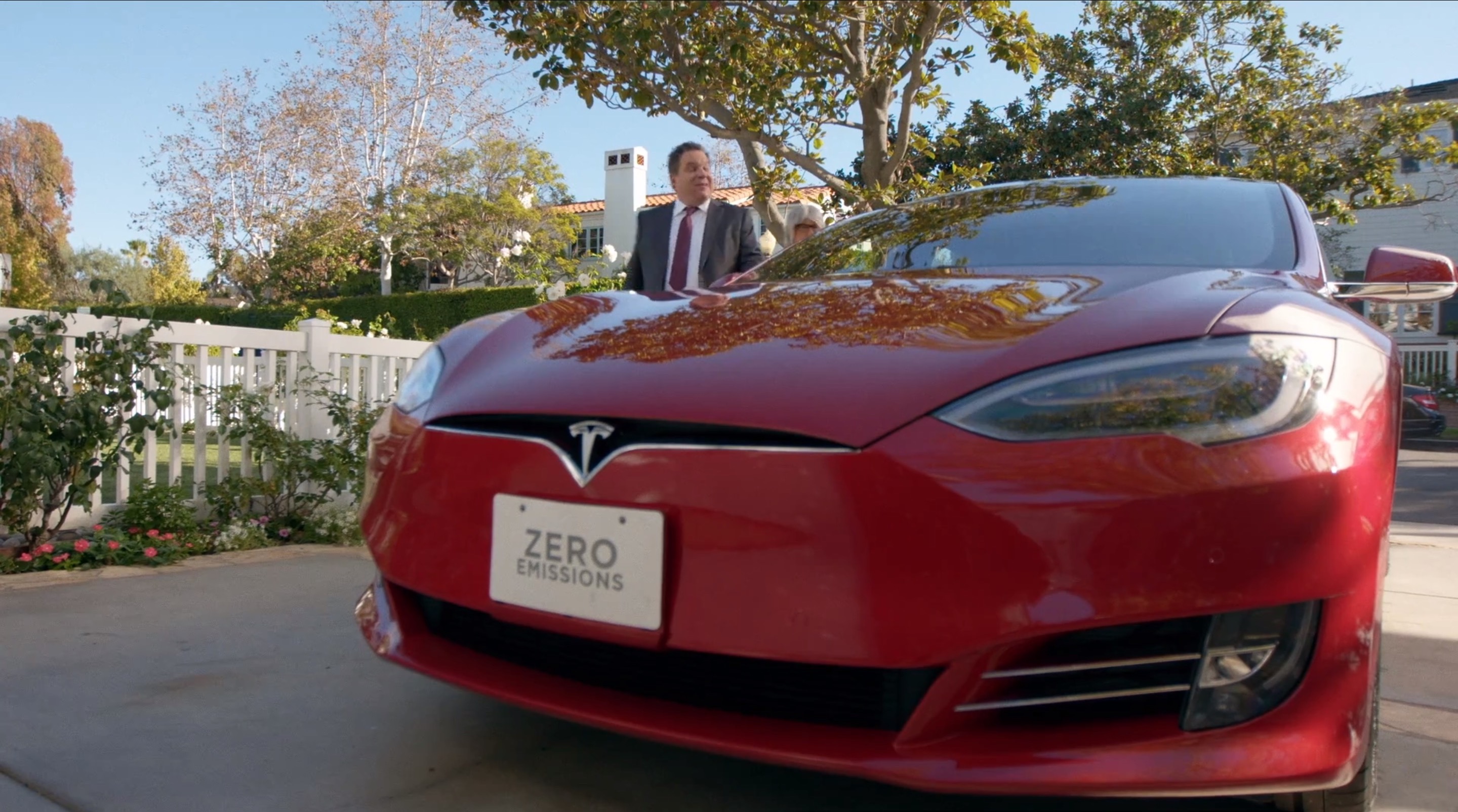 The Tesla Model S had a big TV appearance on the popular HBO comedy series, Curb Your Enthusiasm. Throughout the new season of Curb Your Enthusiasm, Seinfeld’s co-creator Larry David who plays a version of himself in the show has been tooling around in a new BMW i3, rather than his usual Toyota Prius. However, the Tesla Model S became a  centerpiece in Larry’s escapades thus begging the question, was this advertisement by Tesla in the form of a product placement?

When walking up to Jeff Garlin’s (Jeff Greene in the show) house, Larry sees a shiny red new Tesla Model S in the driveway.

David: “Wow look at this thing”

While Larry and the Garlin’s were about to split up to look for a missing child, Larry asks Ted Danson, “Hey do me a favor, Can I look for the kid in your Tesla? I’d like to drive it.” It wasn’t clear why Larry wanted to take it for a test drive, but an interesting incident happened while he was out searching.

Without giving away too many details of the episode, David runs into a cop at a stoplight. When the light turns green, the cop car doesn’t move so Larry attempts to give the cop a short ‘beep’ on the horn. Needless to say, Larry accidentally hits a horn a bit too hard and angers the cop. The cop gives Larry a ticket, not believing Larry’s excuse that he isn’t used to the “subtleties” of the new car’s horn. Later that day, Larry runs into Ted Danson and explains the situation. In typical Larry David fashion, he blames the issue on the Tesla’s horn.

David: “By the way, that car of yours (Danson’s Tesla) got me to get a ticket.”

David: “I was at a stoplight, and I beeped a cop.”

Danson: “What does that have to do with my car?”

David: “Your horn could not hit the subtle notes required in the arts of beeping.”

David: “A beep is not a beep. I’m telling you that horn is going to get you in a lot of trouble.” While the episode didn’t really focus on the Tesla, it played a key part throughout the episode. Towards the end of the episode, Danson is put in a similar situation as David attempts to give the car in front of him a short beep.

Driver from the car in front: “That was an aggressive f**king beep.”

Danson: “It’s a new car and I’m not used to the subtleties of the beeps.”

While the exchange is clearly the usual Curb Your Enthusiasm humor, it begs the question: Is the Tesla’s horn too loud? Kidding aside, it’s unclear whether this was a product placement between HBO and Tesla. One could argue that the deliberate camera angles used in capturing the vehicle and the lack of actual license plates could signal that this may have been a product placement.