A recent sighting of a white Model S equipped with LIDAR hardware suggests that Tesla’s next generation Autopilot 2.0 could be coming with advanced self-driving capabilities and additional safety measures. The Tesla seen in the photo is mounted with a laser detection system capable of generating complex 3D maps of its surroundings in real-time and allow a vehicle to accurately detect distance to objects. The roof-mounted hardware is perhaps best known as being the clunky device used on Google’s self-driving test vehicle, often seen cruising through the streets of Silicon Valley.

This latest sighting took place near Tesla’s headquarters in Palo Alto, CA on the very same day the company announced the tragic accident that took the life Model S owner Joshua Brown. Early Tesla adopter and notable community member Tesla Owner captured the photo of a white Model S with overhead LIDAR and adorned with a Stanford branded license plate bracket and rear windshield. Doubting that Stanford University would use a near $100k Model S for the purpose of student projects, Tesla Owner followed the vehicle until it turned directly into Tesla headquarters.

“My suspicions were confirmed that this was a Tesla corporate vehicle when I saw it enter the back parking lot of Tesla headquarters!” Tesla CEO Elon Musk has previously suggested that the use of LIDAR technology is not needed for autonomous driving. “I don’t think you need LIDAR … you can do this all with passive optical and then with maybe one forward radar”, Musk said during a press conference last October. “I think that completely solves it without the use of LIDAR. I’m not a big fan of LIDAR, I don’t think it makes sense in this context.”

Despite Musk’s stated case against LIDAR, industry experts believe self-driving cars will require multiple detection systems including the use of infrared LIDAR technology if vehicles are to remain safe at high speeds. In the case of Brown’s fatal accident which saw his Autopilot enabled Model S crash into a white tractor trailer against a brightly lit sky, the vehicle’s cameras were not able to differentiate between the high ride-height of the trailer from an overhead freeway sign. The light sensing radar with lasers of the LIDAR system would have been able to address such use case.

We know other Teslas has been previously spotted testing presumably Autopilot 2.0 as seen in our sighting of a classic Model S retrofitted with new fascia and an array of sensors including dual cameras. 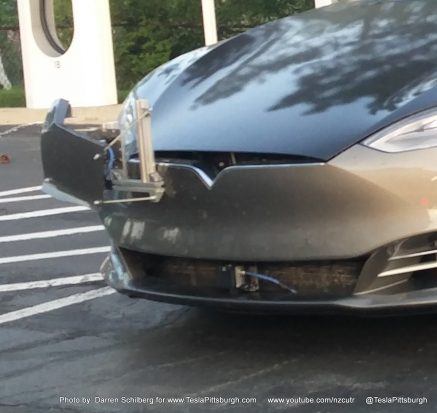 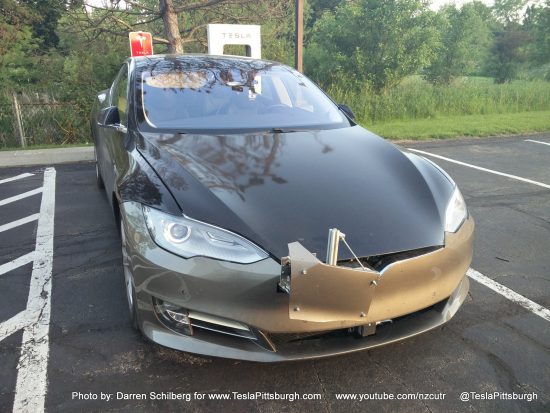 Though Tesla has not officially confirmed with us that the recent test mule sightings are in fact a result of the company testing its next-generation Autopilot, the use of a LIDAR along with its suite of sensors including cameras, ultrasound and radar would suggest that we’re in for something good. Really good. Hashtag Model 3.