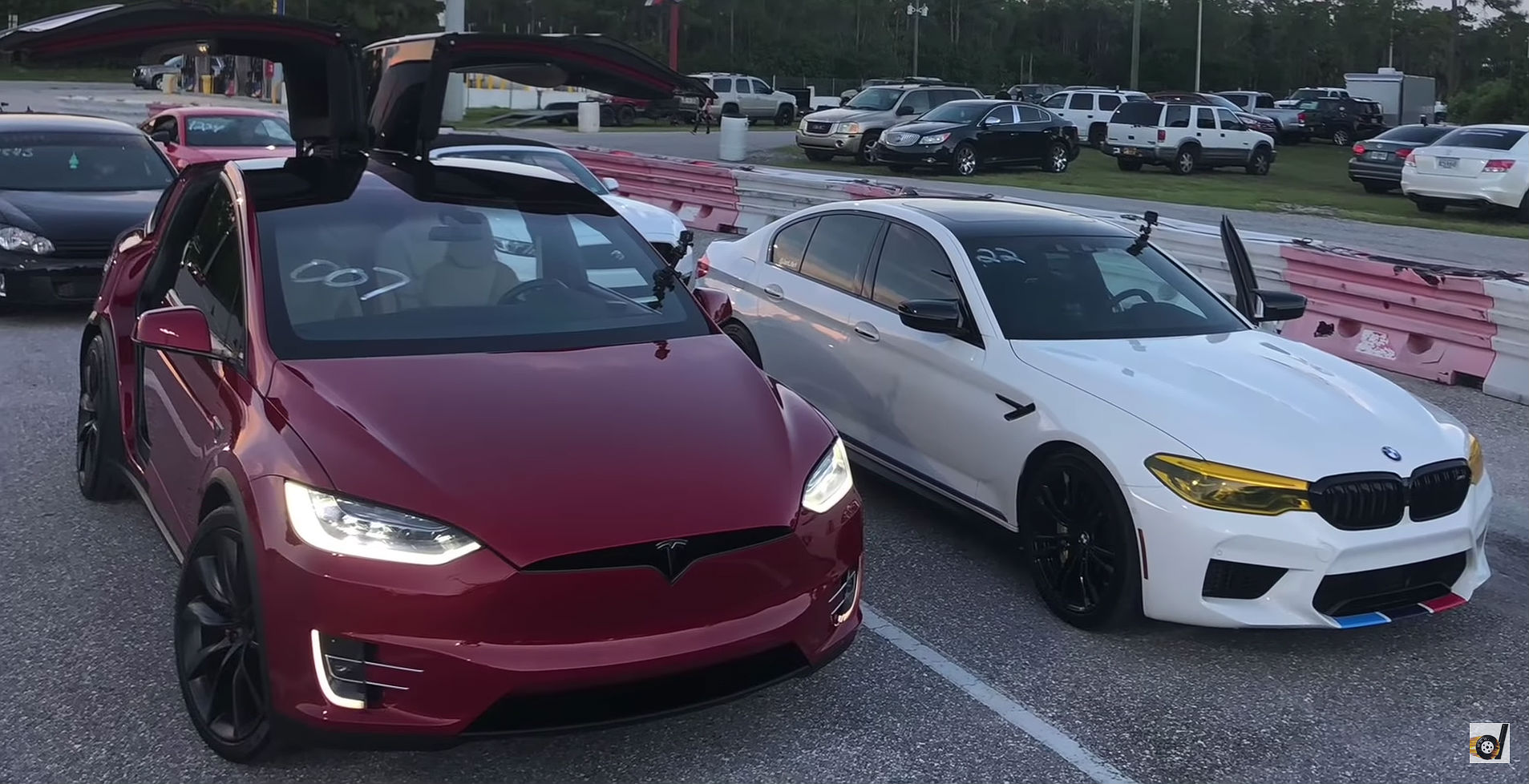 There are very few gas-powered sedans that are capable of standing toe-to-toe against the Tesla Model S P100D and the Model X P100D. Over the years, Tesla’s P100D twins have established themselves as formidable forces on the drag strip, with a long line of supercar victims under their belt. That said, when faced with Germany’s monster of a sedan — the 2018 BMW M5 — could the Model S P100D and Model X P100D still maintain their place as drag racing royalty?

Such a race was recently featured in YouTube’s DragTimes channel. The 2018 BMW M5 is pretty much the Model S’ gas-powered equivalent in the way that it is large, fast, and incredibly powerful. The M5 is equipped with a 4.4-liter V8 Twin Turbo engine that generates an impressive 617 hp and 553 ft-lb of torque. The car could be bought in either RWD or AWD configurations, though the vehicle in DragTimes‘ recent video was the all-wheel-drive version. The BMW M5 is pretty beefy at 4,370 lbs, but it is still quick, capable of going from 0-60 mph in 3.2 seconds. The M5 is listed with a top speed of 155 mph, but with the optional M Driver’s Package, the vehicle’s top speed gets raised to 189 mph.

In contrast, the Tesla Model S P100D is fitted with all-electric dual motors that produce 588 hp to its wheels and 920 lb-ft of instant torque. The electric car is AWD as well, and is quite hefty at 4,900 lbs. Thanks to the instant torque from its two all-electric motors, the Model S P100D is capable of sprinting from 0-60 mph in ~2.3 seconds with Ludicrous Mode, though its top speed is software limited to 155 mph. The Tesla Model X P100D, on the other hand, might be an incredibly heavy vehicle at 5,700 lbs, but it is still quick off the line. Thanks to its twin electric motors that produce 588 hp and 920 lb-ft of instant torque to its wheels, the Model X P100D is able to hit the 60 mph mark in 2.9 seconds.

The 2018 BMW is actually a very well-balanced car, but as shown in DragTimes‘ video, the vehicle fell just a little bit short in its attempts at taking down the P100D twins. It ran one race with the Model X P100D, where it finished the quarter mile in 11.35 seconds while traveling at 123.53 mph. Unfortunately for the M5, the Model X P100D was slightly quicker, crossing the quarter-mile mark in 11.33 seconds at 116.84 mph.

The 2018 BMW M5 competed against the Model S P100D twice, and on the first run, the gas-powered sedan actually managed to get a jump on the all-electric supercar killer. That said, it didn’t take long before the Model S’ instant torque allowed it to catch up to the M5 and maintain a slight lead until the end of the race. The first bout between the Model S P100D and the 2018 M5 was close overall, ending with the Tesla completing the race in 11.06 seconds at 118.86 mph and the BMW finishing the run in 11.27 seconds at 123.77 mph. The Model S P100D dominated the second race, crossing the quarter-mile mark in 10.98 seconds at 119.08 mph compared to the BMW M5’s 11.46 seconds at 120.94 mph.

The P100D twins are still Tesla’s quickest vehicles when it comes to straight-line races. That said, the Model 3 Performance, the latest iteration of the company’s midsize electric sedan, is looking to be formidable in an area where the Model S and X are still lacking — the track. The Model 3 Performance is even set to receive a dedicated Track Mode, an option that Elon Musk describes as an “Expert User Mode” for the vehicle.