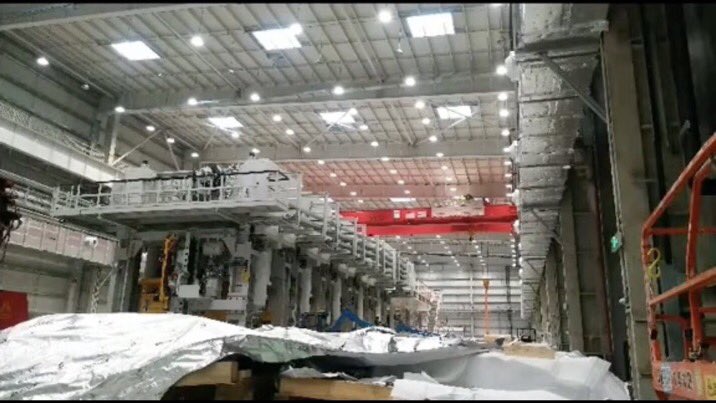 Recent images from Tesla’s Gigafactory Shanghai complex suggest that the installation of the Made in China Model Y stamping press is nearing completion. The photos bode well for the progress of the Shanghai based factory, as it suggests that trial production runs of the Model Y could indeed begin sooner than expected, perhaps as early as the end of this year.

The pictures from Giga Shanghai feature a massive stamping press that looks all but completely set up. One end of the massive machine also included a banner that read “上海特斯拉冲压生产线上梁大吉,” which roughly translates to “Good fortune for finishing the installation of Giga Shanghai stamping line.”

This would be quite an interesting setup, seeing as the Model 3 factory and the Model Y factory appear to be linked through their stamping areas. Recent drone flyovers have shown that this may be the case, since a “sky bridge” now seems to be visible between the Phase 1 and Phase 2A buildings. The presence of this structure opens a lot of speculations about Tesla’s production plans for China.

It should be noted that while the Model 3 and the Model Y share about 75% of their components, the two vehicles are manufactured quite differently. An extensive teardown of an early production Model 3 and Model Y from noted auto veteran Sandy Munro proved this, with the analysis showing that the all-electric crossover has far more manufacturing efficiencies than its sedan sibling.

With the installation of the Model Y factory’s stamping press in mind, as well as the presence of a sky bridge between the two production facilities in the Giga Shanghai complex, it appears that Tesla is now only months away from starting trial production runs of the Model Y for the Chinese market. But this time around, the refinement of the vehicle’s manufacturing process will likely be smoother, especially since that the Model 3 and Model Y facilities are seemingly being designed to share some of their operations.