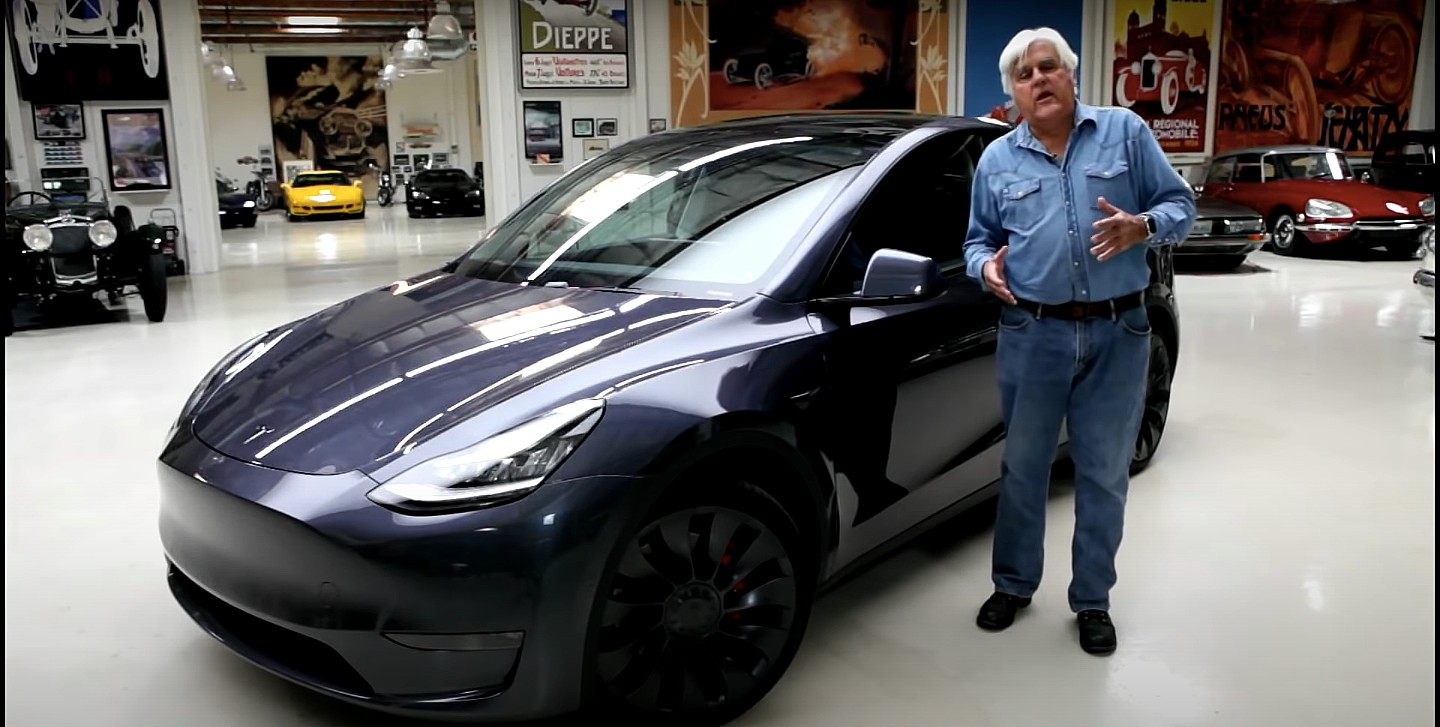 Tesla Model Y gets the full ‘Jay Leno’s Garage’ treatment: ‘It is fun, and it is addictive’

Devoted automotive enthusiast and outspoken Tesla fan Jay Leno got his hands on the Model Y Performance, the electric automaker’s newest crossover. Leno, a retired late-night talk show host, has had a long history of dealing with some of the world’s most impressive and famous cars. From a man whose car collection is worth an estimated $52 million, Leno has seen it all, which makes him an ideal candidate to give an honest and legitimate review of the Model Y.

Leno has a storied history with Tesla vehicles. After coming into contact with the first-ever production model of the Tesla Roadster in 2008, which Elon Musk delivered himself, Leno has owned a 2012 Model S and has also gotten firsthand looks at the Cybertruck and the Next-Gen Roadster.

The Model Y is different, though. It is Tesla’s second “mass-market” vehicle behind the Model 3, and it is expected to be the company’s most popular vehicle. Leno’s thoughts on the car, and his test of the Performance variant’s instant torque, gave plenty of insight for anyone walking the hypothetical tightrope between buying the vehicle and holding off.

Undoubtedly one of Leno’s favorite parts of the Model Y, which also applies to any Tesla vehicle, is the fact that the car is primarily locally sourced. “I like American-made stuff,” he said. While recognizing that Tesla employees do not make some of the car’s parts, the vast majority of the vehicle is. The seats, for example, are manufactured at a facility just a few miles away from where the cars are made in Northern California.

Leno’s analysis sheds light on the fact that the car is perfect for the “young family.” The speed, particularly in the Performance variant, is excellent for those who want to have some fun while going from Point A to Point B. Meanwhile, the spacious trunk and fold-down rear seats would adequately pack a canoe, kayak, or simply give the kids enough room to make it to soccer practice comfortably. Leno even states that the Model Y could be the perfect place to sleep in an emergency.

The heat pump that Tesla included in the Model Y was all the buzz in early-2020. Leno mentions that the efficiency of a heat pump highlights and compliments the efficiency of the vehicle overall, citing the system’s past uses in other cars. The system was included to help with range loss in cold climates, which was an issue with owners who dealt with long, harsh winters while driving their electric cars.

Despite recent reports from Edmunds that have stated Tesla’s minimalistic interior design is dangerous and inconvenient, Leno is a fan of what the Model Y looks like from the inside. From the wireless charging to the wood grain dash panel, Leno is in favor of Tesla’s design. It has certainly made the past interior designs of luxury vehicles look more intimidating than they are. Still, a large screen and a couple of steering wheel buttons are self-explanatory, and Leno enjoys it.

Leno admits that the Y feels a lot like his 2012 Model S, but the Y gives a slightly different experience considering its shape and center of gravity. The build of the car certainly doesn’t take away from the Performance. “You get the speed of a muscle car, with all the load-carrying capacity of a crossover. It’s a very eminently practical vehicle, and it’s fast,” Leno said. “It is fun, and it is addictive.”

Leno is a fan of Tesla, and the Model Y is just another vehicle that he loves. He stated that even though he likes the all-electric crossover, “I’m gonna wait for one of those Roadsters.” Leno does not have any children or grandchildren to haul around, and while he loves the sustainable aspect of Tesla, he has no use for an electric crossover. His Model S is still his daily driver because he believes the environmental impact is crucial and practical, and it fits him and his wife comfortably and in sleek style.

Tesla Model Y gets the full ‘Jay Leno’s Garage’ treatment: ‘It is fun, and it is addictive’