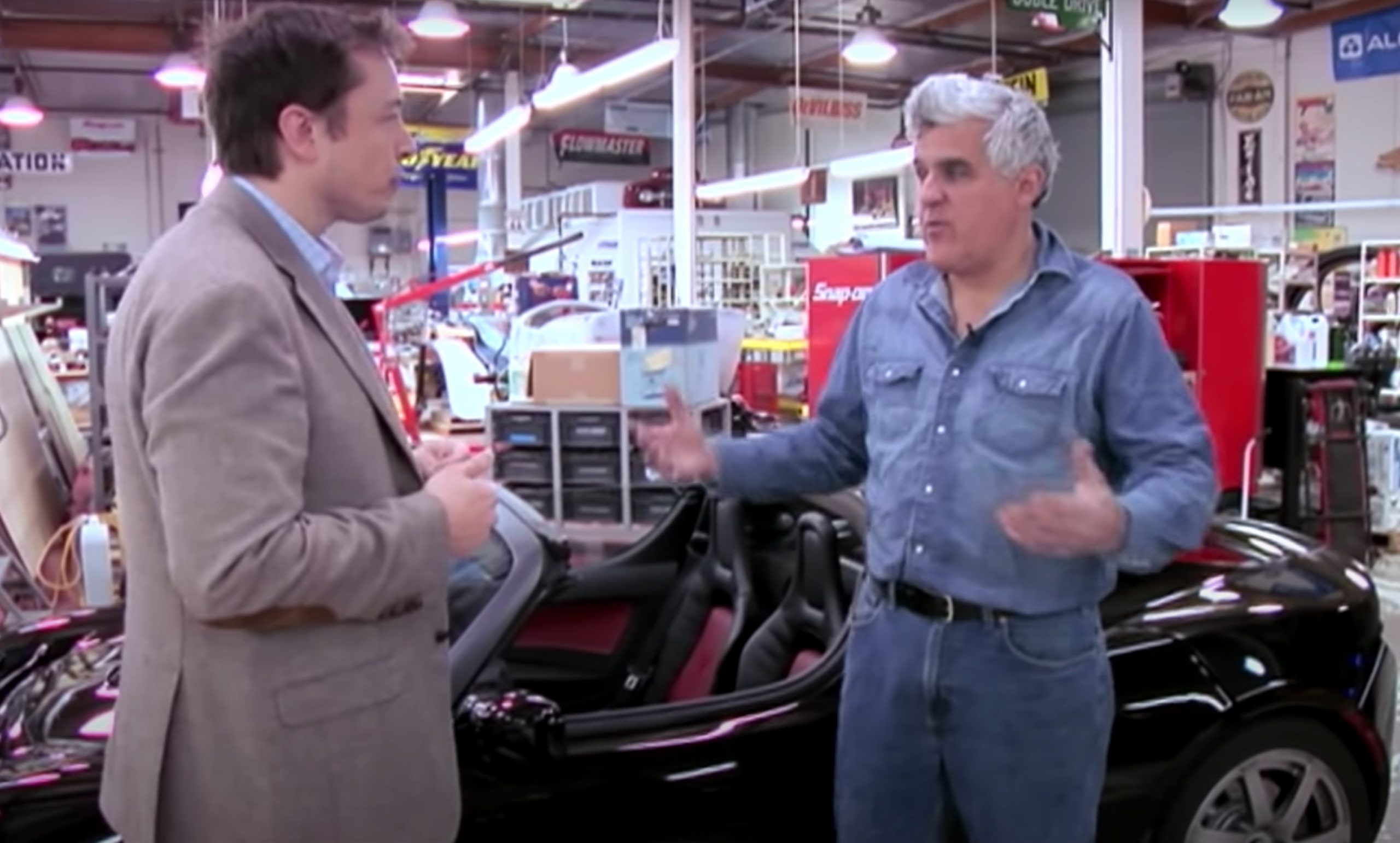 Jay Leno’s legendary career in television led to him chasing his passion for driving and owning the fastest, most expensive, and most unique vehicles in the world. On April 19, Leno released previously unseen footage of a young Tesla CEO Elon Musk, bringing him the first production model of the Roadster.

Perhaps what is most impressive is that twelve years later, Tesla continues to quench Leno’s thirst for automobiles, despite owning some of the rarest and most sought after cars in the world. The 2008 Roadster ignited Jay’s interest in the next generation of high-performance and electrified transportation. Before taking the silent sports car for a spin throughout Los Angeles, Leno was educated on the vehicle’s finer points from Elon Musk himself.

Leno and Musk’s relationship started at the former late-night show host’s garage in Los Angeles. Musk delivered the first-ever Tesla Roadster to Leno during an overcast day in 2008, where the CEO of the then-named “Tesla Motors” took Jay through a crash course of how the electric vehicle startup was building its initial vehicle.

The Roadster’s design was based on the Lotus Elise but utilized no Lotus parts for its exterior. The body was made out of carbon fiber and manufactured by French supplier Sotira. The 6,831 battery cells were put into a pack with blades and powered the battery enough to give the car 244 miles of EPA estimated range when fully charged. The vehicle’s weight was roughly 30% heavier than its inspiration in the Lotus; it offered a longer body and a battery pack that contributed significantly to the increase in mass.

Leno was impressed by the instant torque, the aerodynamics, and the aesthetically-pleasing shape of the car. “I just want to say, it’s a real sports car, it handles good, it’s fast, and hey, if this is the future, I’m not that worried,” Leno yells into his microphone before speeding away.

Fast forward eleven years later in November 2019. In Hawthorne, California, at a rocket ship manufacturing facility, Tesla is at it again. This time, it was unveiling its sixth vehicle, The Cybertruck, which would inevitably end up in the hands of Jay Leno in January 2020, after it was spotted outside SpaceX headquarters during the filming a segment of Jay Leno’s Garage.

Leno’s collection of cars includes some of the best and most rare vehicles on Earth. Despite having a garage filled with automobiles that is worth an estimated $52 million, his commentary when describing Tesla’s vehicles speaks for itself.

A vocal supporter of the electric vehicle movement and Tesla in specific, Leno said his love for the electric vehicle company comes from a battery car’s clear-as-day advantage over internal combustion engines. “There’s no maintenance. They’re faster than the gas car. So there’s almost no reason to have a gas car unless you’re doing long-haul duty.”

Leno sees a future that involves more electric vehicles than internal combustion ones. His extensive knowledge of the automotive industry describes a transition that seems to be the equivalent of when gas cars took over in 1911,” he said to CNBC. “Steam ran everything from 1800 to about 1911. Then internal combustion took over from 1911 to right about now. And I predict that a child born today probably has as much chance of driving in a gas car as people today have been driving a car with a stick shift.”

In a world where any car is available to Leno, his decision to continuously mention Tesla shows the impressive nature of the company’s cars. Twelve years after the talk show host and comedian drove the Roadster, it remains on his mind. So much so that it incited him to share with the world footage that has not been seen before.

Watch Jay Leno’s throwback footage of the 2008 Tesla Roadster below.