I never get too excited or depressed about Tesla’s stock price. Stock analysts worry, and a lot. I can’t imagine how they ever sleep at night knowing that during those hours they are completely off the influence grid. Because Tesla went public it made a new bed and as a consequence, has at least two major challenges it must constantly consider.

Disclaimer: I own a modest number of Tesla shares and have for years, but it’s not my retirement plan and never will be. For me the primary investment is the Mission of Tesla, which for now means the Model S. I’ve owned one since June 2013.

The idea that someone would have the courage (and smarts) to start a car company from scratch and be able to differentiate it from all other automakers, as well as their products in every way, was extremely attractive to me. Others have tried, Tucker, DeLorean, but they were trying to compete with essentially the same formula. That rarely works out. In this case we have disruption and not the bullying kind which is what we often see in tech sector firms.

Car Guys are Wired that Way

I was nearly born in a car. My mother used to regale me with the story of how she just barely made it to the hospital. Five more minutes and I would have emerged while in the back seat of a 1954 Chevrolet Delray. Growing up I was surrounded by relatives who raced cars, worked on automobile, both personal and commercial, and sold them to the public. I remember sitting in my Uncle’s Chevrolet sales room in Ohio while we were visiting one summer and seeing a sign that read, “A new Chevrolet is sold every minute.” Gasoline and oil ran through my veins and I inhaled more carbon monoxide helping my dad in the garage than was probably good for me. For the record, here’s a list of all the cars my father owned. I think it was all of them. The year column indicates when the car was manufactured, not when he purchased it. 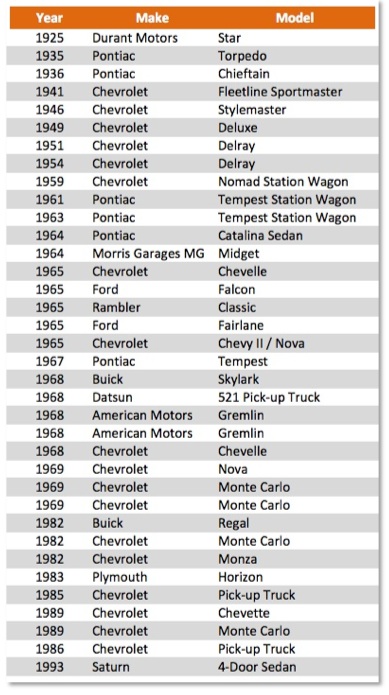 Yes, there’s a very big gap between 1969 and 1982. Completely unexplained. Maybe we both failed to make entries in the diary. Never mind, it’s more fun to call “slacker.” We lost my father to cancer in 1992. He would have been proud to say he preceded his latest car in death by a full year. I frequently imagine what it would be like to pull up in his driveway with my Model S and take him for a ride.

As you can see, my father’s list is heavily weighted toward U.S. carmakers, especially GeneralMotors.The recent stories about how GM covered up defective parts for decades was disturbing to me as someone who rode in, drove and owned them as an adult. The last time I owned a GM car was 1989. I switched because I couldn’t afford to pay the maintenance fees.

Mission Control, We are Go for Launch

When President John F. Kennedy challenged America to “land a man on the moon and return him safely” in 1961, it was the catalyst for a series of missions meticulously planned and executed by NASA. Most had doubts we could do it successfully. The ones who believed worked at NASA. They developed a phased approach with three programs; Mercury, Gemini and Apollo. Mercury set out to successfully orbit the earth, study the ability to operate in space and recover both the astronaut and his craft. Gemini’s role was to study the effects of long term space missions on astronauts, perfect re-entry procedures and give astronauts extended practice time in a weightless environment. Once these were accomplished, the third program could begin. Apollo was about landing a man on the moon and returning him safely. I was enthralled with the space program growing up. I held my breath at every launch, was glued to the television for each mission and wondered what would come next.

Palo Alto, We May Have a Problem 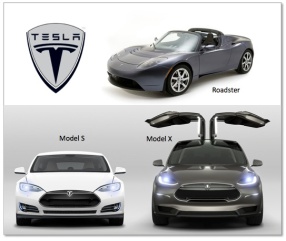 Tesla is on a similar path. They started with the Roadster as a commercial prototype that would tell them lots about the viability of an electric car. From that came the Model S, an amazing form of Personal Transportation that won Motor Trend’s Car of the Year in 2013 and was rated the safest automobile ever built in tests conducted by the National Highway Traffic Safety Administration (NHTSA) in the same year. I view the forthcoming Model X, a SUV version of the Model S, together as a stepping stone to the third stage; the Model III. A smaller, much more affordable car within reach of a large number of U.S. households. Assuming they can progress, the Model E will bring them closer to accomplishing the Tesla mission:

To accelerate the advent of sustainable transport by bringing compelling mass market electric cars to market as soon as possible.

The cost of the three NASA programs is hard to pin down, but many sources say that Mercury cost about cost $277 million in 1965 dollars, Gemini cost $1.3 Billion in 1967 dollars and Apollo $20.4 Billion in 1970 dollars. Obviously these number increase greatly when you convert them to today’s dollars. These missions were a stunning achievement and brought innovative technology to the private sector in numerous ways. In other words, we all gained benefit from these programs.

The point of quoting the cost figures is to bring perspective into the discussion. Today’s dollars always appear small when we look back a decade or two. The difference in these programs is that NASA was appropriated the funds from Congress, Tesla must navigate the murky waters of being a public company.

Elon Musk’s release of all of Tesla’s patents was a courageous move. He realizes that no single car company can deliver enough electric vehicles to make a real difference in the planet’s climate. The intellectual property is out there. Others can choose to assist or ignore.

BMW and Chevrolet have purchased, taken apart and reassembled the Model S in their war rooms. Why? Most likely to see how they can defeat Tesla. It’s a competitive game after all, including how Tesla sells its cars. A combined mission here, like the one NASA mounted would be an amazing feat of American collaborative engineering on a level never before achieved, this time on ground vehicles. Automakers coming together, including Tesla, could bring about a change much faster than we could even imagine. I know I’m describing a fantasy in the world of stocks and profits.

Can Tesla really do it? Well, they landed the real estate for the Gigafactory. A great start. I believe it can be done and am pulling for them to succeed. Actually more than pulling for them. I drive the car and and am an ambassador for the brand everyday. I wish them success, not just to disrupt, but to innovate on a grand scale. To change history. A chance like that doesn’t come along all that often.