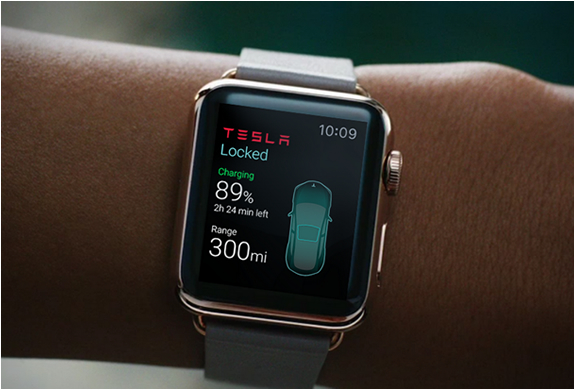 Ukraine-based ELEKS, a provider of software engineering for global corporations, unveiled its journey in developing a Tesla Motors app for the soon-to-be released Apple watch in April.

Via a blog post, “Apple Watch. Tesla Car. How Far Can We Drive Them?,” Eleks documents the overall challenges in developing an app on the new Apple Watch operating system and what Tesla Motors data is ported into the app. See info below from ELEKS:

The developer accessed Tesla data via its web-service API and funnel in that data to the watch app.

The company says,”the app perfectly lines up with the concept of smart watches, lets the user access critical information about the car and allows managing it quickly without wasting time on taking out and unlocking the phone.”

The screen shots of the Apple Watch show a pretty elegant product and so is the Tesla Motors app. Snazzy video below.