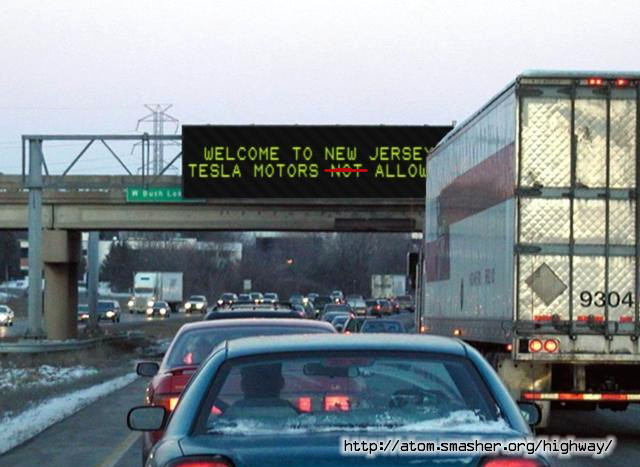 We added the bill below from our previous article.

Following the update of our story yesterday, Tesla and other electric carmakers were given the go ahead to sell cars directly in the state of New Jersey. Bill (A3216) not only allows Tesla Motors to restart the sales of the Model S in the state of New Jersey, but it also gives it the go ahead to open two more stores.The vote came through unanimously at 4-0. No one testified against it.

Although the bill is making its way to its final destination, it won a landmark decision today at the state Assembly Consumer Affairs Committee. It would seem unlikely it would stall and not be passed.

If there is a moral to the story, it would be, you can’t oppose new and disruptive business models. When people and consumers want something, they need to be taken into consideration. This should serve as a clear sign that electric vehicle (EV) are not only here to stay, but command a strong voice in the community. At the very least, it should remind us that opposition can become a formidable tool for freedom of choice. A wall is built one brick at a time, and this brick is a foundation in and of itself.

Diarmuid O’Connell, Tesla’s vice president of business development was quoted as saying: “This is a super important issue for us in New Jersey, and as some of you would know, nationally as well,” O’Connell said, adding the bill would “allow us to in a modest way and a reasonable way conduct the business of educating the public about electric vehicles and getting as many of those vehicles on the road as quickly as possible.”

Assemblyman Tim Eustace (D-Bergen) who publicly backed and sponsored the bill, said: “New Jersey prides itself as being pro-business, pro-innovative and pro-jobs. And this is a company that is an American company, an American idea. I think we would be mistaken if we didn’t’ reverse

What to watch out for

Next, we’ll keep a close look out to see if Arizona and Texas will reconsider the Tesla Motors ban from selling directly. Ohio was next in line, but decided to avoid the New Jersey fiasco. In fact, seeing the uproar, the state invited the company to the table for negotiations. It seems most states will have to carefully weigh their decisions in the future.