Being a company led by an unorthodox CEO with roots in Silicon Valley, Tesla is on the bleeding edge of the automotive market. Tech is evident in Tesla’s DNA, from the automation in its factories to the deep integration of software on its electric vehicles. If a recently published patent is any indication, even more tech-driven solutions are coming to Tesla’s production lines.

A recent patent, dubbed as “Augmented Reality Application for Manufacturing,” was published last Thursday. In the description of the patent, Tesla noted that existing automotive manufacturing techniques are time-consuming and still require a notable amount of manual calibration and inspection. An example of this is the practice of marking joints and/or inspecting dimensional accuracy of car components by having workers manually overlay plastic molds over a sheet metal object to mark certain parts. These processes take a lot of time and effort, resulting in extra operational costs.

Tesla’s solution is rather simple. Instead of using manual processes to perform tasks that include setup, configuration, calibration, and quality inspection, it would be better to utilize available technologies to make operations faster and more precise. One of these technologies is computer vision and augmented reality tools.

Tesla’s patent uses AR applications and computer vision to “identify an object of interest and the relationship between a user and the object.” The AR device captures a live view of an object, determines the location of the device, as well as the type of the object of interest. By using this system, workers will be able to view instant data about the components they are working on.

Apart from allowing production to move faster, the AR-based system could also be used for quality inspections. Tesla even noted that such a system could be tapped to determine if panels in vehicles are within tolerances, and if holes in the electric cars’ frames are drilled or punched at the correct location. 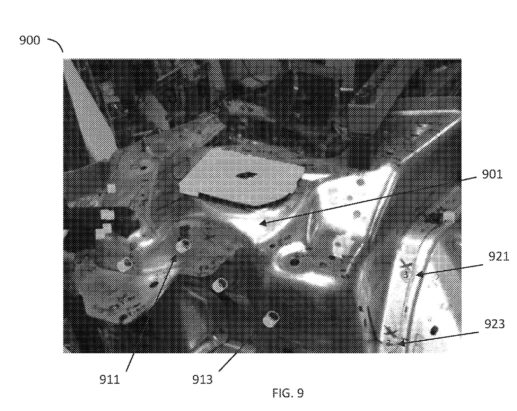 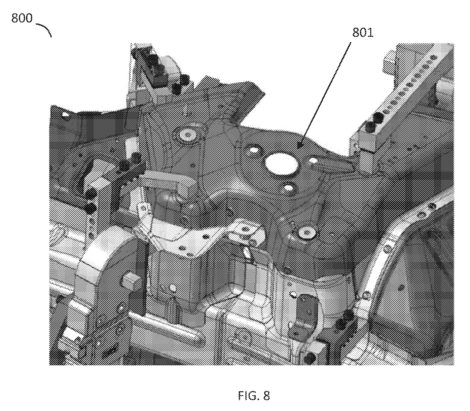 “There are many practical applications for the augmented reality (AR) manufacturing techniques discussed herein. In some embodiments, the AR device is used to program a robot to assemble one or more parts including identifying and marking the precise location and order of welds, self-pierced rivets, laser welds, adhesives, sealers, holes, fasteners, or other mechanical joints, etc. As another example, the AR device can be used to inspect the quality of the assembly for a vehicle such as whether the locations of welds are correct, whether the interfaces between parts such as body panels are within tolerances, whether holes are drilled or punched at the correct location, whether the fit and finish of assembly is correct, etc.

“In some embodiments, vision recognition is utilized. Individual sheet metal components and/or assemblies that are or will be part of the body-in-white (also known as the structural frame or body) are recognized. Once the component/system has been identified, computer-aided design (CAD) information (e.g., information and/or symbols associated with the mechanical joints) is aligned/scaled and rendered on corresponding identified physical model components. The application of the disclosed techniques applies to many different contexts of manufacturing.

“For example, the AR device can be used to map the quality of a coating on an automotive part such as determining the thickness of an e-coating on a vehicle body and identifying problem areas that are difficult to coat. In some embodiments, the AR device is used to map out a factory floor and to identify the precise location and orientation robots should be installed at to build out an assembly line. The robots are positioned based on the AR device such that the installed robots will not interfere with each other or other obstructions in the environment.”

An AR-based system that augments production fits very well with Tesla’s reputation as a car maker that never stays stagnant. During an interview at Gigafactory 1, Tesla President of Automotive Jerome Guillen mentioned that the company’s battery cells — while already industry-leading — are always evolving. Elon Musk echoed this idea as well, when he noted that improvements to Tesla’s electric cars are being rolled out as soon as they are ready. Optimizations such as the use of AR and computer vision in the production line is yet another example.