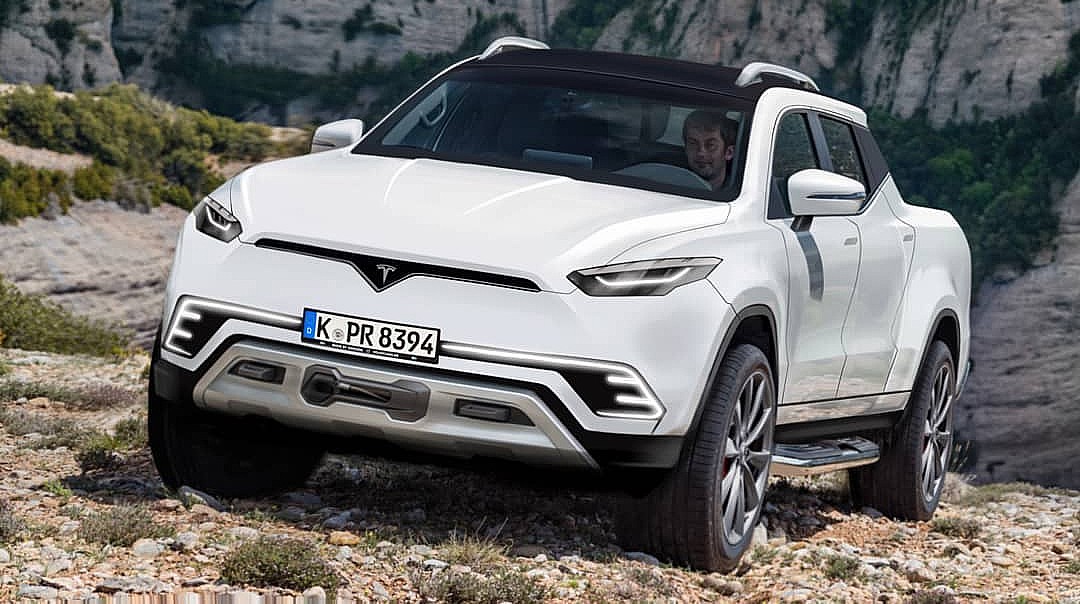 A render of the Tesla Pickup Truck. (Credit: Giorgi Tedoradze/Instagram)

A Georgia-based industrial designer has provided what could very well be the best and most grounded render of Tesla’s upcoming all-electric pickup truck, which is expected to be unveiled later this year. The render, which was designed by auto enthusiast Giorgi Tedoradze, depicts the Tesla Pickup Truck as a massive machine that looks as tough as it is unashamedly electric.

The vehicle envisioned by the designer looks particularly stunning, with its high ground clearance, its wide stance, its muscular hood, and a fascia that appears to have been inspired by design elements of Tesla’s existing vehicles such as the Model X and Model 3. Giorgi Tedoradze only provided a quarter view of his Tesla Pickup Truck render, but it is evident that his design is optimized for off-road adventures.

Overall, the render gives the impression that the Tesla Truck is a strong, robust EV that can practically go anywhere, which makes perfect sense because the upcoming pickup most definitely is.

Elon Musk has noted that Tesla’s upcoming pickup truck will be loaded to the teeth with tech, to the point where it won’t look out of place in the set of the Blade Runner franchise due to its notably “cyberpunk” design. In a podcast with veteran tech journalist Kara Swisher last November, Musk stated that he is excited about the vehicle, but if it does not do too well due to its design, Tesla would release a more “conventional” truck. The spirit of this more conventional take on Tesla’s pickup appears to have been captured perfectly in Tedoradze’s render.

The design of the Tesla Pickup Truck remains under wraps. Elon Musk shared a couple of early sketches of the vehicle during the Semi’s unveiling in 2017, depicting the pickup as a large machine whose appearance is heavily based on the electric long-hauler. Musk later showed a teaser of the actual vehicle’s design in the Model Y unveiling event, though the image only featured a cryptic, angular, lighted component that the CEO later confirmed was part of the vehicle’s front.

Tesla’s Pickup Truck will be entering a market that will likely be populated in the near future. The pickup truck segment is very lucrative in regions such as the United States, as shown by the fact that the country’s most popular vehicle is the Ford F-150. Considering that the pickup segment is currently dominated by more traditional workhorses such as the Chevy Silverado and the Dodge RAM, the industry is ripe for disruption.

All-electric pickups from other carmakers are coming, two of which are the Rivian R1T and the Ford F-150 EV. Both electric trucks have garnered a positive reaction from the EV community, the former partly due to Rivian’s clean-sheet approach, and the latter due to Ford’s pedigree in truck-building. With this in mind, it seems certain that when the Tesla Truck makes it to market, the arena of battery-electric pickups would likely become very, very competitive.