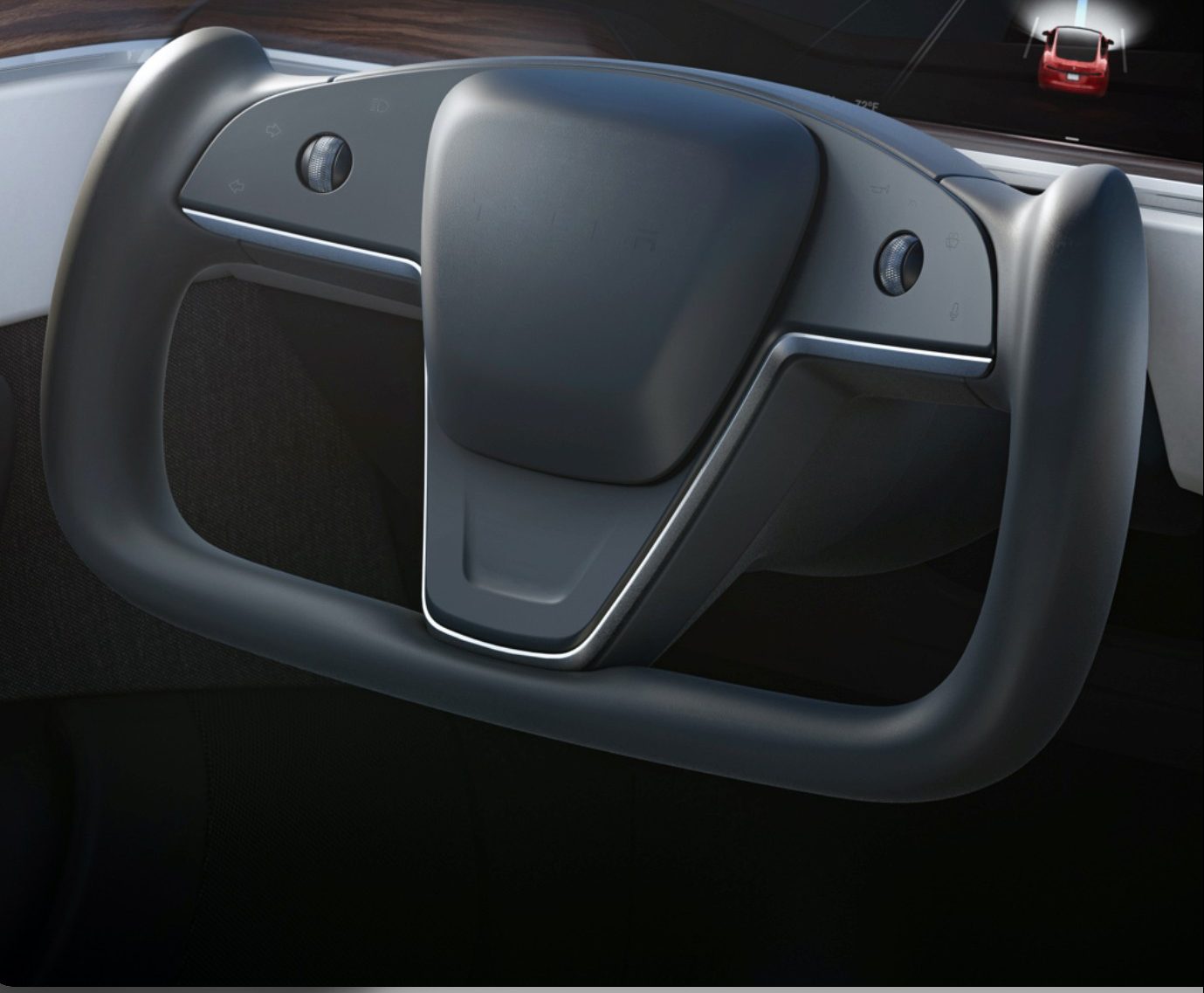 Tesla is priming customers for a disappearing steering wheel

Tesla’s introduction of the “Yoke Steering Wheel” with the Model S refresh saw mixed reviews upon initial examination. The always sporty Model S has adopted a new, supercar-like interior, with the Yoke capping off Tesla’s redesign to the flagship sedan.

However, upon further examination, I realized that Tesla isn’t priming the Model S to be a supercar. Of course, the introduction of the face-melting Plaid+ variant is undoubtedly a nod toward those who require a little extra pep from the all-electric powerhouse. However, the Yoke steering wheel is undoubtedly a minimalization of arguably the most necessary piece of a car’s interior. But Tesla’s mission is self-driving, so it seems the company is actually priming drivers to get used to less and less of a steering wheel and could be the reason for the size reduction.

It can be noted that the Yoke does not cover or reduce visibility to the instrument panel or the windshield. It is a low-sitting steering column that provides maximum visibility during a drive. It is certainly complimentary of the new powertrain and performance specifications with its sporty look. However, the big picture is that Tesla is preparing its first sedan for a future of driverless navigation. 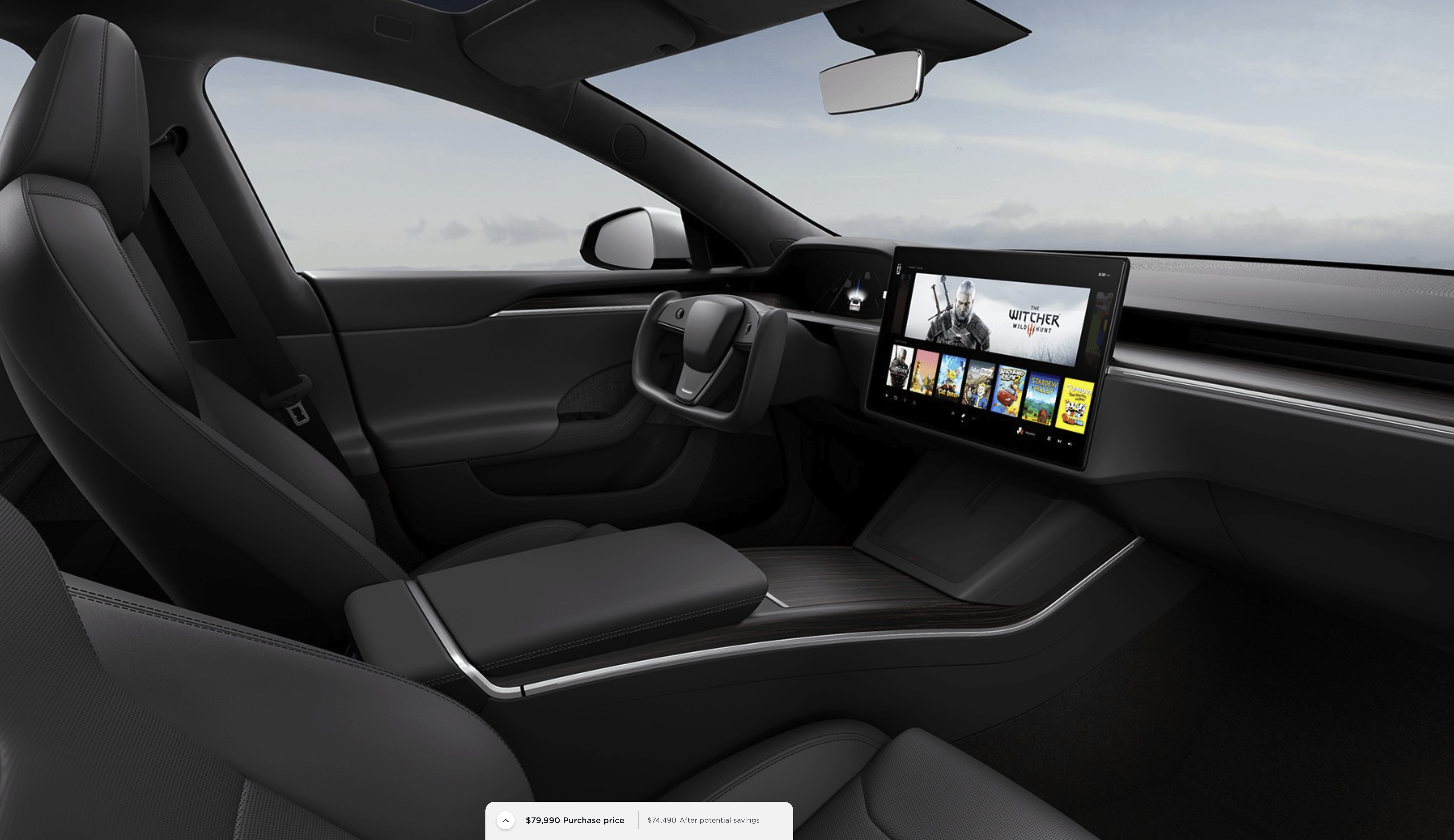 For the past few months, Tesla has really made some serious leaps in the pursuit of Full Self-Driving. While the company’s robust and intricate FSD Beta is among the most successful self-driving platforms, there is still plenty of room for improvement. Of course, Tesla will take any steps necessary to increase the accuracy of its self-driving project, but really, it only takes the drivers to do that, as the Neural Network continues to make vehicles smarter with every mile driven.

As self-driving moves closer to reality, Tesla is beginning to minimize its interiors even more than ever before. While the HVAC system is now streamlined to eliminate outdated vents, the car is, in effect, becoming a moving entertainment center. As photographs of the new Model S interior show, there are three screens, storage compartments, a steering wheel, and pedals. There is not much more on the inside, appealing to a modern contemporary taste of interior design while still upholding the classic safety standards of the automobile. Things are becoming smaller, more simple, and less cluttered inside the car in preparation for the self-driving future that will inevitably confront us within the near future. When, exactly, nobody knows. But it will be soon, Elon Musk says.

The car, internally, is becoming more sophisticated, smarter, complex, and intricate with every mile driven. The inside of the car is doing the exact opposite. While the parts of the vehicle that control navigation are minimizing or disappearing, the car’s entertainment is becoming the focal point.

Many noticed that while the steering wheel became smaller, it didn’t disappear altogether. It can’t. At least not at this point in time, because Tesla hasn’t attained Level 5 autonomy yet. However, the stalks, which control the turn signals, headlights, wipers, and the gearshift on a Tesla, have all been removed. It’s the beginning of the end of drivers being able to control these features of the car. Eventually, the vehicle will do all of these things without any interference or intervention from the person who is in control.

While the stalks have turned into buttons on the steering yoke, the removal hints toward the next generation of minimalistic Tesla interiors. Eventually, we may think the Model 3 and Model Y interior was clunky and too busy. Looking at past photos of the Model S interior already gives me that feeling when comparing it to the new interior. Of course, things improve over time, and it was only a matter of when Tesla decided to do this, considering the self-driving suite has been a goal of Musk’s for several years.

No stalks on the new Tesla Model S/X steering wheel, so here’s how you use the turn signals pic.twitter.com/bVdGVsvj8t

Eventually, Tesla will continue to phase out small, insignificant parts of the car to make an easier transition later on when FSD is fully rolled out, and the automaker captures full autonomy. It wouldn’t make sense not to update the interior along the way, and instead, have people go from a car with normal interior designs to a car with literally nothing but screens.

Most importantly, Tesla could also offer a full-wheel setup for those who are not in favor of the Yoke. Many people texted and contacted me, stating that they were not a huge fan of the new design for a daily driver and that it could be more advantageous to introduce the option for a full-wheel design later on. I think that the Yoke is certainly very objective and, while some find it appealing and interesting, others do not. There is no right or wrong answer in terms of what is more advantageous, but Tesla’s goal is to begin preparing drivers for a car that will drive itself, eliminating the need for a wheel or any other regularly used control mechanisms within a car.

It has already begun.

Tesla is priming customers for a disappearing steering wheel