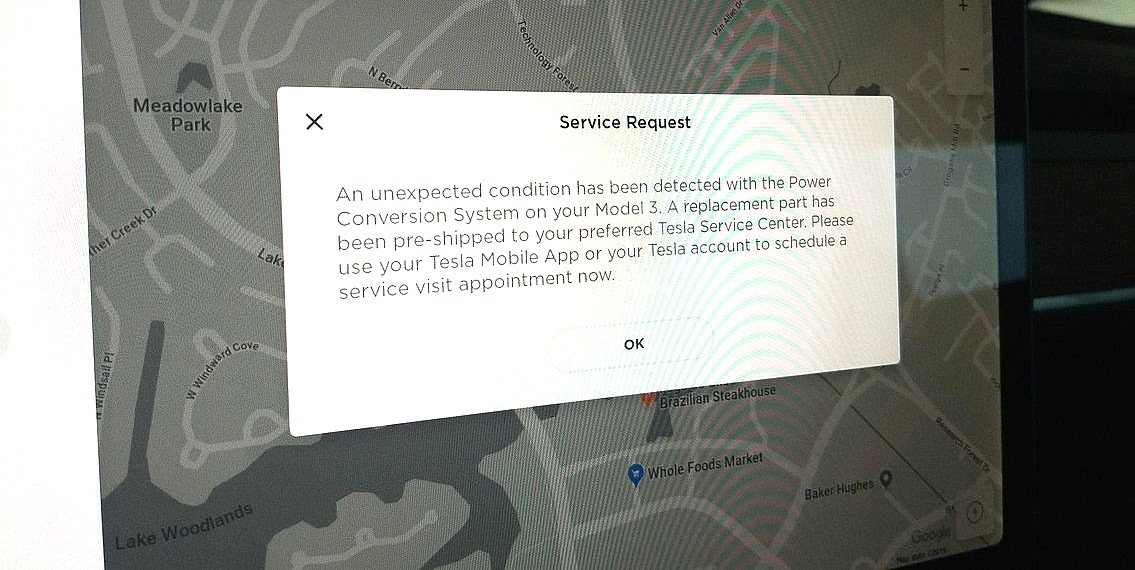 Tesla has improved its electric cars’ ownership experience once more. As recently reported by a Model 3 owner, Tesla’s vehicles now have the capability to self-diagnose issues and automatically pre-order replacement parts as needed. Once parts are ordered, Tesla owners could set up an appointment at a service center to get their vehicles fixed.

One of the initial reports of Tesla’s new service improvement came from Model 3 owner and r/TeslaMotors subreddit member u/houston_wehaveaprblm, who posted a message that showed up on his electric car’s display. The message noted that a replacement part from Tesla had been pre-ordered and pre-shipped to a selected Service Center after the vehicle detected an “unexpected condition” in one of its components.

“An unexpected condition has been detected with the Power Conversion System on your Model 3. A replacement part has been pre-shipped to your preferred Tesla Service Center. Please use your Tesla Mobile App or your Tesla account to schedule a service visit appointment now.”

Owners of Tesla’s vehicles will most definitely appreciate this new proactive service feature. By allowing electric cars to order parts that require replacement on their own, Tesla could reduce the time required to address the maintenance needs of its vehicles. With parts preferably ready by the time an appointment is scheduled, owners will not need to wait very long to get their vehicles serviced.

Elon Musk has pledged to improve the service experience for its electric cars’ owners. He mentioned this during the Q4 2018 earnings call, when he described service as “one of our major priorities.” During the Q&A session with analysts and reporters, Musk admitted that some of Tesla’s parts supply chain has been inefficient in the past, at one point even describing some of the company’s processes as “super dumb.” Musk pledged to roll out improvements as well, stating that Tesla just has to be “smarter about sending parts directly to service centers.”

Ultimately, the recently reported automatic pre-ordering system for faulty parts is not a cure-all for Tesla’s service challenges, but it’s definitely a step towards the right decision. Apart from the recently-introduced proactive feature, Tesla has also been working on expanding its mobile service unit, allowing the company to address a good part of its fleet’s service and maintenance needs at the convenience of electric car owners. Tesla has also optimized its mobile app’s integration to its vehicles’ service and maintenance processes, allowing owners to view the status of their cars while repairs are being conducted.