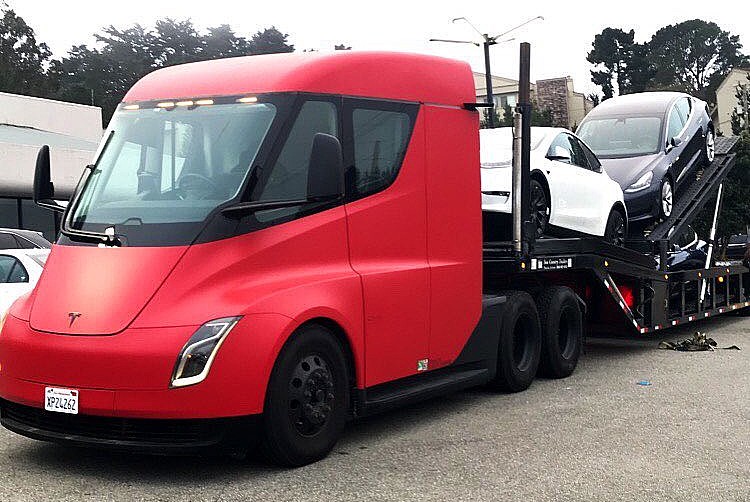 Recent images from the electric car community have revealed that the Tesla Semi has been deployed once more as part of the company’s delivery fleet in its ongoing end-of-quarter push. Tesla is currently undergoing a massive effort to produce and deliver as many vehicles as it can before the end of the quarter, and based on the Semi’s sightings, it appears that it’s currently all-hands-on-deck at the automaker.

The photo of the Semi in one of its vehicle delivery trips was taken by Tesla community member @DanAndJohnson and shared by the Tesla Owners Silicon Valley group. As could be seen in the image, the Semi was carrying three vehicles that appear to be Model 3 on its trailer. This is not the first time that Tesla has done something like this, as both the matte red and silver Semi prototypes have been sighted in the past helping out with customer deliveries.

Utilizing the Tesla Semi for its vehicle deliveries allows the electric car maker to further test and validate the all-electric Class 8 truck’s real-world capabilities. The Semi, after all, is designed to compete in the trucking market, and that’s an industry that’s known to push its vehicles to their limits. For Tesla to disrupt the trucking segment to a comparable degree as the Model 3 in the midsize premium sedan market, the Semi would have to meet or exceed the EV community’s already-high expectations for it.

As noted by the Tesla Owners Silicon Valley group, the utilization of the Semi as a regular transport vehicle also provides a potential glimpse at the future of trucking — one that is dominated by zero-emissions vehicles. Efforts are already underway among both governments and private companies to push sustainable transportation, and vehicles like the Semi could play a key part in the transition.

A good example of these efforts came from Walmart Canada yesterday, when the company revealed that it would be more than tripling its initial Tesla Semi reservations for its fleet. Walmart Canada’s updated order comprised 130 units of the all-electric truck, which could help the retailer in its efforts to convert 20% of its existing fleet to electric power by the end of 2022.

In a press release, John Bayliss, Walmart Canada’s Senior Vice President of Logistics and Supply Chain noted that the Tesla Semi actually brings advantages when it comes to safety and innovation. “By converting 20% of our fleet to electric vehicles by the end of 2022 and committing to alternative power for all fleet vehicles by 2028, we are putting safety, innovation, and sustainability at the forefront of our logistics network,” he said.

The Tesla Semi is expected to be produced in Gigafactory Texas, which is currently being built “at the speed of Elon,” as per officials’ comments about the ongoing project. Considering that filings are pointing to a potential opening of Giga Texas as early as 2021, there seems to be a fair chance that customers like Walmart Canada will be able to receive their vehicles sooner than expected.