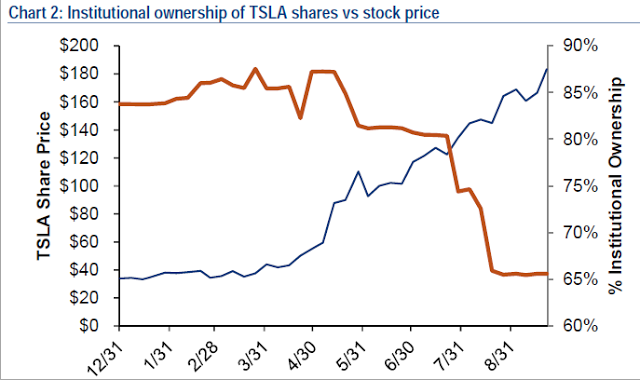 This is the fifth part in an ongoing series on electric vehicles, with a focus on Tesla Motors. See below for links to the rest of the series.

By Silicon Valley standards, 10-year-old Tesla Motors is middle-aged. But in the world of automotive startups, it’s just crossed a threshold few fledgling companies ever get near: profitability. Late last night California time — in time to make it clear this was no April Fools joke — the company announced it has delivered 4750 cars in the first quarter and expected to report an accounting profit when it announces its official results next month. While the company’s vehicles lack engines, in the past 6 months, it’s begun to hit on all cylinders:

Today, though, that future looks bright enough that the naysayers holding more than 30 million shares short may be wishing they were betting against something else. CEO Elon Musk mentioned on Twitter last week that he had a big announcement to make regarding Tesla (due tomorrow) and clarified last night that this isn’t it: “Also, some may differ, but imo the Tues news is arguably more important,” he wrote. Depending on the nature of that, I may be back with another post.

There was some more interesting news in yesterday’s press release on profitability. The company canceled an option to buy the Model S with the smallest battery, a version that retailed for just around $52,000 after the federal tax credit. Why? Lack of demand. It seems only 4% of buyers were opting for that smallest configuration. They’ll still get it, but instead of producing a battery that small, Tesla will sell them a car with the mid-sized battery and disable part of the capacity in software. If owners — present or future — wish to upgrade to the larger capacity, Tesla will allow them to purchase some software magic to make it happen. The mid-sized battery offers a range of just over 200 miles per the EPA and the smallest battery has about 2/3 the capacity. Given there was a $10,000 gap between the two, it’s noteworthy that people were rejecting the smallest battery so clearly.

This points out the radically different approach Tesla is taking versus Nissan with the Leaf and really everyone else building electric vehicles right now. The two sizes of Tesla people are choosing are 200+ mile vehicle while the other brands are sold as 70-80 mile commuter vehicles. Apparently, a “tweener” that gets around 140 miles wasn’t something Tesla customers wanted and might not be appealing to much of anyone as it doesn’t really address the “go almost anywhere” problem Tesla is solving and doesn’t really do much for commuters. (More than 80% of commutes in the U.S. can be made roundtrip in a Leaf.)

In addition to eliminating the small battery, Tesla also decided to build access to the Supercharger network in every car. It was already standard with the largest battery and is still an option with the smaller one, but now you can decide to add the option after purchase because — again — it’s a software change. The Superchargers are free “fill-ups” along highway corridors, but those with the smaller battery will pay $2000 for the privilege. This software-upgradeable car might not be as much of a milestone as a 200+ mile EV is, but it has already become a hallmark of the way Tesla works and really shows how Silicon Valley DNA can be an important part of this 21st century automaker.

When the company announced its earnings last quarter, the news actually disappointed investors. On some level, that was odd because the quarter inherently represented a transition where production was ramping up and it would be hard to really get a sense of what the business looked like on a steady-state basis. This quarter, however, is going to provide a very real snapshot into Tesla as a business. Through the rest of 2013 and well into next year, the company is likely to look as it does this quarter, with small improvements in unit shipments and gross margin over each quarter until the company begins delivering its Model X crossover late in 2014. None of that is likely exciting to watch, but it is likely to be material financially.

If deliveries do creep into the range of 6000-7000 per quarter — which is expected — and the company hits its gross margin goal of 25% by year end, this quarter’s profit is going to be pretty small compared to the ones set to come. It’s this kind of steady profitable growth upon which you build a company that will be around for a long time to come. And with the focus on larger batteries and more Superchargers, Tesla seems to be saying its cars are going to run long and far as well.