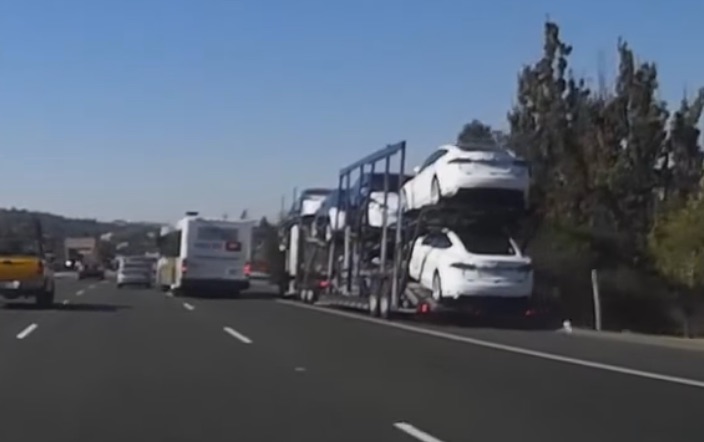 A truck full of Tesla Model S and Model X was involved in a heralding near-miss collision with a commuter bus last week on September 27 as the Silicon Valley automaker made record-breaking deliveries in Q3. The video posted to YouTube shows a County Connection commuter bus, serving San Ramon and the Contra Costa County 40 mile east of San Francisco and 25 miles north of the company’s Fremont factory, cutting across three lanes before forcing the trailer carrying six Teslas off the road.

With over a half million dollars worth of inventory inches away from crashing into a ditch along Interstate 680, the driver of the truck carrying the Model S and X is seen making an abrupt move onto the shoulder of the freeway, while narrowly scraping by a set of concrete dividers alongside the Interstate.

The video caught on dash cam is an example of the type of accidents that can come about as a result of human error. The bus appears to have not seen the truck carrying the fleet of Tesla vehicles and turned directly into its lane.

Tesla CEO Elon Musk’s vision for the future involves a world of fully autonomous vehicles that can be used for ride sharing and human transportation, but one that will also be responsible for freight hauling through a fleet of Tesla Semi trucks.

Could having a fleet of autonomous commuter and service trucks avoided this near-miss accident?