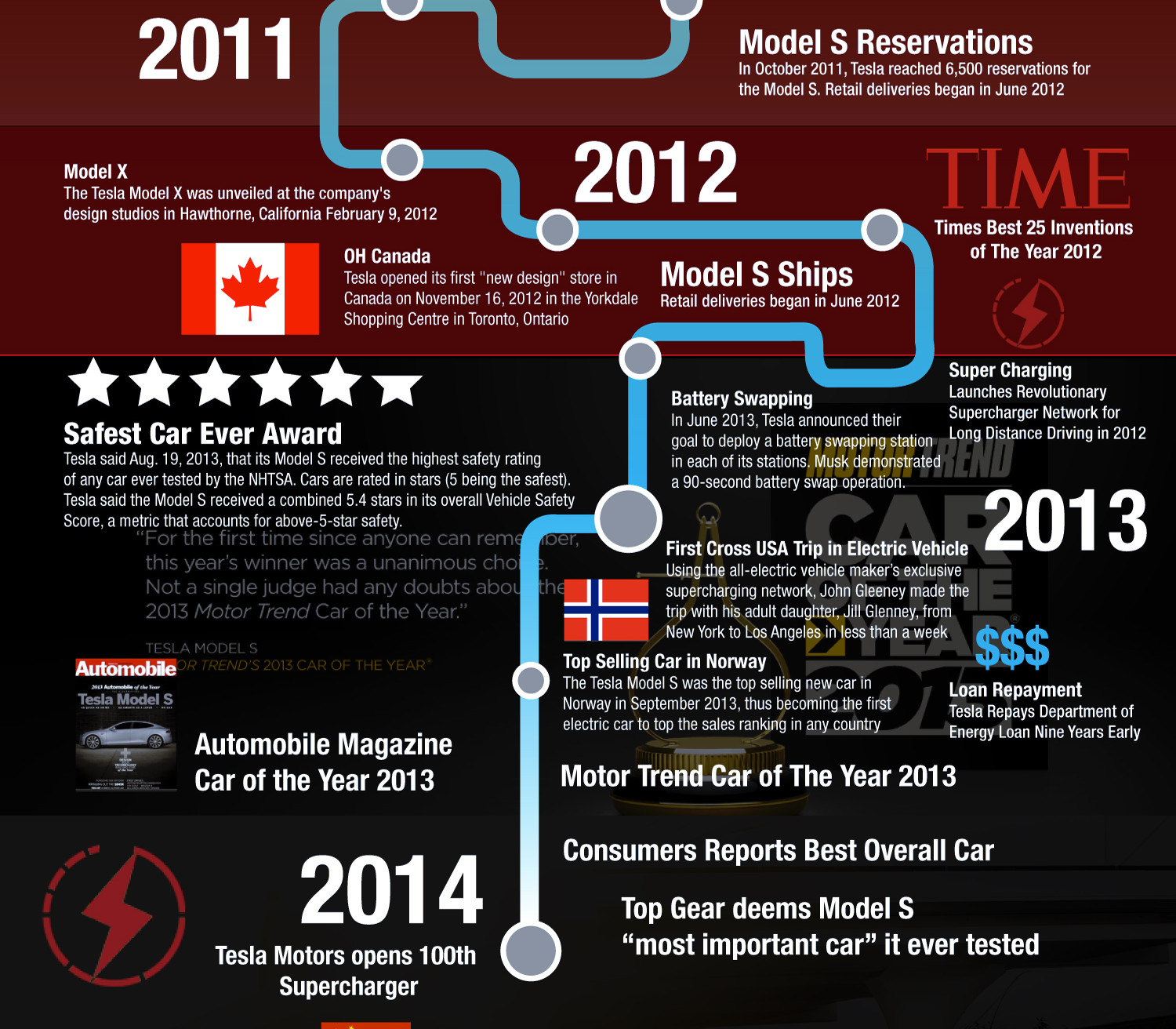 It’s difficult to refer to Tesla Motors as the small Californian startup these days. In a few years, the company has grown exponentially, challenging more industries than the biggest startup success stories in decades. An infographic from EVannex shows us Tesla’s progression in the midst of an automotive industry caught daydreaming, an energy sector happy with business as usual, and other far reaching consequences for many unsuspecting industries.

Where were you when you came on-board?

Matthew Pressman at EVannex asks this simple question, when did you come on-board the Tesla’s meteorite ascension to success? Was it in 2003 when Elon Musk and Martin Eberhard thought how cool a little electric performance car would be, or when the Roadster was publicly displayed in 2007? How about when the battery swapping event was held last year, putting to shame the amount of time it took an Audi sedan to fill its gasoline tank, or is it this week as the company celebrates its 100th Supercharger?

I came on-board when Chelsea Sexton was showing Elon Musk’s Roadster in 2007. However, I missed the opportunity to buy one and bitterly regret it to this day. I’ve always loved performance, but two things she said would forever change my life. She told me she changed the tires on her EV1 every 5,000 miles and that no BMW could keep up with her at a red light. Being an avid Alfa Romeo fan, those words resonated far within. I was intrigued and my suspicions were confirmed the day I drove an AC Propulsion eBox and finally, the crème de la crème, my friend’s Tesla Roadster. I was hooked instantaneously. The electric motor made 100% sense in a car or motorcycle. In fact, I was sad getting back into my beloved Alfa Romeo Spider, feeling the harsh limitations of engines and gearboxes matching.

I’ve written about Tesla ever since, watching its every move, trying to figure out the consequences for many industries caught in bottom line profits and courting Wall Street investors with short sight visions. Since then, Tesla has shown it has the right vision. Musk has surrounded himself with the right people and the company today shows how most company be run, with far reaching vision and not simply bottom line profits as their number one preoccupation.

EVannex, Tesla accessories and the prize

Who is EVannex? EVannex offers a great line of accessories for your Tesla lifestyle. Ranging from elegant center console inserts, to redesigned cupholders, to wheels and more, the company offers great complements to an already great car. The company stands out in many ways, as it offers very nice additions without going overboard into bling-bling land. Often times, tuners and accessory makers cross the fine line between enhancing and completely losing the original feel of the car. EVannex doesn’t. They keep the Tesla Model S’ feel and add a touch of je ne sais quoi.

Evanex, the folks behind this cool infographic are throwing in a contest I invite you to join. Find out more on their Facebook page.

You can tag yourself on the time line, showing when you bought your first Tesla. This will give you a chance to win an EVannex prize pack, either a Driving the Future Sculpture or the Owning Model S Book.