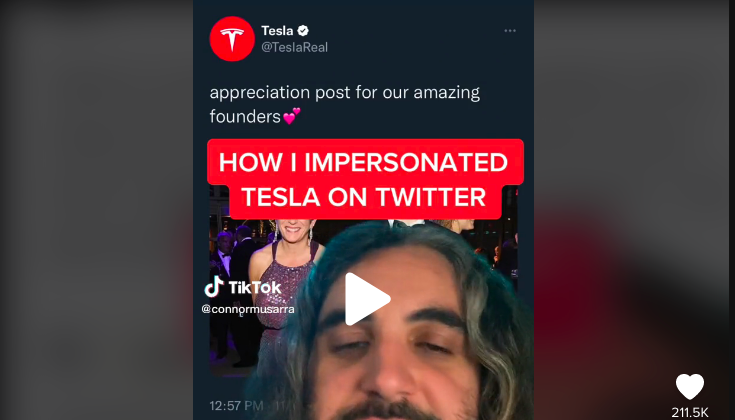 Tesla’s Twitter impersonator told his TikTok followers how he impersonated Tesla and that he wanted to do another account for SpaceX. Tesla and now Twitter CEO Elon Musk has had his hands full with all of the Twitter shenanigans. After rolling out the new Twitter Blue for $7.99 with paid verifications, many users paid the money to cause a bit of havoc by impersonating brands and celebrities.

Los Angeles-based Connor Musarra created the now-suspended “Tesla Real” account that impersonated Tesla and tweeted out statements such as “BREAKING: A second Tesla has hit the World Trade Center.”

Many critics of Tesla and Elon Musk, including journalists and celebrities, lavished praise for those partaking in the chaos. Although parody accounts can be funny, if not properly identified, they could mislead, which is something Elon Musk has said isn’t okay.

In his own words, Musarra shared how he “impersonated” Tesla on Twitter in a video posted to TikTok.

“Twitter’s new system of blue checks for $8 allowed me to impersonate Tesla for, like, six or seven hours today. Yes, it was really me that did that,” he demonstrated what the account looked like before he switched it over and what it looked like when he got locked out.

Musarra credited Ken Klippenstein, a reporter for The Intercept, for helping the account get noticed.

“At first, I had no followers. I was just retweeting it from my other account and sending it to friends hoping they would retweet it. But then Ken Klippenstein retweeted it,” Musarro said in the video. Once he began to get noticed, Musarro, as Tesla Real, tweeted that this was a parody account.

Elon lies like he breathes and has the limitless greed of any billionaire, absolutely incredible that anyone believed he would change fuck all about twitter’s content moderation policies once advertisers started jumping ship

Although at some point, he added “parody” in the bio, Elon Musk announced that all verified users that were making parody accounts needed to have that clarification in both the username and bio. Musarra noted that he was unable to do so because once verified, he couldn’t change the name. He then began posting jokes about Tesla killing children, and building cars that catch on fire. He also made stock-related tweets.

In a second video, Musarra said that he wanted to create another account for SpaceX.

“I was gonna just spend eight more dollars and make another account maybe for SpaceX, but then I noticed they literally took away the Twitter Blue feature. You can’t even do that. The $8 blue check shit isn’t even a thing anymore. They took it away.”