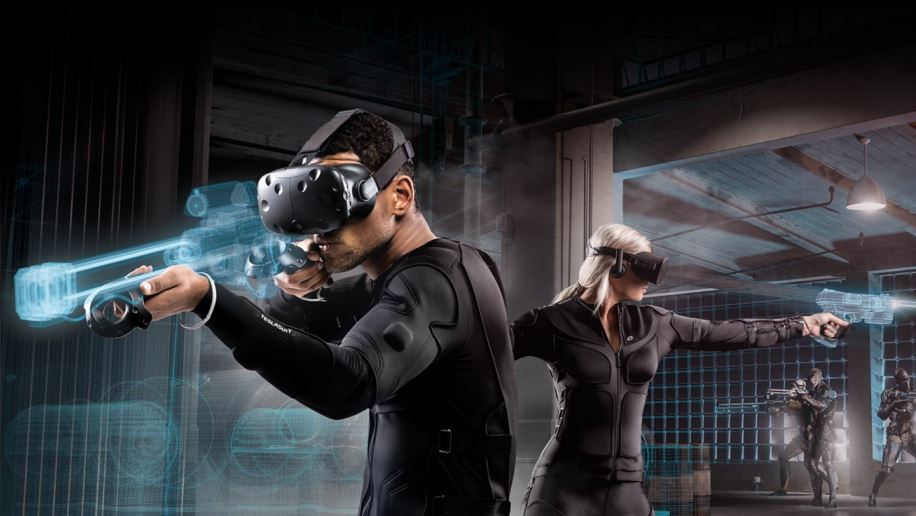 One of the innovative future technologies that was on display at this year’s Consumer Electronics Show (CES 2019) in Las Vegas is the Teslasuit, a full body virtual reality haptic suit that delivers real sensations to users that mimic the environment of a digital simulation or game. In a haptic feedback system, stimuli are used to provoke real sensations involving touch – shocks, punches, pushes, bumps, etc. Teslasuit combines this sort of environmental feedback along with climate control, motion capture, and biometric systems to give a fully responsive, immersive experience to the user. Combined with true-to-life virtual reality graphics, this device could finally provide the experience VR was intended to have since its development began.

The full-body sensations of the Teslasuit seem to indicate a new level of experience for virtual reality users, but the haptic capabilities aren’t the only things making it stand out. The suit’s biometric system is designed to use machine learning to analyze heart rate, stress levels, and overall mental and emotional states to create experiences catered to the user. How this capability will be implemented is really up to game developers, though. As data is gathered from biometrics, capabilities will follow. “This is very important for the gaming industry. We see that in the future, when we come to the end user market, that we will be able to offer a lot of data sensing for the developers to process, for the AI itself to adjust the game to the player,” Dimitri Mikhalchuk, co-founder of Teslasuit, explained in an interview with Digital Trends. The suit was first officially unveiled at CES 2018.

Teslasuit uses 68 channels embedded throughout the suit’s fabric to deliver electrical stimulations, and the company is working to expand on that number. Also included in the suit’s software is a haptic library, enabling game developers to create their own effects to correspond with their virtual worlds. The climate control system adjusts the temperature of the suit, heating and cooling in accordance with the virtual environment. Finally, its motion capture and avatar system track motions from the users entire body to interact with virtual environments (and built with multiple players in mind), something that’s more or less an expansion on the core of VR to begin with. 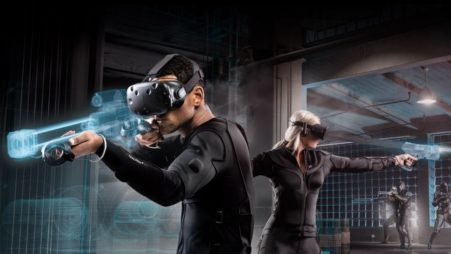 The haptic Teslasuit as imagined in a VR game environment. | Credit: Teslasuit 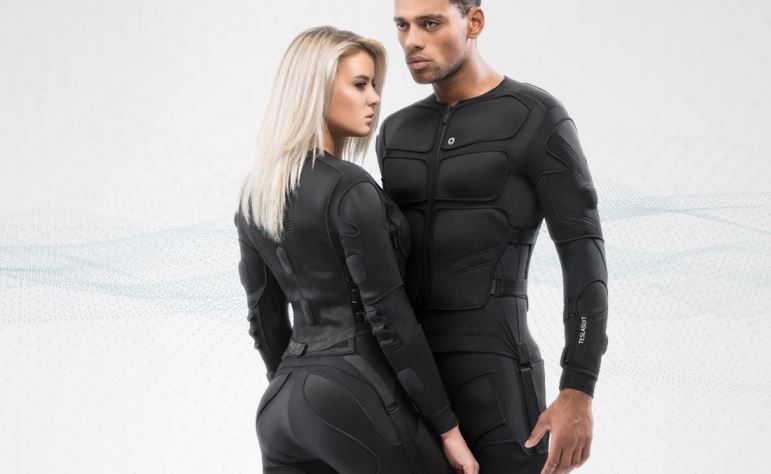 While the Teslasuit brings virtual worlds closer to a potentially action-packed reality, bruises are not part of the experience, according to Mikhalchuk. The electric stimulation is matched to the users own strength, adapting its responses to the input. In other words, the force a user “hits” with in a game is the amount of force used to “hit” back, i.e., electric pulses make the muscles contract within that range.

With the equivalent of a full body shocking device wrapped around players, the question of security arises, yet another thing Teslasuit has addressed in its design. Its software has military grade encryption (AES 256) built into its wireless control system to ensure users’ bodies are not (literally) hacked into. Among its many features, Teslasuit is also completely wireless, boasts a 10+ hour battery life, and is machine washable (important for sweat-inducing virtual scenarios and general funk from frequent wear). A summary of the device on the Teslasuit website reads like something from a science fiction movie:

A highly developed form of computer modeling allows an operator to immerse in the artificial world. The user can act directly in it with the help of special sensory devices that link movements with audio-visual effects. In this case, the user’s visual, auditory, tactile, and motor sensations are replaced by their imitation, generated by a computer system with full body haptic VR suit. At the same time, biometric system of the Teslasuit analyzes human performance and health (workforce and human performance analytics). – Teslasuit.io

The future of augmented reality and virtual reality applications have been explored in fictional storylines over the years with the most recent and directly relevant one being the haptic system imagined in the movie Ready Player One. The Battlestar Galactica prequel series “Caprica” also imagined an immersive virtual world that users could “feel” experiences in (or otherwise do things they wouldn’t/couldn’t in the real world), but that didn’t require a suit, just a mind. In an episode of Netflix’s Black Mirror series called “Playtest”, an American traveler in the UK signs up to demo an immersive VR horror game to earn some money. Unlike the Teslasuit, however, the experience in that episode involved an implant to the user’s neck called a “mushroom” which linked up the VR experience with a user’s brain. The Matrix also suggested an immersive environment, although people weren’t exactly voluntarily involved, if they ever knew it wasn’t real to begin with.

Other than gaming, Teslasuit is suggestive of several solutions for non-entertainment industries. According to an article on their company website, several VR-training solutions were available for demonstration at CES 2019: Astronaut VR-training in an ISS module, an oil-loading ramp operation VR-simulator, emergency evacuation VR-training, and a powerplant VR training simulator. Teslasuit is currently continuing its outreach and collaboration with game companies to develop content. Its software development kit and corresponding system tools and applications are included with the purchase of the suit which began shipping B2B in the third quarter of 2018.

Watch the below video for a first-hand review of Teslasuit: