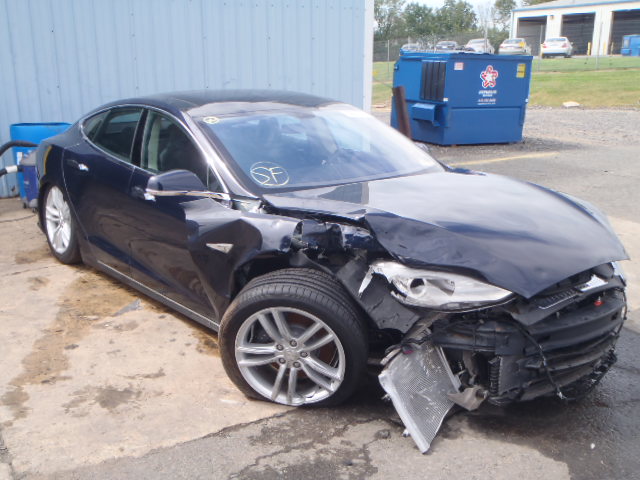 Peter Rutman of San Diego thought he landed a bargain when he purchased a salvaged 2012 Tesla Model S Signature for $50,000 at auction, but what he didn’t realize was that his efforts to put the car back on the road would present more hurdles than just repairing a simple $8,000 worth of parts.

The top of the line and limited-edition Signature series Model S was offered as a preorder for early adopters of the premium all-electric sedan. At nearly $120,000 when fully loaded the Model S comes in at nearly twice the price of other luxury sedans on the market thus adding a significant barrier of entry for many. Unless of course you can pick one up for less than half the original price?

Rutman saw an opportunity to get into the seat of a Model S at a deep discount by purchasing one with a salvaged title through an auction. He claims that repairing the vehicle into a visible working state was easy and came with a relatively low repair cost at only $8,000. However having Tesla Motors maker of the Model S activate the car’s onboard computer and allowing it to drive came with a whole different set of challenges – something that he’s been reluctant to address.

“The document they [Tesla Motors] wanted me to sign didn’t indicate they were going to do any repairs to the car, or get it up and running … They can take the car. They can keep it. They can do whatever they want with it.”

To provide further context, Tesla Motors is asking Rutman to sign a form that would authorize them to ensure the safety of the vehicle before allowing it to be placed back on public streets. We think there’s good cause behind this for many obvious reasons especially considering the vehicle was given a salvage title by an insurance company.

“Safety is Tesla’s top priority and it is a principle on which we refuse to compromise under any circumstance. Mr. Rutman purchased a vehicle on the salvage market that had been substantially damaged in a serious accident. We have strong concerns about this car being safe for the road, but we have been prevented from inspecting the vehicle because Mr. Rutman refused to sign an inspection authorization form. That form clearly states that in order for us to support the vehicle on an ongoing basis, we need to ensure the repairs meet minimum safety standards. Regardless of whether or not the car passed inspection, Mr. Rutman would have been free to decide where to conduct any additional repairs and to leave with his vehicle. There was never any threat to take away his vehicle at the inspection or any time thereafter and there is nothing in the authorization form that states or implies that we would do so. Additionally, Mr. Rutman opted to have his vehicle repaired by a non-Tesla affiliated facility. We work with a network of authorized independent repair facilities to ensure our safety standards are met. It is also worth noting that Mr. Rutman is not on any “blacklist” for purchasing Tesla parts. While we do sell certain parts over the counter, we do not sell any parts that require specific training to install. This is a policy that is common among automakers and it is in place to protect customers from the risk of repairs not meeting our safety standards.”