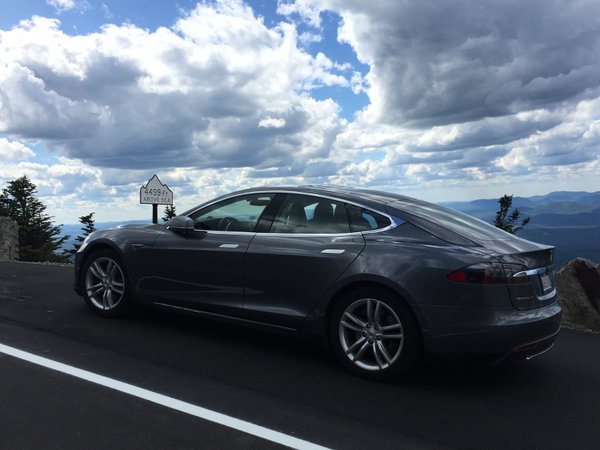 Part of my justification for purchasing a Tesla Model S was because my daily driver an Acura MDX SUV was at 190,000 miles and was soon to become the starter car for my daughter that was about to turn of driving age. As an electric vehicle (EV) convert who’s logged nearly 50,000 miles of emissions free driving, and watching my child experience the tribulations with driving a gasoline powered internal combustion engine (ICE) car, I’ve come up with my top 5 reasons why my child’s next car will be an EV.

As EV drivers we inevitably morph into these sensitive creatures revolted by the sheer visualization of exhaust fumes spewing from ICE cars, which is still more common place than not. It’s not a character trait that you consciously make an effort to adopt, but rather you’re so far removed from any exposure to emissions when driving electric, that you often lose sight of the fact that there’s even such a thing as poisonous gas spewing freely into the atmosphere. Therefore your Spidey senses are on high alert when you do come across it.

Kids on the other hand are seeing the world of cars for the first time. They pay very little attention to anything other than their mission to get from point A to point B. How to fill the car with gas, what things, whether inanimate or not, to look out for, etc. all come as an afterthought.

This week my daughter scared the heck out of me when she went out to the garage to warm up the car before heading to school. I was in the process of putting some things away in the house so I didn’t come into the garage until 5-10 minutes later, but when I finally did, I could hardly breathe. My daughter was sitting in the big SUV while the engine was running and with all the garage doors closed. I immediately opened all the doors to ventilate the space and counted my blessings. Thankfully she was fine but it sure made for a frightening experience.

When I spoke to her about it, she said, “But Dad, you have your car running in the garage all the time without the doors open.” It’s true, I do. I fiddle with with my car for blog posts or just for fun, I clean it with the music running, and generally don’t worry about emissions. She’s been watching me this entire time and figured she could do the same. Needless to say, we had a long chat about the dangers of poisonous fumes that gets emitted as a byproduct of gasoline burning engines.

4. ICE cars burn fossil fuels which can be dangerous to handle

The big SUV gets a measly 20 mpg and with my daughter’s commute to school and after school activities, she’s hitting the gas stations quite a bit.

Here in the wonderful state of Massachusetts you have to pump your own gas at most gas stations. My daughter hadn’t experienced pumping gas before and had no idea where gas goes or where the process of filling flammable liquid into the vehicle even begins. That may sound strange to some, but the fact of the matter is, she hasn’t seen me use a gas station in over 18 months, and literally had no point of reference for the procedure. I showed her the process of squeezing a trigger on a pump that would allow the flow of gasoline into the car’s gas tank. And like any teenager these days when encountered with a 20 second lapse of inactivity, she pulled out her cell phone to see what’s going on in her digital life. That concerned me.

I know there’s little chance that a cell phone may spark an explosion, but it’s still not recommended to be using electronics while you’re surrounded by highly flammable liquids. I went on to explain that gas fumes can ignite through sparks and that electronics could be a catalyst to it. And of course, like any good Dad, I had to warn her that she could blow herself up. She reluctantly put the phone away.

As we finished filling up the gas tank and began hanging the nozzle back on the pump, a trail of gas dripped across the car and to the ground. I told her that this stuff was not only bad for the environment, bad for the car’s paint, but also that it’s carcinogenic and bad for your health. At that point I think she started to understand that ownership of an ICE car could be dangerous, even when not started.

Since my daughter will be driving the car very regularly and logging a good amount of miles on it, she will need to maintain a regular service interval. The Acura has a service indicator that lights up when it’s time for service.

The “A” service light indicates that an oil change is needed while the “B” service light represents the need for an oil change plus a tire rotation. There are additional indicators to alert you of more major services such as belt changes, fluid flushes and transmission plus brake maintenance. My daughter was not thrilled by the mention of the type of services needed, likely because it was going to be a real inconvenience to maintain it, but also because there will be costs associated with each type of service. Once again this was new to her since we never experienced such a thing in the Model S.

2. ICE cars are expensive to drive

In addition to having to pay for costly services, filling up the Acura costs $55. Since that’s about a week’s worth of after school part-time pay, I’ll be paying for gas that’s needed to get her to school, sports practice and her other commitments. However I made it clear that trips to the mall were going to be on her dime.

Although gas prices have dropped recently and electricity is still crazy expensive in my area, driving an EV is still 1/3 to 1/5 the cost of an ICE car for the same distance travelled. And that doesn’t take into account the extra service and maintenance costs associated with owning a gas car. Our trusty old Acura SUV is safe and reliable but at 20MPG it isn’t all that efficient.

1. ICE cars need to be turned on and off

After 18 months of living with the Tesla Model S, the entire family has gotten used to pulling into a parking spot and walking away while the car takes care of shutting itself down and locking up. I’m sure every Model S owner can relate.

While my daughter hasn’t been driving my Model S, she’s been watching and learning from my behaviors since day one. I never use a key, I never lock and unlock the door, and probably the most obvious difference is that I never turn off the car. For that reason, there’s been several times during her early days of driving where she would just get out of the car and forget to turn off the engine, or lock the car. Usually one of us remembers before we get too far, but it’s crazy how quickly you become accustomed to a certain way of life.

As the automotive industry continues to shift towards plug-in hybrids and battery electric vehicles, not to mention introduce technologies where vehicles can drive themselves, there’s still a world of education that needs to be had before people eventually transition from the old ICE-age into this new form of transportation. But for now, I’ll start with my daughter.