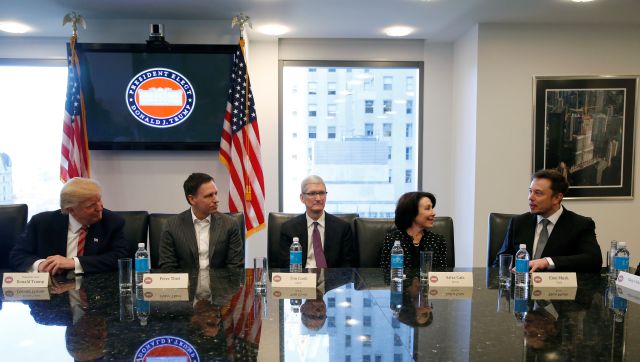 Yesterday’s meeting of the most influential technology leaders and the Trump transition team focused on several topics related to our national economy and its intersection with the technology sector.

YouTube featured a 3-minute or so live stream of Trump’s welcome to his top tier technology guests. The tension was palpable, as many present had not supported a Trump 2016 Presidential bid and now foresee less technology sector spending with Trump in the White House. Moreover, according to Andrew Bartels, a Forrester principal analyst, recent Trump appointments, such as cabinet secretaries, “are explicitly hostile to the mission of their agencies.” With a Trump administration leading the country, Forrester Research has cut back its growth estimate for the U.S. tech market in 2017 to 4.3 percent from 5.1 percent.

The individuals present often held dichotomous views on issues like net neutrality, dissemination of fake news, censorship, and antitrust issues. For example, the president-elect’s vocal stance on immigration, which could limit H1-B skilled worker visas as part of a clampdown on cheaper foreign labor, could create difficulties for companies like Facebook and Microsoft, as a change in their hiring practices would elevate their expenditures and affect their overall profitability.

Conversely, areas of agreement for the group of tech entrepreneurs were corporate tax cuts and repatriation of capital being held abroad, reports CBS News.

One topic at the 90-minute meeting between Trump and the tech CEOs was how to create a U.S. economy with home-grown and high-paying jobs. IBM CEO Ginni Rommety recently wrote an op-ed piece in USA Today discussing their company plans to hire 25,000 people in the U.S. and invest $1 billion over the next four years in “new collar” jobs via employee vocational training. “We are hiring because the nature of work is evolving – and that is also why so many of these jobs remain hard to fill.”

That “evolving” workforce demands new training, which was another important topic of conversation at the Trump tech summit. The U.S. workforce will require employees with skills that are relevant to jobs such as cloud computing technicians and services delivery specialists.

This focus on becoming a reflexive workforce was contained in remarks that Jeff Bezos of Amazon later issued. In a statement, he related how he “shared the view that the administration should make innovation one of its key pillars, which would create a huge number of jobs across the whole country, in all sectors, not just tech — agriculture, infrastructure, manufacturing — everywhere.”

That innovation will be crucial to obtain one Trump administration goal of higher pay across U.S. jobs, as the Bureau of Labor Statistics found that the area of highest job creation at the end of 2015 was home health aides, who earn less than $25,000 per year. That barely exceeds the U.S. poverty level for a family of four.

“This is a truly amazing group of people,” the president-­elect said in a conciliatory gesture. “There’s nobody like you in the world. In the world! There’s nobody like the people in this room.” The tech leaders smiled politely at the president-elect, recognizing that the tech summit could provide a boost to big-cap technology stocks, which have lagged in an otherwise surprisingly robust post-election rally.