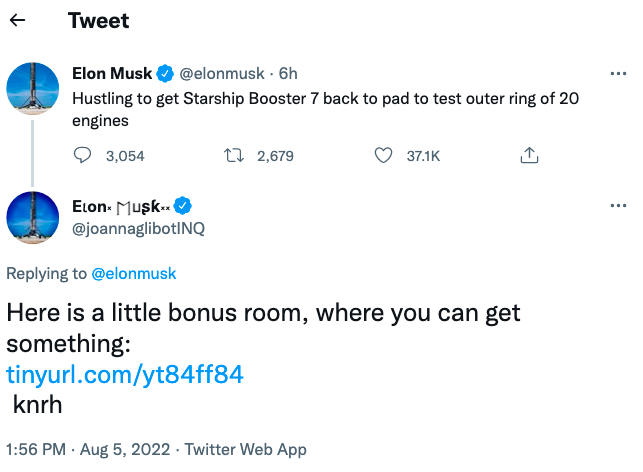 The back and forth between Twitter and Elon Musk continue. And still, bots and spam continue to be problematic for Twitter users. There are still verified accounts impersonating Elon Musk and promoting crypto scams.

Twitter subpoenaed Tesla for all of its documents and communication related to Elon Musk’s bid to buy the social network. The new subpoena was filed on August 2nd and Twitter has a total of 27 requests for Tesla.

The CEO’s attorneys argued that Twitter’s “misrepresentations or omissions” distorted its value which caused Elon Musk to agree in April to purchase it at an inflated price. The attorneys noted that Twitter’s own disclosures revealed that it had 64 million fewer “monetizable daily active users,” that can be shown digital ads than the initial 238 million Twitter claimed.

Earlier today, Andrea Stroppa shared another thread with details from Elon Musk’s suit against Twitter. In May, Andrea estimated that false, spam or automated accounts could represent 12-14% of Twitter’s then mDAU, which is the key metric for Twitter’s business revenue and market value according to its SEC filings.

For years, most researchers affirmed that Twitter's estimates about its spam and fake accounts were inaccurate. Nobody cared. But now @elonmusk opened Pandora's box, and there is still a story to write.

Spam and bots getting worse.

According to an article by POC Network, the author noted that Twitter’s spam and bot issues are getting worse.

“It has gotten to the point that close to half of my colleagues have decided to close (or “deactivate”) their Twitter accounts. All due to the fact that it just wasn’t worth the constant bombardment of spam they would get within their notification screen.”

In response to Elon Musk’s recent tweet today about hustling to get the Starship Booster 7 back to its pad to test the outer ring of 20 engines, I saw several of the usual crypto spam accounts. Some were even verified impersonators of Elon Musk himself.

How do the bot and spam usage on Twitter look to you? Are you seeing an increase? For me, it’s been about the same but I am also kind of used to them. I have seen the increase in spam replies when Elon Musk tweets.

What are your thoughts?