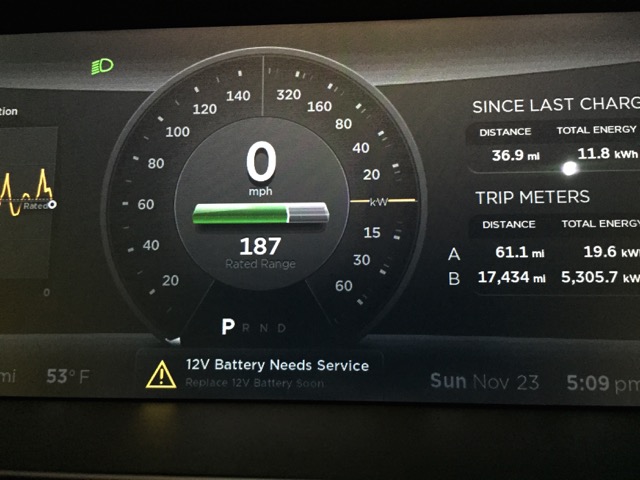 During the time when I was sitting on the sideline waiting patiently for delivery of my Model S, I read up on pretty much anything and everything related to the vehicle. I remember reading about 12V battery failures on the Model S, something Elon himself even commented on during one of the earnings calls.

It was reported that Tesla had chosen a poor vendor for the 12V battery which impacted early Model S owners but apparently this issue is still happening across later production vehicles. My Model S as well as several others that I personally know of received the 12V battery service indicator. For me this took place after 7 months and 18,000 miles of ownership.

Purpose of the Tesla 12V battery The 12V battery in the Model S performs many of the same duties as it would in any internal combustion engine (ICE) car.The connections to the 12V battery on a Model S appear to be a bit more complex than in a traditional ICE as seen in the following picture (source: TMC forum).

RELATED: Why Tesla’s lead acid 12V battery needs to be lithium-ion based

The 12V battery maintains power for critical systems when the main battery pack is damaged or disabled. It powers the hazard lights, airbags, door locking and unlocking operations, as well as other critical componets of the Model S. The 12V battery also ensures that electronics are “awake” and listening to the key FOB in order to automatically lock and unlock the vehicle based on proximity. It also allows the car to maintain its 3G connection for remote access when the rest of the vehicle is powered off. If the 12V battery happens to fail, it will isolate the main battery pack from the car and prevent charging. This is a safety feature of the Model S designed to help protect first responders in the event of an accident.

What does my warning mean?

The “12V Battery Needs Service” warning can indicate a number of problems and the only way to truly understand the reason for the alert is to call Tesla Service (they’re available 24×7) and have them pull the logs. This is something that Tesla service can diagnose remotely. In severe cases Tesla Service will tell you to stop driving the car, but generally it’s an indication that the voltage level has dropped below a certain threshold but the vehicle can continue to operate normally until replaced. In the rare event that the the 12V battery dies while driving, the car will become disabled and will require a jump start to power on again. Our friend Kman has a good video on getting access to the terminals behind the nosecone to jump start the 12V, but please consult Tesla service and take caution before attempting this on your own.

Depending on the severity of the issue, there may be a 2-3 week lead time before Tesla Service replaces the 12V battery.

Many owners manage to get the battery replaced quickly, but in my case a busy Tesla Service Center combined with the fact that it was Thanksgiving holiday during a snowy New England week, had me driving with the warning light on for almost 2 weeks (about 1,000 miles) without encountering any issues.

Another interesting point to note is that Tesla may call you before you even see 12V battery service warning. Multiple owners have reported this proactive stance in advance of a warning which is great to see. Evidently Tesla’s early warning threshold is supersedes the trigger that kicks off the dash indicator.

Why are the 12V batteries failing?

Some owners are on their 3rd 12V battery already. Many others are reporting failures at the 1 year mark. In ICE cars you can normally expect about 4 years of life before needing to replace the 12V battery which begs the question – why are Tesla 12V batteries failing?

Some of the failures have been in the DC to DC converter that charges the 12V battery through the main battery pack. That converter can be seen as an equivalent to the alternator in your traditional ICE car. However, this doesn’t seem to be the main cause of the 12V battery failures. Current conjecture is that vampire load and the excessive strain on the 12V are causing the reliability issues.

Tesla may have a lingering design issue in their use of the 12V battery.

From my reading, I think they upgraded the quality of the battery in the earlier models but we’re still facing the same underlying design issue in the way the 12V is stressed. Can Tesla fix the way the 12V battery is used with software updates alone? We don’t know, but fortunately they’re taking care of all of the replacements in the meantime. Unless they can address it remotely via software updates, there could be a factory “recall” brewing (and I use this term loosely).

Either way, Tesla should be more upfront about these issues and let owners know what they’re doing to address the underlying problem.

Getting the 12V battery serviced

From everthing I’ve heard and experienced through my own Model S, the replacement including labor and parts is 100% covered by Tesla.

Tesla Service can handle the replacement at your location, but given the poor weather conditions here in New England, I opted to have them pick up my Model S and do the replacement in the comfort of their own Service Center. They were able to service it within the same day, and to Tesla fashion they also updated/fixed a bunch of other minor things for free, while at it.

The 12V battery is a relatively inexpensive part in the Model S and is fairly simple to replace, but the bigger concern is why they seem to be failing so quickly. It isn’t a major issue for now but certianly something we should continue monitoring as concerned Model S owners.

I’ve started a poll over on TMC to see what kind of failure rate we’re seeing on the 12V battery so feel free to contribute to it or use it as a way monitor progress. So far over 75% of respondents have had their 12V battery replaced within 2 years.