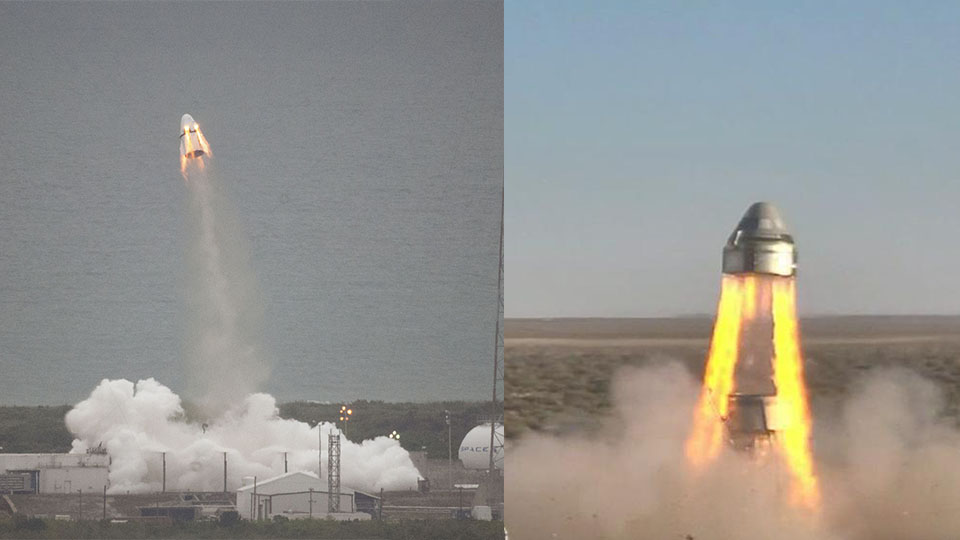 On November 4th, Boeing completed a crucial pad abort test of its reusable Starliner spacecraft, successful in spite of an unintentional partial failure of its parachute recovery system. Three days later, Boeing revealed what it believed to be the cause of that anomaly in a November 7th press conference.

Meanwhile, SpaceX – having completed Crew Dragon’s pad abort test in 2015 – is preparing for an equally important In-Flight Abort (IFA) test and is perhaps just a day or two away from static firing the Crew Dragon capsule assigned to the test flight.

According to a NASA press release after the test, it “was designed to verify [that] each of Starliner’s systems will function not only separately, but in concert, to protect astronauts by carrying them safely away from the launch pad in the unlikely event of an emergency prior to liftoff.” Although the test wasn’t without flaws, the pad abort test successfully demonstrated the ability of the four launch abort engines and control thrusters to safely extricate astronauts from a failing rocket.

Those theoretical astronauts would have almost certainly survived the ordeal unharmed despite the failed deployment of one of Starliner’s three main parachutes, testing the spacecraft’s abort capabilities and redundancy quite a bit more thoroughly than Boeing intended. To put it bluntly, Boeing’s above tweet and PR claim that the failed deployment of 1/3 parachutes is “acceptable for the test parameters and crew safety” is an aggressive spin on a partial failure that NASA undoubtedly did not sign off on.

Boeing and SpaceX have both suffered failures while testing parachutes, leading NASA to require significantly more testing. However, in a November 7th press conference, Boeing revealed that Starliner’s parachute anomaly wasn’t the result of hardware failing unexpectedly under planned circumstances, but rather a consequence of a lack of quality assurance that failed to catch a major human error. Boeing says that a critical mechanical linkage (a pin) was improperly installed by a technician and then not verified prior to launch, causing one of Starliner’s three drogue chutes to simply detach from the spacecraft instead of deploying its respective main parachute.

Space is Parachutes are hard

Parachutes have been a major area of concern for the Commercial Crew Program. Both SpaceX and Boeing have now suffered failures during testing and have since been required to perform a range of additional tests to verify that upgraded and improved parachutes are ready to reliably return NASA astronauts to Earth. Although the Starliner pad abort test did indeed demonstrate the ability to land the capsule safely under two main chutes, an inadvertent test of redundancy, the series of Boeing actions that lead to the failure will almost certainly be scrutinized by NASA to avoid reoccurrences.

Boeing believes that the parachute failure won’t delay the launch of Starliner’s Orbital Flight Test (OFT), currently targeting a launch no earlier than (NET) December 17th. However, it can be said with some certainty that it will delay Starliner’s crewed launch debut (CFT), at least until Boeing can prove to NASA that it has corrected the fault(s) that allowed it to happen. SpaceX is similarly working to qualify upgraded Crew Dragon parachutes for astronaut launches, although the company has thus far only suffered anomalies related to the structural failure of parachute rigging/seams/fabric.

SpaceX has made alterations to the SuperDraco engines to prevent a failure mode that abruptly reared its head in April 2019, when a leaky valve and faulty design resulted in a catastrophic explosion milliseconds before a SuperDraco static fire test. Prior to its near-total destruction, Crew Dragon capsule C201 was assigned to SpaceX’s In-Flight Abort test, and its loss (and the subsequent failure investigation) delayed the test’s launch by at least six months. Crew Dragon’s design has since been fixed by replacing reusable check valves with single-use burst discs, nominally preventing propellant or oxidizer leaks.

If capsule C205’s static fire testing – scheduled no earlier than November 9th – goes as planned, SpaceX may be able to launch Crew Dragon’s in-flight abort (IFA) test before the end of 2019e. Likely to be a bit of a spectacle, Crew Dragon will launch atop a flight-proven Falcon 9 booster and a second stage with a mass simulator in place of its Merlin Vacuum engine, both of which will almost certainly be destroyed when Dragon departs the rocket during peak aerodynamic pressure.

NASA made in-flight abort tests an optional step for its Commercial Crew providers and Boeing decided to perform a pad abort only and rely on modeling and simulations to verify that Starliner’s in-flight abort safety. Assuming that NASA is happy with the results of Starliner’s pad abort and Boeing can alleviate concerns about the parachute anomaly suffered during the test, Starliner’s uncrewed orbital flight test (OFT) could launch as early as December 17th. Starliner’s crewed flight test (CFT) could occur some 3-6 months after that if all goes as planned during the OFT.

If SpaceX’s In-Flight Abort (IFA) also goes as planned and NASA is content with the results, Crew Dragon could be ready for its crewed launch debut (Demo-2) as early as February or March 2020.