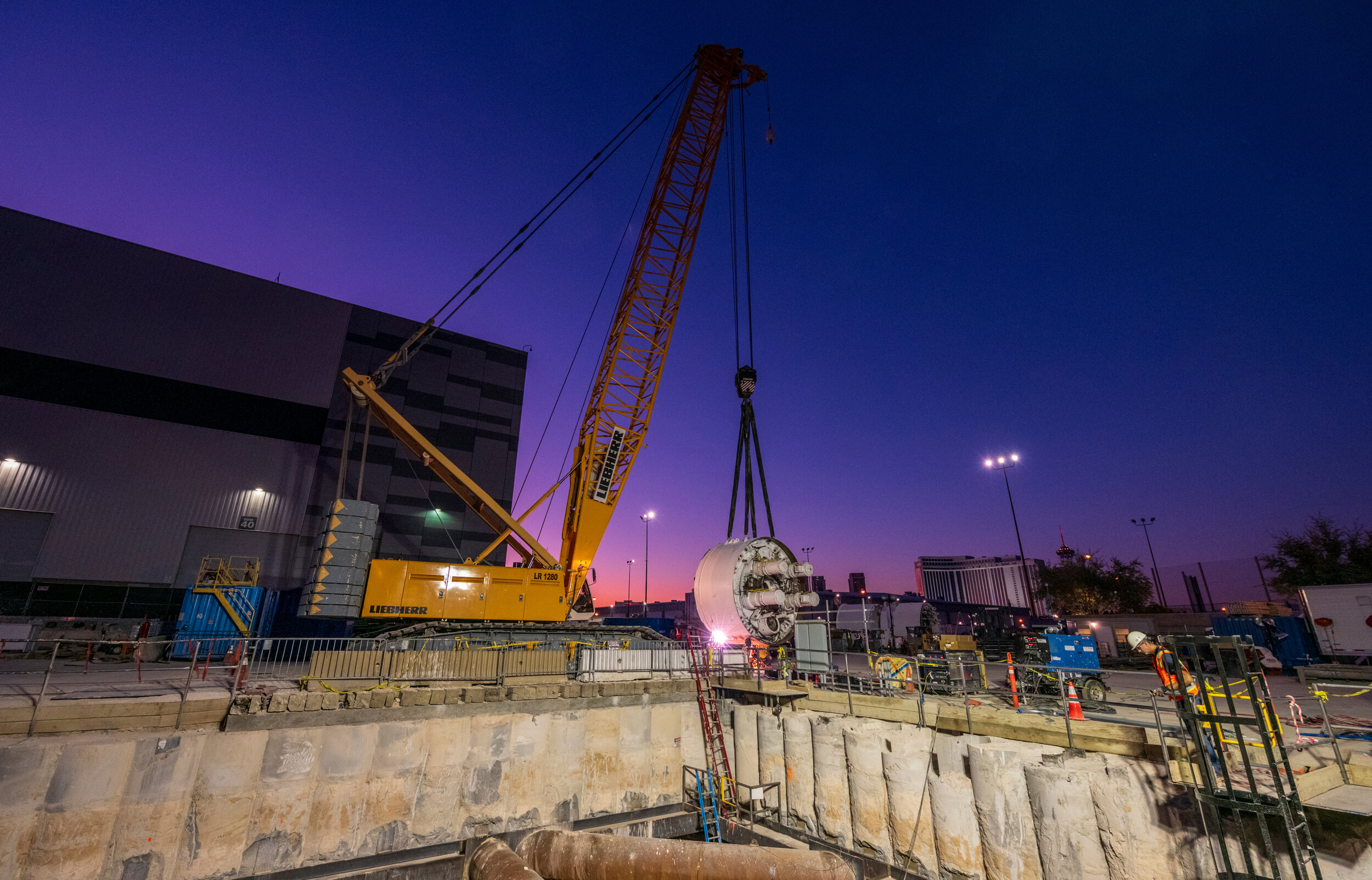 The Boring Company prepares to lower the drill head for the People Mover tunnel which will connect convention halls as part of the LVCCD Phase 2 construction in the Red Lot east of the south Hall at the Las Vegas Convention center on Monday, Oct. 28, 2019. (Mark Damon/Las Vegas News Bureau)

The Boring Company’s Las Vegas Convention Center Loop is nearing its completion, and with it comes the emergence of Elon Musk critics arguing that the tunneling startup’s efforts are practically useless. Over the past months, the LVCC Loop has received varying degrees of skepticism and mockery that are very reminiscent of the criticisms that have been thrown at Tesla and SpaceX on a consistent basis.

A look at the comments of a video showcasing the theoretical capacity of the LVCC Loop would show this. While a good number of responses expressed some open-mindedness about the tunneling startup’s public transportation project, comments mocking the company for just building a subway or a train system are abounding. Criticism about the Loop system being “tunnels for the rich” have also been expressed.

Inasmuch as these arguments may be compelling to some, the arguments, especially those about the Loop system being a way for Elon Musk to get more money to line his pockets, do not really hold water. This argument is debunked by a simple look into Elon Musk’s other businesses, SpaceX and Tesla, and the strategy that he has employed so far.

Simply put, if Musk were only focused on gaining as much money as he can, SpaceX launches would not be among the cheapest in the industry. Crew Dragon flights would definitely not be as affordable as they are now. The Dragon capsule is far more modern than Russia’s Soyuz capsule but it’s less expensive in price. What does this mean? Perhaps for Musk, it’s not just about making as much money as possible.

This point is highlighted by Tesla in its Q3 earnings call, with Musk and CFO Zachary Kirkhorn emphasizing that the company’s production savings are usually passed on to customers. The prices of the Model S over the years prove this. The Model S Long Range Plus variant now costs $69,420 to start. That’s a great value for a fairly large vehicle with over 400 miles of range, tons of storage, and impressive performance, somewhat dated design notwithstanding.

The same thing is true with Teslas as a whole. Teslas are still expensive, but comparable vehicles are more expensive for what they offer. The Plaid Model S may cost about $140K, but the Taycan Turbo S, arguably the best that legacy auto has to offer, starts at about $180K. Cheaper EVs like the Hongguang MINI EV in China may be far more affordable, but they offer very little tech. GM’s MINI EV has outsold the Model 3 in China, but that’s a bare-bones electric car that doesn’t even have airbags. Ultimately, when it comes to rival vehicles with comparable specs like the Xpeng P7, Tesla’s cars like the Model 3 are still bang-for-your-buck.

If there’s anything about products and services that Musk develops with his team, it is the fact that they are relatively cheap to maintain. SpaceX’s rockets can get refurbished at a pretty good cost, allowing the company to be even more aggressive with its launch pricing. Tesla’s cars are cheaper to maintain than comparable gas or diesel-powered vehicles. The Boring Company’s Loop systems will likely be the same way—simple and affordable to maintain.

Pair this with the fact that Musk does not seem to be focused solely on squeezing as much profit from every customer and it seems that the Loop system is bound to be quite affordable when it does get released. The Boring Company notes that rides in the Loop would be less than half of the price of a regular taxi ride. That’s a great start, and it would likely be improved even further as the tunneling startup optimizes its operations over time.

The Boring Company’s tunnels, thanks to the company’s use of smaller tunnel boring machines and all-electric people-movers, are dirt-cheap compared to traditional tunnels such as those used in subway systems. Ultimately, these tunneling innovations are where the true disruption of the Boring Company lies. The Boring Company can build tunnels faster and cheaper—and that, ultimately, is why in the case of the Las Vegas Convention Center Loop, it wouldn’t really be as smart or innovative to “just build a train.”