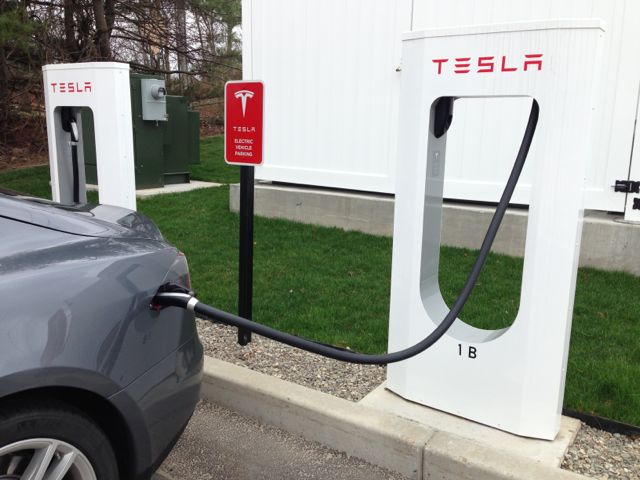 When you fill up a normal ICE car you know exactly what your costs are for the fuel. With an electric vehicle it is not that simple. There is a charging efficiency factor that comes into play which means that the reported amount of energy used could be understated and lower than the actual energy used. In a previous post I wrote about installing an EKM Digital Submeter on my NEMA 14-50 outlet to measure actual power usage of the Model S against the reported power displayed on the driver’s digital dash display. A month later and armed with more data, the energy loss I’m seeing is larger than I had originally expected.

I charge at home 99% of the time and in the last three months I’ve logged 7,500+ miles driven, one trip to the Supercharger and two visits to the Tesla store’s High Power Wall Connector. I have a professionally installed NEMA 14-50 outlet at home. I’m using the factory supplied Universal Mobile Connector (UMC) as the cable between the outlet and the car. An EKM digital sub meter measures actual draw from the outlet and is accurate to within 1% and does not add any measurable load of its own.

On the “anniversary date” of taking delivery of my Model S I recorded all of the pertinent info that was displayed before resetting the Trip A meter. Before driving the next day I record the reading on the EKM meter. That way I’ve got the mileage and the Tesla reported power usage over the period driven. This process will let me see a bunch of information that I plan on tracking over time, as follows:

I plan on using this information to look at how average energy used changes as the months/temperature changes and perhaps as the Model S gets more miles on it. While I don’t drive consistently on any given day (test drives, special trips and the like), the numbers will average out and my driving style is not likely to change much after 30 years of driving (yeah I’m getting old but the Model S makes me feel young again!). I also drive pretty consistent patterns of commuting with a lot of miles to the same places which helps average out the special trips to locations with different terrain/conditions. Basically, while the conditions aren’t perfectly stable over time, the averages and data from this real world testing will be pretty accurate.

The last period (6/21 – 7/21) was my first full period with both the car and the EKM meter. A month of driving and charging, especially with the miles and kWh’s involved is a decent period over which to look at the results versus the 2 days from my prior blog post. Here’s the data: In the above table you can see that the Model S reported 728 kWh used during the period but the meter reported 894 kWh used. This means my charging efficiency is only about 82% and electric usage (and cost) is 23% higher than I may have expected based on the readings the Model S provides. For that month this is an extra $26 of charging cost which is a small number but a notable percentage of the total. The good news is that even using this larger kWh number, the savings versus driving my old ICE car for energy alone comes in at $334 — I’m saving $334/month in gas driving my Model S!