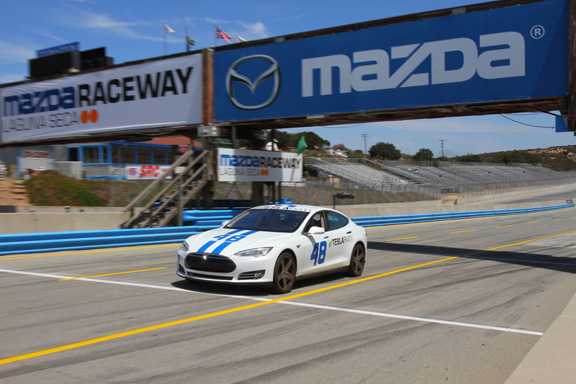 Our 48 Tesla has finished 2nd at Laguna Seca in an EV time trial (TT) competition among 24 Model S and Tesla Roadster in the Production GT group.

The competition was organized by Speed Ventures through the annual REFUEL event at world famous Laguna Seca Raceway. We clocked in a best lap time of 1:53, four seconds shy of Joe Nuxoll, former Tesla Motors employee and Tesla track-record holder, who registered an impressive 1:49 in a Tesla Roadster. Joe is an amazing driver with twenty five years of professional racing experience and we can certainly learn from the techniques, some EV specific, that he uses to maneuver through this difficult track. We will work hard on improving our skills and look forward to the challenge at next year’s event. The Laguna Seca road course is located in beautiful Monterey County in Northern California and one of the most renown and recognizable tracks in the world. The track itself is challenging and similar to Sonoma Raceway in terms of track difficulty. Similar to Sonoma, Laguna Seca has walls and sand traps, both of which could lead to some bad consequences if you ventured off the track. The corkscrew is perhaps the most famous turn that the track is known for, with very sharp turns and drop in elevation, to a point where you can’t actually see the middle of the turn. You learn to navigate through feeling and use of an oak tree as your marker as you keep your wits through it all.

This is not the best track for the Tesla Model S. Power limitation due to overheating was rather severe, to a point where it would not even accelerate uphill at full throttle after turn 6. The track is very heavy on braking as well. We have never seen the brakes get so hot on any other track before and will likely consider racing brake fluid next time.

We reached a top speed of 113 mph on the front straightaway, but we feel that we can improve upon that with more experience. The last part of the straightaway before the hairpin turn is downhill and unwinding slightly, so losing control in that section is quite easy and can be disastrous at that speed (remember, walls). Max lateral G was 1.1 throughout various turns. We found that following correct racing lines produces much better lap times and much less stress on the car than on most other tracks, and turning in just a couple of feet sooner makes a difference between a great turn and a bad one. The issue of steering wheel lock up at 1 lateral G happened again. Thanks to the Tesla Motors staff who were present at the track, we were able to find out that it’s indeed a known issue, although very few people would experience the effect unless driven hard on a race track. We were told that the fix would require steering recalibration which should just be a firmware update, but as imagined, it’s certainly not on Tesla’s priority list.

Tire pressure on our BFGoodrich g-Force Rival tires were 36 psi hot (approx. 29 psi cold). Although looking at the pictures below, it looks scary how compressed they get trough some of the turns.

First lap in the video is of the Time Trial. Subsequent laps are with Speed Ventures Green group and REFUEL. The track was heavy on power consumption, a little higher than usual, probably due to significant elevation changes. Power consumption was 1350 watts/mile. While on most tracks we used 4 rated miles per 1 actual mile driven, on this track it ended up being 5.5 rated miles per 1 actual mile driven. It also explains why power limitation was more severe.

Due to the Tesla user conference participation in the event (TMC Connect ), we had a royal treat with temporary Tesla Superchargers installed at the track. For the first time, we did not have to conserve power nor carefully plan for how many laps could be run. The supercharger was able to replenish the power from track use in about 20-30 minutes. It made us feel very spoiled. Thank you Tesla !