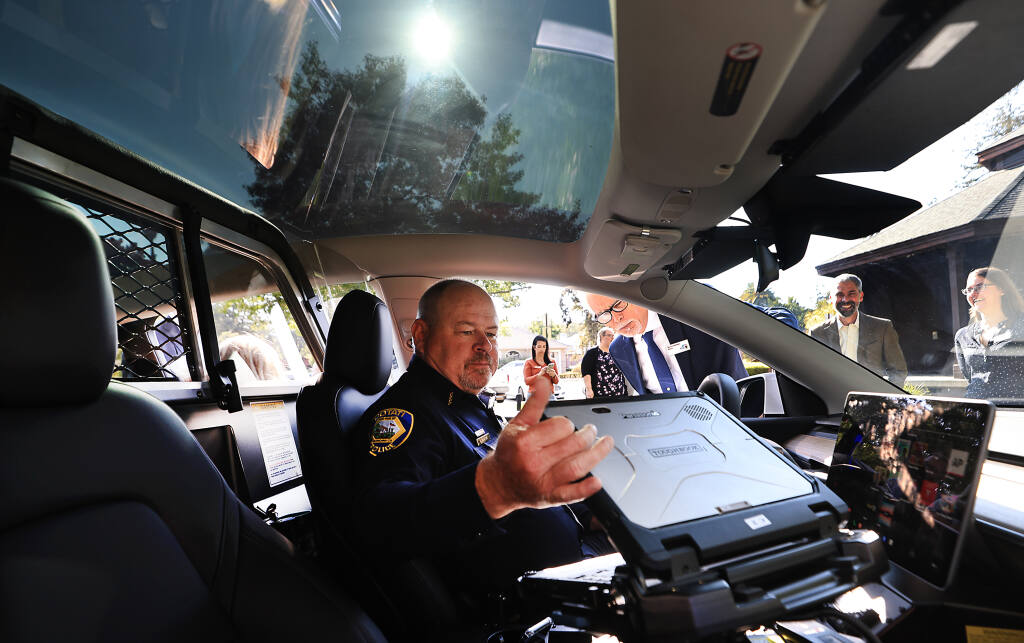 “Cotati is one of the first cities in California to put a fully equipped electric police patrol car into service.”

“Our police fleet was an obvious place to prioritize, as these vehicles idle and drive extensively, with an overall efficiency of 9 miles per gallon. Even with the higher initial costs of purchasing the car, it’s less expensive overall with gas and maintenance savings.”

“We are happy to help lead the way to a healthier gas-free future with electric patrol cars that refuel on electricity from Sonoma Clean Power Evergreen that saves our residents money over the life of the vehicle.”

The Tesla Model Y police vehicle was manufactured at the Tesla factory in Fremont and showcased at an unveiling yesterday in a ceremony at La Plaza Park. Mayor Landman said that the new police vehicle will “be more cost-effective, saving our citizens money while at the same time helping reduce (greenhouse gas) emissions — something we all recognize we need to do.”

The City of Cotati became the second Bay Area police department to add an EV to its fleet and the new EV will be the city’s 10th patrol unit, the Press Democrat reported. Cotati Police Chief, Michael Parish said that the goal is to be 100% electric during a speech at the presentation.

Cotati’s city leaders noted that Tesla’s higher upfront cost, which is around $56,000 compared with $35,00 for the all-wheel drive Dodge Charger, will prove to pay for itself over time with fuel savings and no cost for maintenance.

Mayor Landman also hopes to inspire other law enforcement agencies in his county to electrify their fleets.

“Once Sonoma County makes this switch, we can make the same friendly challenge to Mendocino and Marin, and, once that happens, we can all together watch this take off like a rocket throughout our state.”

Teslarati reached out to city officials for a comment and will update this article when we receive one.