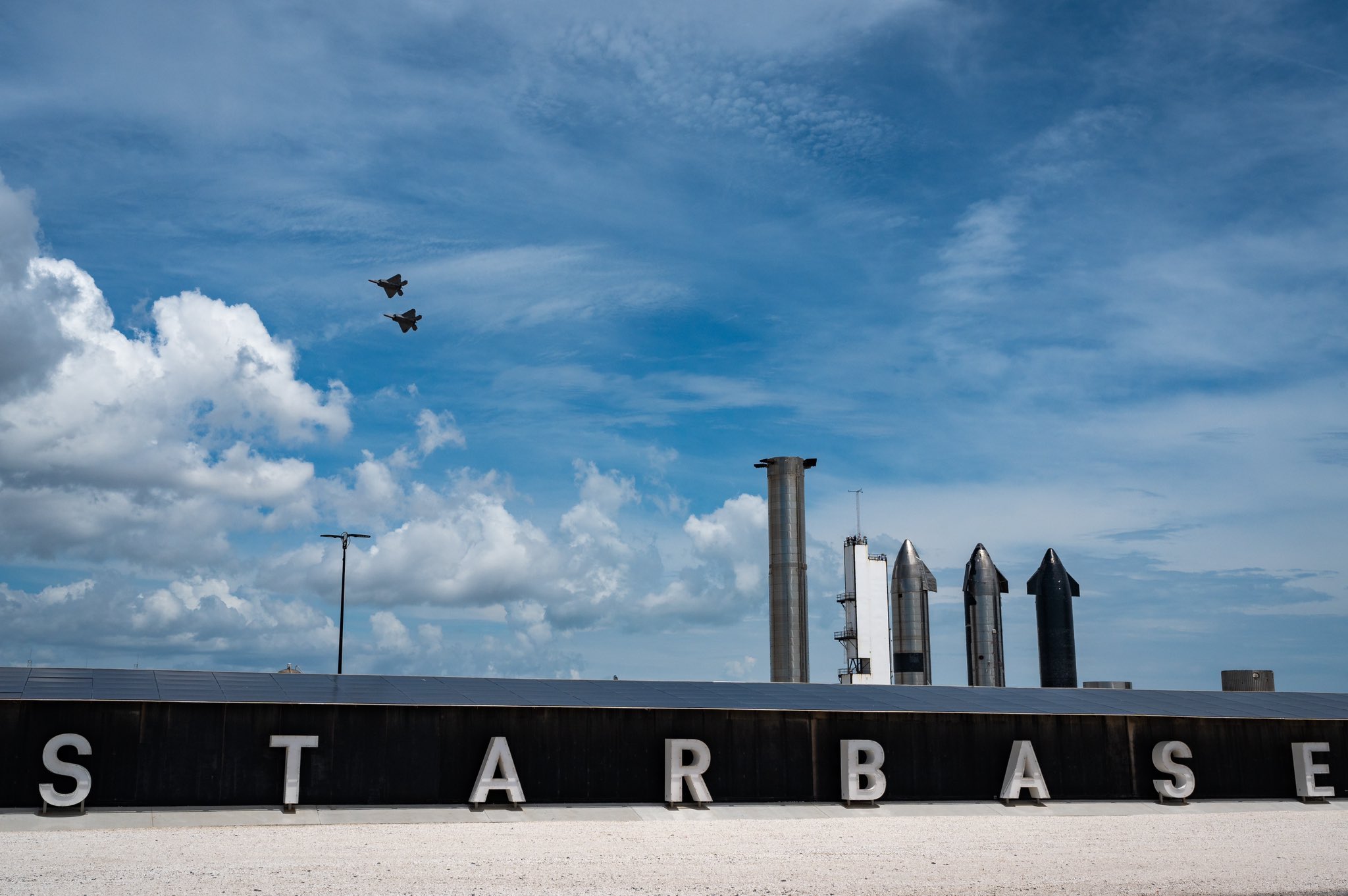 The F-22 Demonstration Team and Heritage Flight Team visited Starbase earlier today and flew by Starship. The demo team flies the United States Airforce’s Lockheed Martin F-22 Raptor at airshows all over the world demonstrating the dizzying maneuvers of the aircraft.

The crew was in town for San Padre Island’s Roar by the Shore Air and Space Expo which runs through tomorrow, August 28.

Earlier this morning the official Twitter account for the F-22 Demonstration Team shared that they would be flying over South Padre Island, Texas, and would have two demonstrations. The first demo took place at 11:40 am CST and the second one at 1:22 CST. The second one included an Air Force Heritage Flight Foundation with a P-51 Mustang.

It was great to rocket past @SpaceX 🚀

On Friday, the Air Force Heritage Flight Foundation also tweeted that “Tuna” was ready for the Roar by the Shore and invited the community to catch the P-51 “Bum Steer” soaring through South Padre over the weekend.

Who's ready for Roar by the Shore? "Tuna" is 🙋‍♂️🙋‍♂️🙋‍♂️ Be sure to catch Heritage Flight's P-51 "Bum Steer" soaring through South Padre this weekend with the @f22demoteam pic.twitter.com/gTW5MVYCnV

Austin Barnard, who captures beautiful photos of Starship and other rocket launches, shared photos that he took of the crew as they flew over Starbase and Starship. In his photos, you can see the two aircraft skillfully maneuver around the rockets that will one day bring humans to Mars.

A F-22 Raptor seen escorted by a P-50 Mustang riding around the Star Garden pic.twitter.com/sSSVE86GJ5

Eric Spaceflight shared a video on Instagram of the F22 demo team flying around Starbase. According to the caption, the team is in the Brownsville area for the South Padre Island Air Show and they were practicing on Thursday and made a pass near Starbase.

The flyover took place a few hours before Elon Musk and T-Mobile CEO, Mike Sievert, took the stage to announce the new partnership between T-Mobile and SpaceX. The new partnership will allow T-Mobile phones to be connected to Starlink satellites next year ending mobile dead zones. It will also be life-saving during disasters such as hurricanes and fires. These disasters can destroy communications infrastructure leaving people disconnected and without access to communications.